Global Development Professionals Network. Why Bad Bosses Sabotage Their Teams - Bosses who crave power but fear they might lose it can undermine their teams’ productivity. The dreaded Bad Boss comes in many varieties. 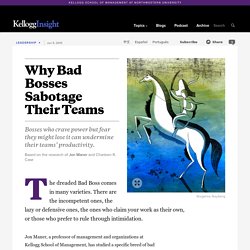 There are the incompetent ones, the lazy or defensive ones, the ones who claim your work as their own, or those who prefer to rule through intimidation. Jon Maner, a professor of management and organizations at Kellogg School of Management, has studied a specific breed of bad boss—those who intentionally sabotage their teams’ cohesion in order to protect their own status as leader. Maner’s research shows that leaders will intentionally sideline high-performing team members, limit communication and social bonding among team members, or compile ill-matched teams if they think it will help ensure their own place at the top.

American, US resident extremists defect in Somalia. By ABDI GULED, Associated Press MOGADISHU, Somalia (AP) — The defections of two fighters, an American and a U.S. resident, from Somalia's Islamic extremist rebels highlight tensions within al-Shabab over whether it should remain affiliated to al-Qaida or switch allegiance to the Islamic State group, an al-Shabab commander said Tuesday. 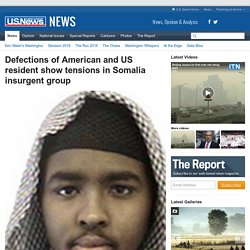 Foreign fighters are being alienated and feel trapped in Somalia over suspicions that they are plotting to switch allegiance to the Islamic State group fighting in Syria and Iraq, Abu Mohammed, a military commander with Al-Shabab told The Associated Press. Cutting lifelines: 'If we can't send money home everyone suffers' Somalia’s Promised but Problematic National Elections. Residents welcome Somalia’s President Hassan Sheikh Mohamud in Barawe. 12 October 2014. 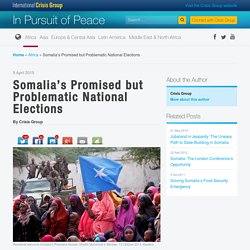 Reuters. Why we shouldn't get too excited about using big data for development. Since the proposed sustainable development goals (SDGs) were tabled in 2014, the debate about whether the goals and targets are too many to measure has raged on. 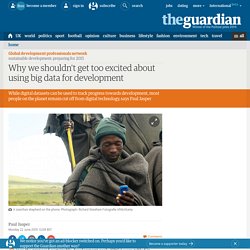 The adage goes – “we can’t manage what we can’t measure” – so big data has been presented as the answer to our measurement woes. But can it save the day? Big data is a moniker for the astonishing amount of information that is created as a byproduct of the growing digitisation of our lives – our use of mobile phones, social networks, mobile money, search engines, online shopping, dating apps and so on. Global Financial Services In Conflict Zones: Banking In Egypt, Libya, Syria, Somalia And Other Countries Where Financial Services Have Fled. Somalia's Premier Bank to bring ATMs, debit cards to Mogadishu. South Africa's ageing white mercenaries who helped turn tide on Boko Haram. En Somalie, des Chabab affaiblis mais plus dangereux. Combien de fois sa mort imminente a-t-elle été annoncée ? 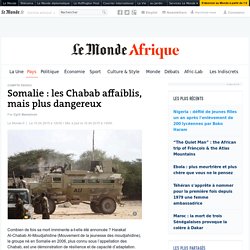 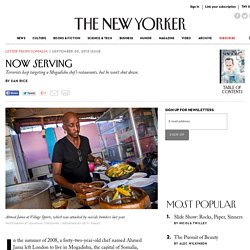 To his family and friends, it was a puzzling decision. Twenty years earlier, Jama had arrived at Heathrow Airport with a forged passport, no local contacts, and little command of English. Now Serving - The New Yorker. U.S. Bank That Handles Majority of Money Transfers to Somalia Closes Hawala Accounts - Sahan Journal. Somali-Americans in Minnesota rally in 2012, after a bank that supported the money transfers services withdrew from those transactions. 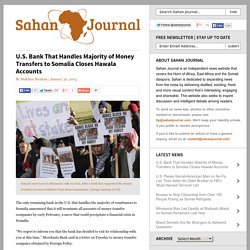 [Image courtesy of AP] The only remaining bank in the U.S. that handles the majority of remittances to Somalia announced that it will terminate all accounts of money transfer companies by early February, a move that could precipitate a financial crisis in Somalia. “We regret to inform you that the bank has decided to exit its relationship with you at this time,” Merchants Bank said in a letter on Tuesday to money transfer compaies obtained by Foreign Policy.

The accounts are set to close on February 6. Merchants Bank handles between 60 to 80 percent of the remittances sent annually from the United States to Somalia. The hawala, an informal system of money transfer, has played a crucial role in sustaining Somali households, as the war raged on for two decades and the country’s economy faltered to almost nothing. Profit and Loss in Somalia. It was lunchtime on Christmas Day in Mogadishu, and Brett Fredricks was doing what he loved. 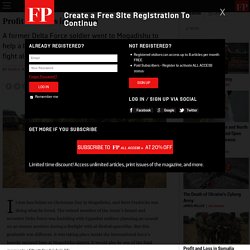 The retired member of the Army’s famed and secretive Delta Force was huddling with Ugandan soldiers planning an assault on an enemy position during a firefight with al-Shabab guerrillas. Afghan police struggle as US watchdog finds holes in payroll data. With international troops leaving the battlefields of Afghanistan, the country’s own forces are now in charge of securing the peace. 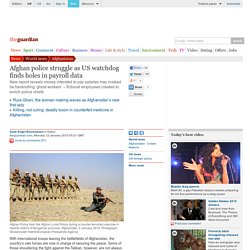 Some of those shouldering the fight against the Taliban, however, are not always being paid. Each year, foreign donors pay hundreds of millions of dollars to fund salaries for members of the Afghan national police. According to a US government watchdog, however, there is little proof of where the money ends up. Mills & Reeve Procurement Portal Home - Public Procurement Law Advice. The United Nations: more consultants, fewer rights. UN labour policy needs to be fixed GENEVA The United Nations both here in Geneva and worldwide is relying increasingly on consultants with short-term contracts to do its work, seriously hampering the organization’s overall professionalism. 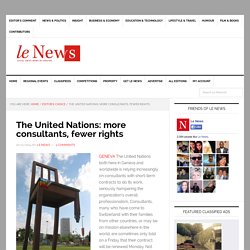 Celebration and fine art as Somalia emerges from civil war. Boots on the Ground. Government Technology Implications: Budgets and Commitment Accounting « Sustainable Public Financial Management. This is section 2.3 of a series of blog entries creating a Government IFMIS Technology Evaluation Guide. This includes information to assist in evaluating IFMIS options and the technology requirements for FreeBalance IFMIS implementations. These series will be combined with feedback to produce a comprehensive Technology Evaluation Guide to be published on our web site. Government financial management is different from the private sector, particularly for budgets and commitments. This is often called ‘Commitment’ or ‘Encumbrance’ accounting. Financial Accounting relates to transactions that affect the General Ledger such as revenue, payroll and purchasing. Private sector accounting focuses on the ability of companies to manage for the “bottom line”: profit.