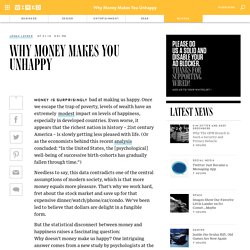 Once we escape the trap of poverty, levels of wealth have an extremely modest impact on levels of happiness, especially in developed countries. Even worse, it appears that the richest nation in history – 21st century America – is slowly getting less pleased with life. (Or as the economists behind this recent analysis concluded: “In the United States, the [psychological] well-being of successive birth-cohorts has gradually fallen through time.”)

Needless to say, this data contradicts one of the central assumptions of modern society, which is that more money equals more pleasure. That’s why we work hard, fret about the stock market and save up for that expensive dinner/watch/phone/car/condo. But the statistical disconnect between money and happiness raises a fascinating question: Why doesn’t money make us happy? New tech money is destroying the streets of San Francisco. SAN FRANCISCO (MarketWatch) — The City by the Bay is famous for its steep hills, clanging cable cars, enveloping fog and stately Victorian-era homes. 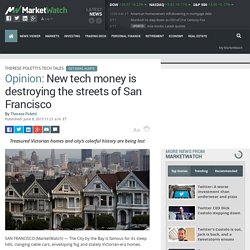 But these days, in the current tech-fueled real estate boom, many of these lovely Victorians are nothing more than a facade, as if they were on a Hollywood set. It is now hard to find a Victorian home for sale that has not been gutted, its architectural details stripped and tossed. And owners or developers — looking to sell at a premium in the frenzied real estate market to “techies with cash” — hope to appeal to the tastes (or lack thereof) of current buyers, by turning once-charming homes with detailed woodwork, built-ins and art glass, into clones of Apple’s minimalist retail stores. This trend has been developing for several years, but it seems far more prevalent today, with construction sites sprouting across the Bay Area and especially in San Francisco. 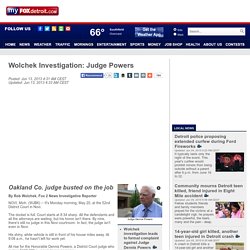 (WJBK) -- It's Monday morning, May 20, at the 52nd District Court in Novi. The docket is full. Court starts at 8:34 sharp. His shiny, white vehicle is still in front of his house miles away. All rise for the Honorable Dennis Powers, a District Court judge who makes $138,272 a year in taxpayer money. Jaron Lanier as Speaker. The Next Five Hundred Years of Communication Every technology visionary holds in his or her heart an extravagant image of what happens when computers, user interfaces, and networks are developed to their limit. 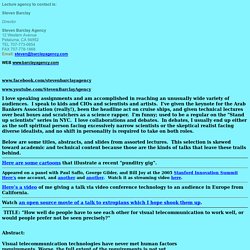 In some cases, as with McLuhan, natural languages disappear and are replaced by a universal mesh of direct brain links. Science Fiction writers and Artificial Intelligence believers sometimes imagine the emergence of a new global-scale consciousness that would be separate from and "higher level" than people. Each of these visions is a projection of core beliefs about epistemology and the nature of personhood. In my case, my core optimistic mysticism has lead me to propose an alternate future of communication. In the Post Symbolic scenario, VR equipment has become ubiquitous (30 years from now), is accompanied by marvelous software authoring tools (100 years from now- software takes so long!) IAmA: search results. Life Hack: How to Live Rent-Free in NYC by Roberto Gonzalez.

This course will never be discounted. 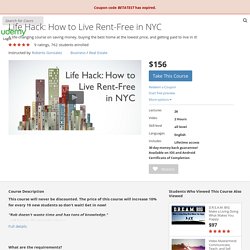 The price of this course will increase 10% for every 10 new students so don't wait! Get in now! "Rob doesn't waste time and has tons of knowledge. " - Jeff Ramos, The Narrative Group "...a little update, thanks to you I am only paying about $100 a month for rent and paying off my credit cards!! " “This class was amazing. What is the biggest obstacle you face in pursuing your dreams here in New York City? Save money painlesslyAvoid the biggest mistakes made by NYC home-buyersBuy the very best NYC home - at the lowest possible price - and get paid to live in it! Www.copainter.org. 25 Websites To Download Free STL Models For 3D Printers. 3D printers are going mainstream, as more consumers warm up to and adopt the idea of 3D printing. The Micro, for example, is a Kickstarter project for a 3D printer for consumers.

It was funded in mere minutes. But you can’t start printing once you get your printer. You will need to get the materials and more importantly the blueprint to printout your product. If 3D modelling sounds difficult to you, fret not, the Web is filled with sites that offer users free 3D models to print on their printers free of charge. Recommended Reading: 10 Things You Need To Know Before Buying A 3D Printer Pinshape Pinshape is a next generation 3D printing community & marketplace for brands, designers and makers. [Visit page] Thingiverse Thingiverse is a website operated by MakerBot Industries, the creators of the popular Replicator series of 3D printers.