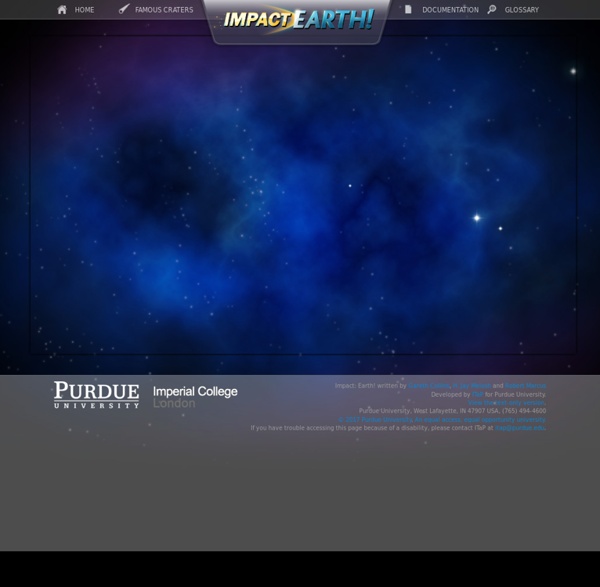 The Definition of Love You can stop taking quizzes in Cosmo. Here’s what love really is. Love is still wanting to hold someone after you climax. After the initial euphoria from the orgasm wears off, you’re replaced with a sense of calm rather than a panic. You don’t want to search for your clothes, scramble to find your keys and figure out the best way to tell them, “See ya later forever!”

Secret Worlds: The Universe Within - Interactive Java Tutorial Secret Worlds: The Universe Within View the Milky Way at 10 million light years from the Earth. Then move through space towards the Earth in successive orders of magnitude until you reach a tall oak tree just outside the buildings of the National High Magnetic Field Laboratory in Tallahassee, Florida. After that, begin to move from the actual size of a leaf into a microscopic world that reveals leaf cell walls, the cell nucleus, chromatin, DNA and finally, into the subatomic universe of electrons and protons. Once the tutorial has completely downloaded, a set of the arrows will appear that allow the user to increase or decrease the view magnitude in Manual mode.

Symbols and their meaning SYMBOLS and their Meaning Introduction Occult symbols are fast replacing Christian symbols in our culture. Therefore, we encourage you to use this list to warn others, especially Christian children who intentionally wear and display them because they are popular. Keep in mind that some of these symbols have double meanings.

Flying Spaghetti Monster The Flying Spaghetti Monster (FSM) is the deity of the Church of the Flying Spaghetti Monster or Pastafarianism, a movement that promotes a light-hearted view of religion and opposes the teaching of intelligent design and creationism in public schools.[3] Although adherents describe Pastafarianism as a genuine religion,[3] it is generally seen by the media as a parody religion.[4][5] The "Flying Spaghetti Monster" was first described in a satirical open letter written by Bobby Henderson in 2005 to protest the Kansas State Board of Education decision to permit teaching intelligent design as an alternative to evolution in public school science classes.[6] In that letter, Henderson satirized creationist ideas by professing his belief that whenever a scientist carbon-dates an object, a supernatural creator that closely resembles spaghetti and meatballs is there "changing the results with His Noodly Appendage". History Internet phenomenon

Shakespeare Insult Kit Shakespeare Insult Kit Since 1996, the origin of this kit was listed as anonymous. It came to me on a piece of paper in the 90's with no attribution, and I thought it would make a cool web page. Though I searched for the origin, I could never find it. Dark Art by Anton Semenov Article by James Pond I am the owner of Pondly.com / art lover / electrical engineer / software developer / MBA in e-business student. I blog for pleasure and love to share my Internet findings. Web site: Physics Flash Animations We have been increasingly using Flash animations for illustrating Physics content. This page provides access to those animations which may be of general interest. The animations will appear in a separate window. The animations are sorted by category, and the file size of each animation is included in the listing. Also included is the minimum version of the Flash player that is required; the player is available free from The categories are:

Love,Peace&LO dylanthescientist: princetanaka: just a small town girl. List of collective nouns by collective term A-K A skein of geese This is a list of traditional or whimsical collective nouns. The large number of collective nouns in English is based on a tradition of venery (words for groups of animals) which arose in the Late Middle Ages. Standard terms for particular groups are listed first in each group and shown in bold. See also[edit] References[edit] Smart tips to make life easier Posted on February 24, 2012 in Humor If you’re new here, you may want to subscribe to our RSS feed or follow us on Facebook or Twitter . Thanks for visiting! Rate this Post (16 votes, average: 5.00 out of 5) Loading... www.burnmonkey.com/burning_man_best/content/IMG_1434_mod_large.html Home About Photo Tutorials Burning Man Stories

Transit Agencies We’ve been following the trend of transit agencies providing developer access to timetables, routes and more for some time. Big cities, like New York and Boston are on board and helping fuel new transit applications. There now seems to be more momentum, with organizations and influencers making the call for open data. StreetFilms talked to some of these people, several within transit companies themselves, and created A Case for Open Data (embedded below). One particular case study shows just how fast developers started in on projects when Boston made its data available.