The Gut Wrenching Reality: One of the Best Bug-Out Strategy Guides You'll Ever Read. Thumbnail. So Why Be Concerned About the Data Tracking of Personally Identifiable Information? A Congressional Candidate Tells You Why. What questions are on your district’s kindergarten enrollment form? 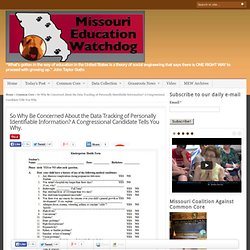 Who is accessing this information and why? There has been a spirited discussion on a Facebook thread about information needed on a kindergarten admission form about the mother’s pregnancy: details of how the child was delivered and if the baby was premature. This is ostensibly to determine if the child is suffering any delays from a difficult birthing process and would aid educational professionals for teaching strategies. Common Sense About the Common Core. This is a guest post by Alan Schoenfeld, a professor of Mathematics Education at the University of California, Berkeley. 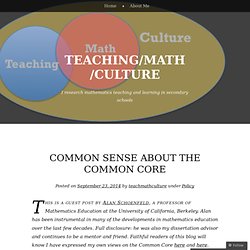 Alan has been instrumental in many of the developments in mathematics education over the last few decades. Full disclosure: he was also my dissertation advisor and continues to be a mentor and friend. Faithful readers of this blog will know I have expressed my own views on the Common Core here and here. Is the Common Core the best thing since sliced bread, or the work of the devil? NC Common Core review commission holds first meeting, elects supporter of standards as its co-chair. 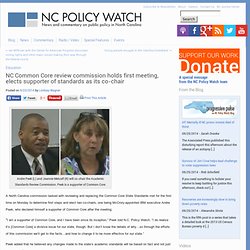 “I am a supporter of Common Core, and I have been since its inception,” Peek told N.C. Policy Watch. Thumbnail. Mark Alexander: ObamaCore: 'Why Johnny [Still] Can't Read' Alexander's Column. 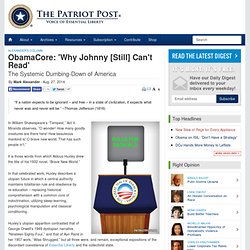 Of Course ISIS Would Pick Chicago - For More Reasons Than You Think - Europe is burning our forests for “renewable” energy. Wait, what? If you’re driving through the South and you see a denuded field filled with stubby new plantings where lush forest once stood, the blame might lie with an unlikely culprit: the European Union and its well-intentioned clean energy rules. 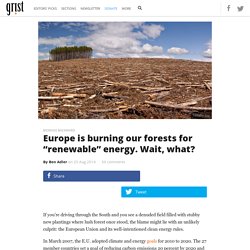 In March 2007, the E.U. adopted climate and energy goals for 2010 to 2020. The 27 member countries set a goal of reducing carbon emissions 20 percent by 2020 and increasing renewables to 20 percent of their energy portfolio. EXCLUSIVE: EVIDENCE RE: OBAMA CRIMINAL INVESTIGATION. Michael Thomas 3-8-14 How is the Obama criminal probe related to the preplanned Ukraine ‘Color Revolution’ executed by the Anglo-American Axis? 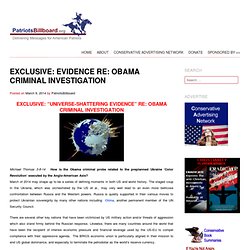 March of 2014 may shape up to be a series of defining moments in both US and world history. The staged coup in the Ukraine, which was orchestrated by the US et al., may very well lead to an even more bellicose confrontation between Russia and the Western powers. Russia is quietly supported in their various moves to protect Ukrainian sovereignty by many other nations including China, another permanent member of the UN Security Council. There are several other key nations that have been victimized by US military action and/or threats of aggression which also stand firmly behind the Russian response.

35 countries where the U.S. has supported fascists, drug lords and terrorists. The U.S. is backing Ukraine’s extreme right-wing Svoboda party and violent neo-Nazis whose armed uprising paved the way for a Western-backed coup. 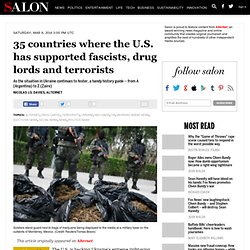 Events in the Ukraine are giving us another glimpse through the looking-glass of U.S. propaganda wars against fascism, drugs and terrorism. The ugly reality behind the mirror is that the U.S. government has a long and unbroken record of working with fascists, dictators, druglords and state sponsors of terrorism in every region of the world in its elusive but relentless quest for unchallenged global power. Camouflage Photo Series Shows Just How Well Snipers Can Hide in Plain Sight. We spend all day staring at pixels, but really, just how good is our vision when it comes to noticing the small details in photographs? 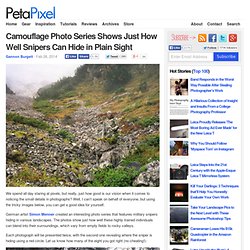 Well, I can’t speak on behalf of everyone, but using the tricky images below, you can get a good idea for yourself. German artist Simon Menner created an interesting photo series that features military snipers hiding in various landscapes. Duke Energy Corp : Investigation into N.C. coal ash spill widens. Why Facebook Just Spent $19 Billion on a Messaging App - Robinson Meyer. Facebook wants to dominate in the three areas WhatsApp excels in: apps, messaging, and usage in the developing world. 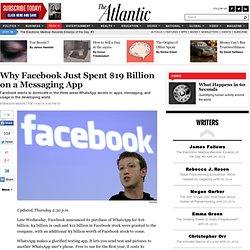 Reuters Updated, Thursday 2:30 p.m. Late Wednesday, Facebook announced its purchase of WhatsApp for $16 billion. $4 billion in cash and $12 billion in Facebook stock were granted to the company, with an additional $3 billion worth of Facebook stock to come. WhatsApp makes a glorified texting app. It lets you send text and pictures to another WhatsApp user’s phone.

Why, you may be wondering, would Facebook spend $19 billion on it? To answer, it helps to tell a story about two of my friends. Today's Fun With Maps: Where the People Are, and the Trees - James Fallows. As John Tierney mentioned recently, and as Google's Michael Jones explained in an Atlantic interview last year ago, maps are both the most rapidly evolving and often the most useful ways to make sense of changes around us. 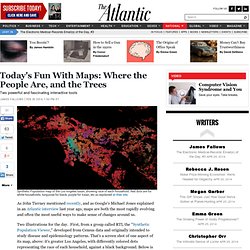 Two illustrations for the day. First, from a group called RTI, the "Synthetic Population Viewer," developed from Census data and originally intended to study disease and epidemiology patterns. That's a screen shot of one aspect of its map, above: it's greater Los Angeles, with differently colored dots representing the race of each household, against a black background. Below is how the Greenville-Greer-Spartanburg area looks, with a map background and a closer-in view. In both cases the red dots representing white households, turquoise representing black households, and others you can see online for other groupings : DARPA announces scary new web search tool for law enforcement called “Memex” DARPA – the research and science arms of the Defense industry announced its plans for “deep search” of the web. called “Memex.” Not your average web search engine. Move rover George Orwell – the Defense Advanced Research (DARPA) announced recently its new “deep web” search program for police and law enforcement called: “Memex” which will be able to search the far corners of internet content that is unattainable by modern, mainstream search engines, offering DARPA“technological superiority in the area of content indexing and Web search on the Internet.”

According to DARPA’s website: Metal-band-skinny-puppy-send-us-government-invoice-after-finding-out-their-music-was-used-as-torture-device-in-guantanamo-bay-9100005. "We heard through a reliable grapevine that our music was being used in Guantanamo Bay prison camps to musically stun or torture people," founder cEvin Key told the Phoenix New Times. "We heard that our music was used on at least four occasions. " While Metallica politely asked the US military to stop using their music for the sleep deprivation of detainees, Skinny Puppy took it one step further. HAARP, Chemtrails, Strange Phenomenon Strange Sounds (Video) Is Butter Secretly Ruining Your Health? Growing up, butter was an absolute staple in my household. We thankfully never got into the margarine craze because my mother believed that butter was good for the brain.

Turns out, she was right about that and scientists have now concluded that butter is actually good for you in other areas too. It’s high in a compound call CLA that protects you from tumor growth and cancer, is not inflammatory like man-made oils from corn, canola or soy, and provides a nice dose of Omega 3 fatty acids, if you get it from the right source. But finding the right source can be tricky given all the buzz words and fancy marketing these days. Sploid.gizmodo. 12 More Viral Photos That Are Totally Fake. Maybe the Most Orwellian Text Message a Government's Ever Sent. Image: Wikimedia.