Research Digest. 10 Ways That Running Changes Your Mind and Brain – Research Digest. By Christian Jarrett Running changes your brain wiring David Raichlen and his colleagues scanned the brains of young, competitive distance runners and controls while they rested in a scanner with their eyes open for six minutes. 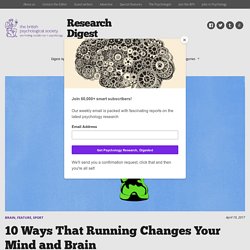 As reported in Frontiers in Human Neuroscience, the runners showed greater connectivity between the so-called frontal parietal network and other neural regions involved in working memory and self-control, which the researchers interpreted as likely due to the cognitive demands of running and the runners’ increased aerobic fitness. My life with Oliver Sacks: ‘He was the most unusual person I had ever known’ He wrote me a letter. 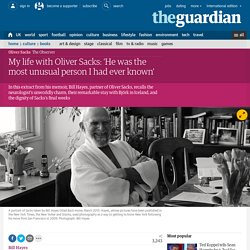 That’s how we met. He had read my book, The Anatomist, in proof, and enjoyed it. (“I meant to provide a blurb,” but “got distracted and forgot.”) This was when I was still in San Francisco – early 2008. This was when people still wrote letters regularly and when one got a letter, sat down and wrote a letter back. “Dear Mr Hayes – ” “ – Dear Dr Sacks…” Thus, a correspondence between O and me began. A month later, I happened to be in New York and, at Oliver’s invitation, paid a visit. Experience: I taught myself to see. I had to have both eyes removed by the age of one to save my life – I was born with an aggressive form of eye cancer called retinoblastoma. 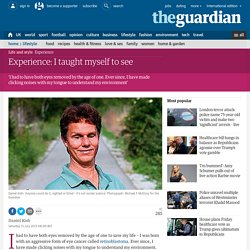 Ever since, I have made clicking noises with my tongue to understand my environment. I wasn't aware I was doing it, just as sighted people don't consciously teach themselves to see. It was only when I was 11 that a very bright friend realised that what I was doing was echolocation, the same technique that a bat flying in the dark relies on: I was navigating my surroundings by listening to the echoes as my clicks bounced off surfaces. Every surface has its own acoustic signature – I can recognise a tree, for example, because the trunk produces a different echo from the leaves. The hard wood reflects the sound, whereas the leaves reflect and refract, too, scattering the sound waves. Donald Trump: Psychiatry professors say 'dangerous' US President must be removed from post for public safety. Scientists win 1m euro brain prize for understanding reward. Image copyright SPL The winners cracked the brain's "reward centre".It influences your happiness, pleasure or motivation to do something.But the system can go wrong turning people become into addicts. 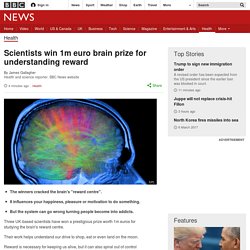 Three UK-based scientists have won a prestigious prize worth 1m euros for studying the brain's reward centre. Their work helps understand our drive to shop, eat or even land on the moon. No cookies? Is ‘Gaydar’ Really a Thing? The evidence for the psychological benefits of animals is surprisingly weak. To see a man’s face light up as he strokes a dog, to hear a child’s laughter as her hamster tickles her skin, it just seems obvious that animals are good for our state of mind. 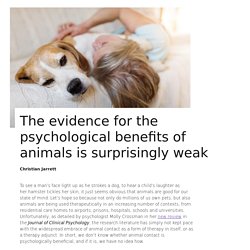 Let’s hope so because not only do millions of us own pets, but also animals are being used therapeutically in an increasing number of contexts, from residential care homes to airports, prisons, hospitals, schools and universities. Unfortunately, as detailed by psychologist Molly Crossman in her new review in the Journal of Clinical Psychology, the research literature has simply not kept pace with the widespread embrace of animal contact as a form of therapy in itself, or as a therapy adjunct. In short, we don’t know whether animal contact is psychologically beneficial, and if it is, we have no idea how.

After several decades of animal-human interaction research, Crossman explains that the evidence is mixed: some studies have found benefits, others have not. Four-year-olds’ knowledge of gender stereotypes foretells their gender bias a year later. Group loyalty is woven into our DNA. 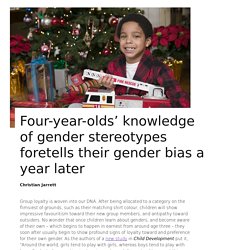 After being allocated to a category on the flimsiest of grounds, such as their matching shirt colour, children will show impressive favouritism toward their new group members, and antipathy toward outsiders. No wonder that once children learn about genders, and become aware of their own – which begins to happen in earnest from around age three – they soon after usually begin to show profound signs of loyalty toward and preference for their own gender.

As the authors of a new study in Child Development put it, “Around the world, girls tend to play with girls, whereas boys tend to play with boys. Such stark separation is stunning, yet as adults we tend to accept this segregation without a thought and sometimes even encourage it.” The aim of the new research was to find out how gender-biased beliefs and behaviour develop from age four to five. What do dreams mean? The five most common explained. Bad With Names? Don't Blame Yourself, Blame Your Brain. The more connections your brain can make with a new memory, the easier it is for you to recall said memory. 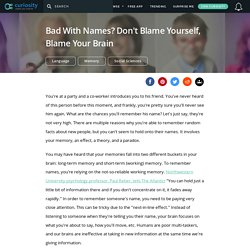 McGill University psychologist Donald Olding Hebb summarizes this idea with his Hebbian Theory: "Cells that fire together, wire together. Cells that fire out of sync, lose their link. " What assumptions do we make about people when we first meet them? Most personality traits and other characteristics are “normally distributed”, meaning that a new person is more likely to be in the middle than on the extremes, whether we’re talking about extraversion, intelligence or enthusiasm for Mexican food. 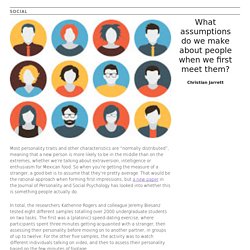 There's A Reason Why You Still Love The Music From Your Teen Years. It's probably the latter. 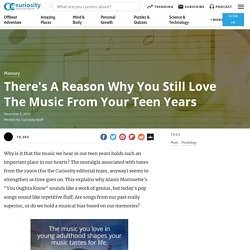 Psychologists and neuroscientists have recently determined that musical nostalgia isn't just a cultural phenomenon—it's wired in our brains. Lord Nelson’s Traumatic Brain Injury. Psychopaths Have Regrets: Can Early Help and Love Save Them? The Psychology of Eye Contact, Digested – Research Digest. By Christian Jarrett Many of our relationships begin with that moment when our eyes meet and we realise the other person is looking right at us. 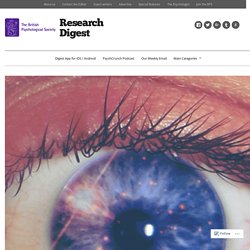