MathsStarters - A great start to your maths lesson. 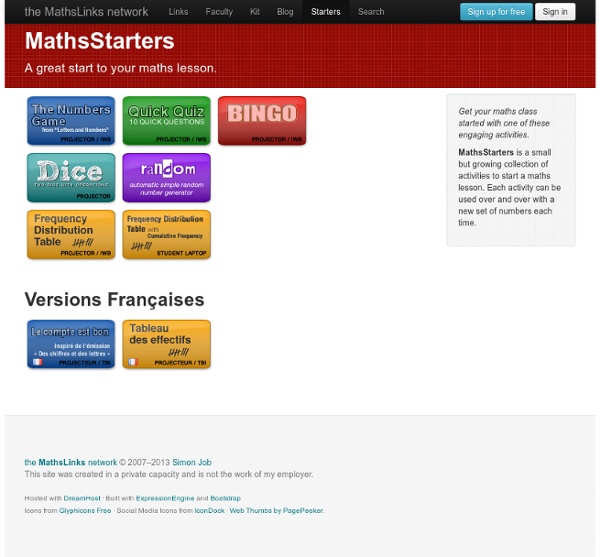 A+Click SMS SMS stands for Short Math Situation. Don’t confuse with SMS (Short Message Service), which is used as an acronym for all types of short text messaging. The last one is the most widely used data application in the world with several billion active users. If the length of the SMS text messages is limited to 140 characters, the Short Math Situation questions are limited to 64 characters. Everything should be made as short as possible, but no shorter. A+Click SMS are:

CEMC - Math Circles The Waterloo Math Circles is a free weekly enrichment activity for grade 6 to 12 students organized by the Faculty of Mathematics of the University of Waterloo. Registration All students interested in attending the Fall Math Circles in 2014/15 will need to register. Space in the program is limited – register early. The 2014/15 program will begin the week of October 6th, 2014.

KS2 Number Properties & Ordering Drag and drop the number tiles to their correct position on the Venn diagram. Place the number tiles into the correct order on the track. There are 3 levels of difficulty. Seven Blunders of the World The Seven Social Sins, sometimes called the Seven Blunders of the World, is a list that Mohandas Karamchand Gandhi published in his weekly newspaper Young India on October 22, 1925.[1] Later, he gave this same list to his grandson Arun Gandhi, written on a piece of paper, on their final day together, shortly before his assassination.[2] The seven sins or blunders are: History and influence[edit] Mahatma Gandhi, who published the list in 1925 as a list of "Seven Social Sins" (1940s photo) The list was first published by Mohandas Karamchand Gandhi in his weekly newspaper Young India on October 22, 1925.[1]

Hello and welcome to my 34th gems post. This is where I share five teaching ideas I've seen on Twitter. The summer holidays are finally here! Let's be honest though - although it's lovely to have the opportunity to rest and play, the majority of us do a fair amount of school work over summer - creating resources, organising and tidying, preparing for September, catching up on reading... Fields Institute - Math Circles NEWS 2014: Math Circles Instructors wanted! (Apply here) Math Circles at the Fields Institute is looking for new volunteers to teach bright high school students interesting topics in mathematics. The goal of Math Circles is to introduce different topics in mathematics not necessarily taught in school, while keeping things fun! In particular, we are looking for instructors to do one of the following topics: Introduction to Real Analysis Introduction to Graph Theory Introduction to Topology Introduction to Groups and Rings The Game of Go Game Theory Optimization

Games Make A Pattern Complete The Pattern Make Moon Rock Patterns Crazy Pattern Machine - 5 Levels Counting Games 10 Innovative Ways to Use ThingLink in the Classroom by Susan Oxnevad It starts with an image. Define the image through multimedia. Present ideas. Pack it full of content.

I think this is one of the great Math websites. Highly recommend. by allanquartz Mar 24