Logic Puzzles - Solve Online or Print Your Own for Free! 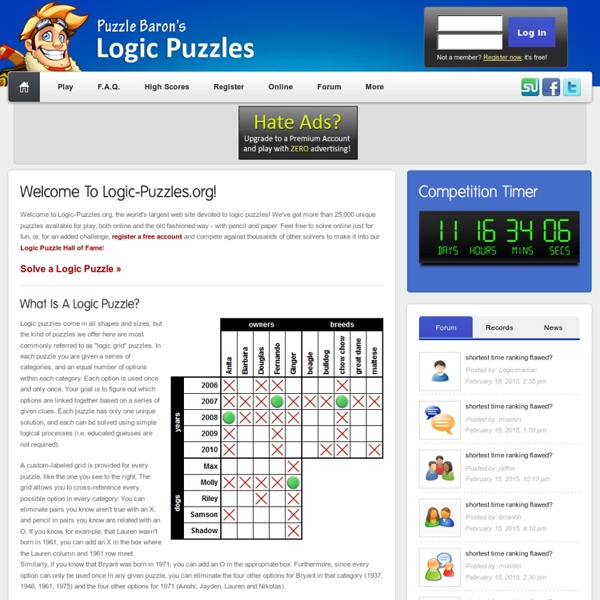 Modern X-ray technology reveals Archimedes' math theory under forged painting Stanford Report, August 9, 2006 Archimedes Palimpsest Project Bergmann, left, and Noel place fragments from the Archimedes Palimpsest in front of the X-ray beam. A scan of the palimpsest reveals vertical text hidden beneath the paint. After more than 1,000 years in obscurity, the last unreadable pages of the works of ancient mathematician Archimedes are being deciphered, thanks to the X-ray vision at the Stanford Linear Accelerator Center (SLAC), which Stanford operates for the U.S. "It is amazing how much the Archimedes Palimpsest project has gained from Stanford University," said Will Noel, curator of manuscripts and rare books at the Walters Art Museum in Baltimore, where the document is housed. The manuscript uniquely records several of the works of the legendary 3rd century B.C.E. mathematician, who famously exclaimed "Eureka!" In the 10th century, an anonymous scribe copied Archimedes' treatises in the original Greek onto the parchment. Archimedes rediscovered

Purplemath Game Theory 101: Game Theory Made Easy Rader's NUMBERNUT.COM 10 Websites With Fun Tests To Gauge Your IQ Intelligence Quotient (IQ) is a term that’s related to the wattage of your brain; in short intelligence and reasoning skills measured across a few standardized tests. Before an inferiority complex starts laying its foundation, remember that I.Q is not a measure of knowledge or its practical application. To rub our egos the right way, you might take a few serious approved tests and arrive at your IQ. Me? FunEducation Try out the array of tests on this site which include a range of serious self discovery tools and fun quizzes. 3SmartCubes If you are looking for a range of tests that measure everything from IQ to your EQ (Emotional Quotient), then this site deserves to be bookmarked. Free IQ Test Just like the name says, this site is a place for a fast, free, and accurate online IQ test. IQ League The 60 Seconds IQ Test on this site is a fun and fast test which pits you against a clock as it countdowns to the minutes on the 10 questions. own system Test Yourself Magic Mnemonic Color IQ Test

120 Ways to Boost Your Brain Power Here are 120 things you can do starting today to help you think faster, improve memory, comprehend information better and unleash your brain’s full potential. Solve puzzles and brainteasers.Cultivate ambidexterity. Use your non-dominant hand to brush your teeth, comb your hair or use the mouse. Write with both hands simultaneously. Readers’ Contributions Dance! Contribute your own tip! There are many, many ways to keep our brains sharp.