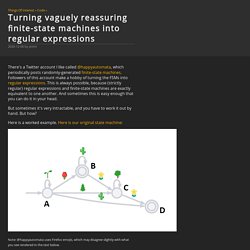 Followers of this account make a hobby of turning the FSMs into regular expressions. This is always possible, because (strictly regular) regular expressions and finite-state machines are exactly equivalent to one another. And sometimes this is easy enough that you can do it in your head. But sometimes it's very intractable, and you have to work it out by hand. But how? Here is a worked example. Note: @happyautomata uses Firefox emojis, which may disagree slightly with what you see rendered in the text below. Note that I have added labels to the four states in our state machine: , , and . 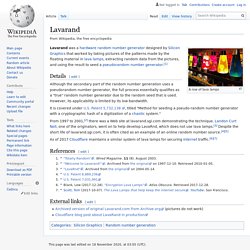 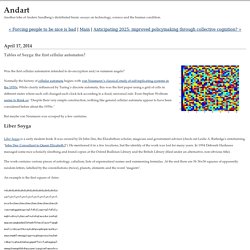 Was the first cellular automaton intended to do encryption and/or summon angels? Normally the history of cellular automata begins with von Neumann’s classical study of self-replicating systems in the 1950s. While clearly influenced by Turing’s discrete automata, this was the first paper using a grid of cells in different states where each cell changed each clock tick according to a fixed, universal rule. Even Stephen Wolfram seems to think so: "Despite their very simple construction, nothing like general cellular automata appear to have been considered before about the 1950s. " But maybe von Neumann was scooped by a few centuries. USS Lab. - Ubiquitous System Security Lab. On iPhone SE On Amazon Echo In the supermarket Introduction Speech recognition (SR) systems such as Siri or Google Now have become an increasingly popular human-computer interaction method, and have turned various systems into voice controllable systems (VCS). 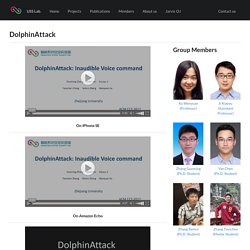 Prior work on attacking VCS shows that the hidden voice commands that are incomprehensible to people can control the systems. Lenia - Wiki. BadBIOS. Ruiu claims the virus is able to infect the BIOS of computers running Windows, Mac OS X, BSD and Linux as well as spread infection over USB flash drives.[4] Rob Graham of Errata Security produced a detailed analysis[5] of each element of the claims about BadBIOS's capabilities describing the software as "plausible", whereas Paul Ducklin on the Sophos Naked Security blog[6] suggested "It's possible, of course, that this is an elaborate hoax".[1] After Ruiu posted data dumps which supposedly demonstrated the existence of the virus, "all signs of maliciousness were found to be normal and expected data".[7] In December 2013 computer scientists Michael Hanspach and Michael Goetz released a paper to the Journal of Communication demonstrating the possibility of an acoustic mesh networking at a slow 20 bits per second using a set of speakers and microphones for ultrasonic communication in a fashion similar to BadBIOS's described abilities.[8] See also[edit] References[edit] 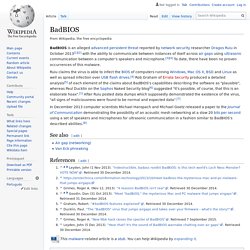 Wat. Bodyfuck. In the Winter of 2009-2010 I made a certain esoteric programming language more difficult to use. bodyfuck is an implementation of brainfuck that uses a camera as input. 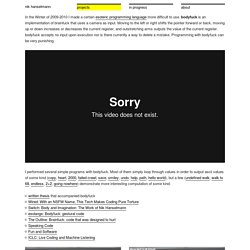 Moving to the left or right shifts the pointer forward or back, moving up or down increases or decreases the current register, and outstretching arms outputs the value of the current register. bodyfuck accepts no input upon execution nor is there currently a way to delete a mistake. Programming with bodyfuck can be very punishing. I performed several simple programs with bodyfuck.

Most of them simply loop through values in order to output ascii values of some kind (copy, heart, 2000, failed crawl, save, smiley, undo, help, path, hello world), but a few (undefined walk, walk to 68, endless, 2+2, going nowhere) demonstrate more interesting computation of some kind. Kvikkalkul - Esolang.

This article is a stub, which means that it is not detailed enough and needs to be expanded. 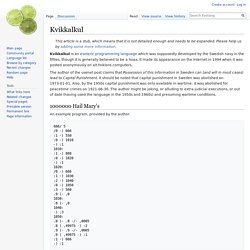 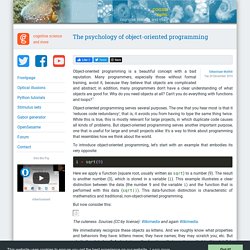 Many programmers, especially those without formal training, avoid it, because they believe that objects are complicated and abstract; in addition, many programmers don't have a clear understanding of what objects are good for. Why do you need objects at all? Can't you do everything with functions and loops? Object-oriented programming serves several purposes. The one that you hear most is that it 'reduces code redundancy'; that is, it avoids you from having to type the same thing twice. 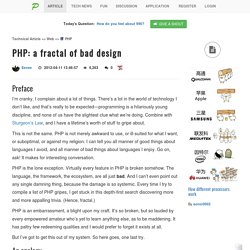 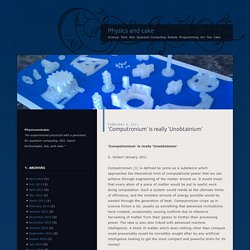 Gildert January 2011. Surprisingly Turing-Complete · Gwern.net. ‘Computers’, in the sense of being Turing-complete, are extremely common. Almost any system of sufficient complexity—unless carefully engineered otherwise—may be found to ‘accidentally’ support Turing-complete somewhere inside it, even systems which would appear to have not the slightest thing to do with computation. Software systems are especially susceptible to this, which often leads to serious security problems as the Turing-complete components can be used to run attacks on the rest of the system.I provide a running catalogue of systems which have been, surprisingly, demonstrated to be Turing-complete. (TC) is (avoiding the rigorous formal definition) the property of a system being able to, under some simple representation of input & output, compute any program of interest, including another computer in some form.

“Any sufficiently complicated C or Fortran program contains an ad hoc, informally-specified, bug-ridden, slow implementation of half of Common Lisp.” And so on.