Howl's moving castle. This Game Takes 8,400,000,000,000 Years to Play. Raiders of the Lost Art - Sub Terra 2 Designer's Diary #3. As a programmer/designer/part-time-robot, I usually think of games as complex mathematical systems, with players trying to rationally extract as much value from their actions as possible. 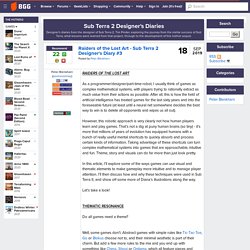 After all, this is how the field of artificial intelligence has treated games for the last sixty years and into the foreseeable future (at least until a neural net somewhere decides the best way to win is to delete all opponents and wipes us all out). However, this robotic approach is very clearly not how human players learn and play games. Rob's Puzzle Page - Interlocking Puzzles. This section covers interlocking puzzles - wherein multiple pieces fit together such that the puzzle does not fall apart and presents a challenge to disassemble and re-assemble. 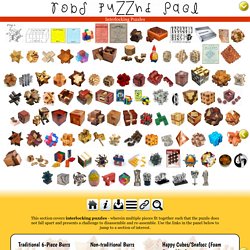 Use the links in the panel below to jump to a section of interest. Traditional 6-Piece Burrs Any story about interlocking puzzles has to start with the traditional six-piece burr puzzle. Wikipedia prank leads to New Zealand farmer being reincarnated as legendary Japanese creature in Ris - Tabletop Gaming. Rising Sun, Eric Lang’s spiritual successor to Blood Rage, is heavily inspired by Japanese folklore and mythology – but one of its legendary creatures is a legend of a very different kind. 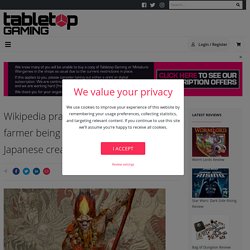 The game raised more than $4 million from over 31,000 backers on Kickstarter last year, unlocking a number of stretch goals as it rocketed up the list of the highest-funded games to ever grace the crowdfunding platform. Among the stretch goals was the addition of multiple Kickstarter-exclusive monsters derived from Japanese myth and legend, including Nure-Onna, Sunakake Baba, Jikininki and Kõtahi. Joke chess problem. Chess puzzle that uses humor Self-solving problems[edit] V. 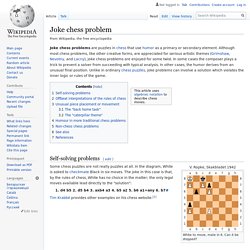 Ropke, Skakbladet 1942 White to move, mate in 6. Can it be stopped? Some chess puzzles are not really puzzles at all. Tim Krabbé provides other examples on his chess website.[1] Offbeat interpretations of the rules of chess[edit] Rex Parker Does the NYT Crossword Puzzle. Lateral thinking puzzles, with solutions @ Things Of Interest. Lateral thinking puzzles kind of annoy me. 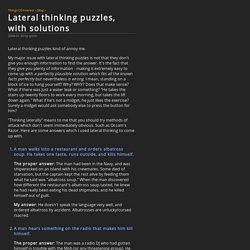 My major issue with lateral thinking puzzles is not that they don't give you enough information to find the answer. It's the fact that they give you plenty of information - making it extremely easy to come up with a perfectly plausible solution which fits all the known facts perfectly but nevertheless is wrong. I mean, standing on a block of ice to hang yourself?

Why? WHY? "Thinking laterally" means to me that you should try methods of attack which don't seem immediately obvious. A man walks into a restaurant and orders albatross soup. Romans Used 20-Sided Dice Two Millennia Before D&D. Many of us geeks take great pride in the ability to recite the history of role-playing games based on the 20-sided die, but what about the history of the die itself? 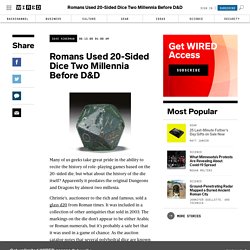 Apparently it predates the original Dungeons and Dragons by almost two millenia. Book of Elements (3.5e Sourcebook)/What are Elements? What are the Elements? 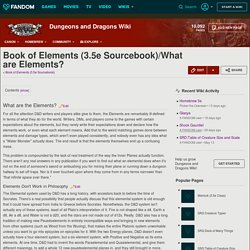 Edit For all the attention D&D writers and players alike give to them, the Elements are remarkably ill-defined in terms of what they do for the world. Writers, DMs, and players come to the games with certain expectations about the elements, but they rarely write their expectations down and declare how the elements work, or even what each element means. Add that to the weird matching games done between elements and damage types, which aren't even played consistently, and nobody even has any idea what a "Water Monster" actually does. Santorini Underworld – Promo Cards – Roxley Game Laboratory. Success fail About this capture Santorini Underworld – Promo Cards 3P, 4P (not GF)Setup: Shuffle one Simple God Power (featuring a hibiscus symbol) and five Advanced God Powers into a face-down deck in your play area.End of Your Turn: Turn over the top card of your deck. 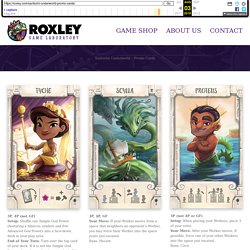 If it is not the Simple God Power, place the card under your deck. 3P, 4P, GFYour Move: If your Worker moves from a space that neighbors an opponent’s Worker, you may force their Worker into the space yours just vacated. 3P (not 4P or GF)Setup: When placing your Workers, place 3 of your color.Your Move: After your Worker moves, if possible, force one of your other Workers into the space just vacated. 3P, 4P, GFYour Turn: Instead of your normal turn, you may take a special turn in which all your Workers move and you do not build, or in which none of your Workers move, but all build.

The Ultimate Game. I've designed an awful lot of games in my time, most of them are in a file labeled "unplayable" or "to be tweaked at a later time. 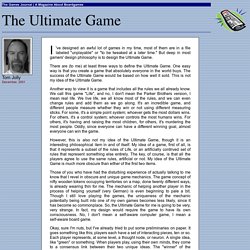