Introduction to spaceblooms. Spaceblooms emerged at the end of a remarkably long period of unprecedented growth in human knowledge. 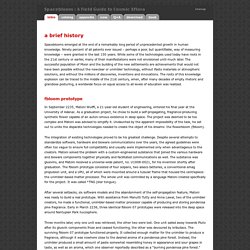 Ninety percent of all patents ever issued – perhaps a poor, but quantifiable, way of measuring knowledge – were granted in the last 150 years. While some of the technologies used today have roots in the 21st century or earlier, many of their manifestations were not envisioned until much later. Untitled. Scientists Think Cavemen Painted While High on Hallucinogenic Drugs. (what is this?): Blood and Sawdust. In contrast with today's vogueish marketing gestures of reuse, recycling and boutique "upcycling", 19th century society appears to have understood reclamation as a stage of production. 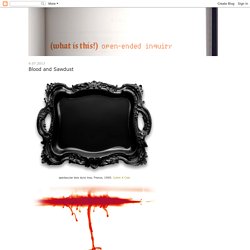 According to Susan Strasser, Richards Professor of American History at the University of Delaware and author of Waste and Want: A Social History of Trash, “The 19th century world regarded reusing materials as a matter of common sense, of stewardship of material goods.” Neanderthals Built Mysterious Stone Circles. Once illuminated by the flickering fires of prehistoric builders, an array of mysterious stone circles hid in darkness for millennia, tucked into the recesses of a cave in France. 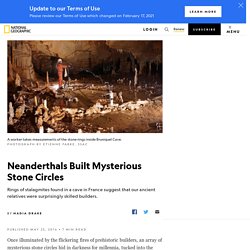 Now, these ancient structures are again emerging from the shadows. The strange rings are crafted from stalagmites and are roughly 176,000 years old, scientists report today in Nature. And if the rings were built by a bipedal species, as archaeologists suspect, then they could only be the work of Neanderthals, ancient human relatives that are proving to be much more “human” than anticipated. “This discovery provides clear evidence that Neanderthals had fully human capabilities in the planning and the construction of ‘stone’ structures, and that some of them penetrated deep into caves, where artificial lighting would have been essential,” says paleoanthropologist Chris Stringer of the Natural History Museum in London. 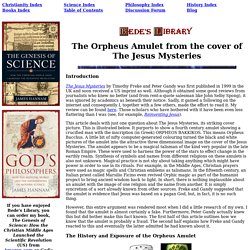 Sentimental Cartography. Cracking the Code of James Hampton's Private Language. After the sun went down and the streetlights woke up, God visited James Hampton. 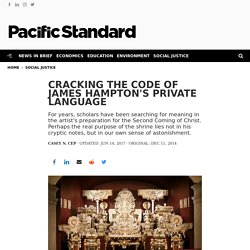 Not just once, but often. Moses appeared to him in 1931, the Virgin Mary in 1946, and then Adam on the day of Truman’s inauguration in 1949. These holy visitations came for years in the late hours of the night, when Hampton had finished his shift at the General Services Administration. Born in 1909 in the Midlands of South Carolina, Hampton served in the Pacific during the Second World War, and then worked as a janitor in the nation’s capital until he died. Most nights, instead of going home to his room at a boarding house, Hampton went to a brick garage that he rented for 50 dollars a month. Harry Lowe, then assistant director of the Smithsonian American Art Museum, told the Washington Post that walking into the garage "was like opening Tut’s tomb. " Leonora Carrington. Painting is a need, not a choice [1], said the legendary painter and novelist Leonora Carrington, who managed to completely redefine female symbolism through her own interpretation of surrealism. 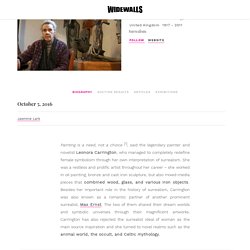 She was a restless and prolific artist throughout her career – she worked in oil painting, bronze and cast iron sculpture, but also mixed-media pieces that combined wood, glass, and various iron objects. Talchum. Talchum (탈춤) or t'alch'um could be characterized as a Korean dance performed while wearing a mask, mimicry, miming, speaking and even sometimes singing. 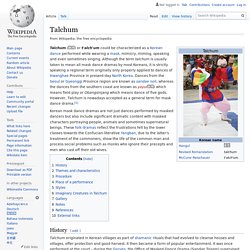 Although the term talchum is usually taken to mean all mask dance dramas by most Koreans, it is strictly speaking a regional term originally only properly applied to dances of Hwanghae Province in present-day North Korea. Dances from the Seoul or Gyeonggi Province region are known as sandae noli, whereas the dances from the southern coast are known as yayu(야유) which means field play or Obangsinjang which means dance of five gods. However, Talchum is nowadays accepted as a general term for mask dance drama.[1] Korean mask dance dramas are not just dances performed by masked dancers but also include significant dramatic content with masked characters portraying people, animals and sometimes supernatural beings.

History[edit] Themes and characteristics[edit] Procedure[edit] Mask dance is largely divided into seven parts. Styles[edit] 'Sistine Chapel Of The Ancients' Rock Art Found Deep In Amazon Jungle. Ella Al-ShamahiThe discovery will be aired as part of a documentary series in December. 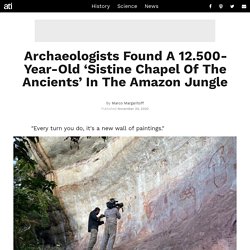 Archaeologists have discovered tens of thousands of ancient paintings dating back some 12,500 years in the Colombian jungle. These prehistoric depictions of animals and humans were found adorning cliff faces that stretch across nearly eight miles. On top of that, some depict long-extinct ice age animals. Les reliquaires du diaphane, 2016 - Laurent Millet. Published in the editorial work on polyhedrons by the 16th century famous goldsmith of Nuremberg Wenzel Jamnitzer, these erudite and complex shapes are pedestals that the author shows to present mathematical objects like sculptures. 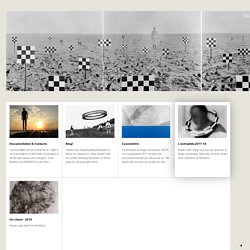 These pedestals partly resume the formal vocabulary of mathematical objects and partly the ornemental spirit of the manerist shapes. Helvetesskåpet - specialeffekter från år 1800. Survey of Alternative Displays. Stone Age cave art: the world's first animation. Cave art that had been created in the Paleolithic age is thought to be the world's first attempt at producing a moving picture, not a muddled mess of limbs and heads. 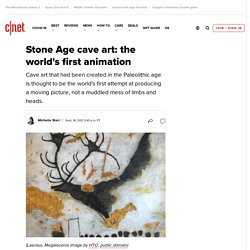 In cave paintings across France, animals appear to have multiple limbs, heads and tails — but, according to archaeologist Marc Azéma of the University of Toulouse–Le Mirail, who has spent over 20 years studying the phenomenon, the paintings are actually primitive animations. When viewed under the unsteady light of flickering flames, the images can appear to move. The ingenuity of our Stone Age ancestors isn't limited to cave walls, either. Although the thaumatrope (a disc or card with a different image on each side that is threaded on a string and is then spun to blur the images into one) wasn't technically invented until 1824, French artist Florent Rivère found that Paleolithic people used similar objects. Check out the video below to see how the cave paintings would have appeared animated.

Original Paintings. MetaTalktail Hour: Box art, take me away. Did you ever feel transported by an image? Some things (games, books, music albums, ...toys, cereals, ...) have cover art that can draw you into its world with a single image, even if the product then didn't really live up. Or short video (like tv ads, music videos, opening credits) that create an outsized atmosphere in a just a limited time.

The Mesmerizing Geometry of Malaysia's Most Complex Cakes. Hockney–Falco thesis. Encyclopedia of Rainbows Book Captures Rainbows in Nature. 1) A stranger than fiction Roman ring mystery thread: this enigmatic Roman gold ring was found in a ploughed field near Silchester in 1785. The square bezel has a portrait of the pagan goddess Venus, inscribed backwards SUNEV for use as a signet ring by t. Blazonry Server. Strange object found on my grandpa’s bookshelf pushed behind some books : nonmurdermysteries.

Why the Mystery of the Met’s Unicorn Tapestries Remains Unsolved. A Roman 'ribbon glass cup', probably made Italy in about 25 BC-50 AD. Who is Tuma'el. File:Egyptian - Vase in the Shape of a Duck - Walters 48421 - Profile.jpg. A safe fairyland - About your griffin post, about it being... Supernova Condensate. Dorodango, the Japanese art of making mud balls - Laurence King Blog. Webexhibits. Motionographer And Now for Something Soothing… “As Above” by Roman Hill. Young Decadent - Tania Brassesco & Lazlo Passi Norberto - Expectations 2010 - Opera Celeste Network.

In which the Gallo-Roman Dodecahedra are used for knitting : badhistory. "Victorian Mourning Dolls"- Where's The Evidence? : badhistory. The Myth of Whiteness in Classical Sculpture.