Something to read in quarantine essays 2018 to 2020 v3. Internet Encyclopedia of Philosophy. The Chinese term wuxing (wu-hsing, “five processes” or “five phases”) refers to a fivefold conceptual scheme that is found throughout traditional Chinese thought. 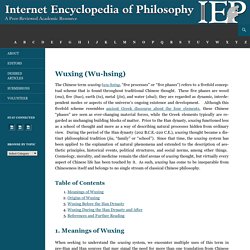 These five phases are wood (mu), fire (huo), earth (tu), metal (jin), and water (shui); they are regarded as dynamic, interdependent modes or aspects of the universe’s ongoing existence and development. Although this fivefold scheme resembles ancient Greek discourse about the four elements, these Chinese “phases” are seen as ever-changing material forces, while the Greek elements typically are regarded as unchanging building blocks of matter. Essays on Reducing Suffering.

The Missing "Luckiness" Coefficient in Self-Sampling Arguments - Nothing to see here. Some Bertrand Russell quotes with illustrations by Australian humourist Bradley Trevor Greivere. Mereological nihilism. Explanation[edit] Our everyday perceptual experience suggests that we are surrounded by macrophysical objects that have other, smaller objects as their proper parts. 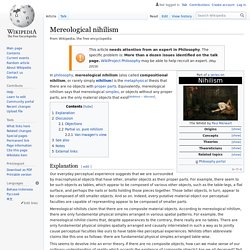 Mereological nihilists claim that there are no composite material objects. This seems to devolve into an error theory. Discussion[edit] Rati. TURFAA 3v2. How Well Do Facts Travel? ‘This fascinating interdisciplinary collection arising from an extraordinary international collaboration is a significant and innovative contribution to a crucial question in science and technology studies: what do we mean by a ‘fact’? 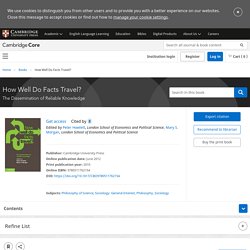 New light is thrown on this old question by a fresh focus on the transmission and transformation of facts between different contexts, with very welcome attention to neglected subject areas, too. It is an intellectual feast of a volume, with plenty of food for thought for historians, philosophers, and natural and social scientists, especially those who are uncomfortable sitting in conventional disciplinary pigeonholes.’ Hasok Chang - University of Cambridge ‘This is a lively and diverse collection of essays about the lives of facts: ‘shared pieces of knowledge that hold the qualities of being autonomous, short, specific and reliable.’ James Griesemer - University of California, Davis ‘How Well Do Facts Travel? Randall Mason - University of Pennsylvania. Polanyi’s paradox. Professor Michael Polanyi on a hike in England Polanyi’s paradox, named in honour of the British-Hungarian philosopher Michael Polanyi, is the theory that human knowledge of how the world functions and capability are, to a large extent, beyond our explicit understanding. 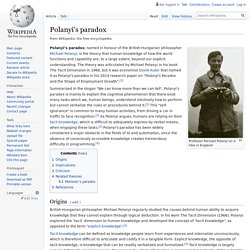 The theory was articulated by Michael Polanyi in his book The Tacit Dimension in 1966, but it was economist David Autor that named it as Polanyi’s paradox in his 2014 research paper on “Polanyi’s Paradox and the Shape of Employment Growth”.[1] Origins[edit] British-Hungarian philosopher Michael Polanyi regularly studied the causes behind human ability to acquire knowledge that they cannot explain through logical deduction. In his work The Tacit Dimension (1966), Polanyi explored the 'tacit' dimension to human knowledge and developed the concept of "tacit knowledge", as opposed to the term "explicit knowledge".[2] Implications[edit] Criticism[edit] Lee Sedol (B) vs AlphaGo (W) - Game 1 Related theories[edit] References[edit]

Debunking Fallacies in the Theory of AI Motivation - LessWrong 2.0. ... or The Maverick Nanny with a Dopamine Drip Richard Loosemore Abstract My goal in this essay is to analyze some widely discussed scenarios that predict dire and almost unavoidable negative behavior from future artificial general intelligences, even if they are programmed to be friendly to humans. 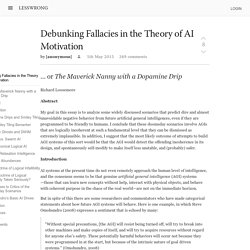 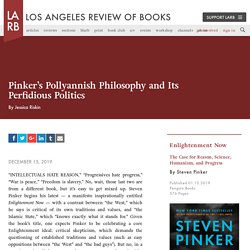 No, wait, those last two are from a different book, but it’s easy to get mixed up. Steven Pinker begins his latest — a manifesto inspirationally entitled Enlightenment Now — with a contrast between “the West,” which he says is critical of its own traditions and values, and “the Islamic State,” which “knows exactly what it stands for.” Given the book’s title, one expects Pinker to be celebrating a core Enlightenment ideal: critical skepticism, which demands the questioning of established traditions and values (such as easy oppositions between “the West” and “the bad guys”). But no, in a surprise twist, Pinker apparently wants us over here in “the West” to adopt an Islamic State–level commitment to our “values,” which he then equates with “classical liberalism” [1] (about which more presently). 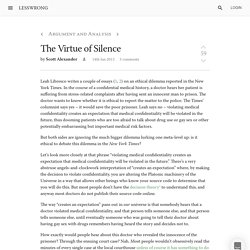 In the course of a confidential medical history, a doctor hears her patient is suffering from stress-related complaints after having sent an innocent man to prison. The doctor wants to know whether it is ethical to report the matter to the police. The Times’ columnist says yes – it would save the poor prisoner. Leah says no – violating medical confidentiality creates an expectation that medical confidentiality will be violated in the future, thus dooming patients who are too afraid to talk about drug use or gay sex or other potentially embarrassing but important medical risk factors. The phenomenology of solitude. Throughout the history of philosophy there has been a tension between the valuable introspection afforded by solitude and the intrinsic need to understand ourselves in relation to others. 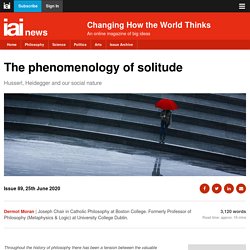 In the phenomenological tradition of Edmund Husserl and Martin Heidegger we find a vivid picture of man as a being meditatively alone but fundamentally social. It is often thought that philosophers favor living alone, in isolation, devoting themselves to quiet contemplation. SINPG.1. Motte-and-bailey fallacy. Type of informal fallacy The motte-and-bailey fallacy (named after the motte-and-bailey castle) is a form of argument and an informal fallacy where an arguer conflates two positions which share similarities, one modest and easy to defend (the "motte") and one much more controversial (the "bailey").[1] The arguer advances the controversial position, but when challenged, they insist that they are only advancing the more modest position.[2][3] Upon retreating to the motte, the arguer can claim that the bailey has not been refuted (because the critic refused to attack the motte)[1] or that the critic is unreasonable (by equating an attack on the bailey with an attack on the motte).[4] History[edit] Nicholas Shackel has described the reference to medieval castle defense like this:[2] The concept was popularized on the blog Slate Star Codex.[4] Examples[edit] An example given by Shackel is the statement "morality is socially constructed". 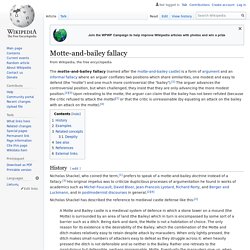 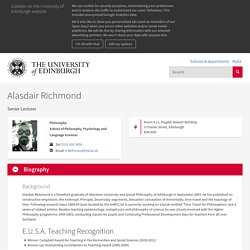 He has published on constructive empiricism, the Anthropic Principle, Doomsday arguments, Descartes' conception of immortality, time travel and the topology of time. Following research leave 2008-09 (part-funded by the AHRC), he is currently working on a book entitled 'Time Travel for Philosophers' and a series of related articles. Besides teaching epistemology, metaphysics and philosophy of science, he was closely involved with the Higher Philosophy programme 1999-2003, conducting classes for pupils and Continuing Professional Development days for teachers from all over Scotland.

E.U.S.A. Winner: Campbell Award for Teaching in the Humanities and Social Sciences (2010-2011) Runner-up: Outstanding Contribution to Teaching Award (2008-2009). Publications Book Berkeley's "Principles of Human Knowledge": A Reader's Guide, (Continuum, hardcover and paperback, 2009): "p-suicide" is a particular mental action a conscious being can take which will turn them into a p-zombie. One such pz described it as blowing out the candle behind her eyes. Given this is a thing people can do, how many people in your immediate circle do.

Theory Aside (eBook, 2014) John Rawls and the Original Position. If the conscious self is an illusion – who is it that's being fooled?