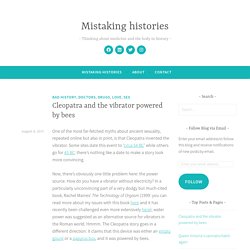 Some sites date this event to ‘circa 54 BC’ while others go for 45 BC: there’s nothing like a date to make a story look more convincing. Now, there’s obviously one little problem here: the power source. How do you have a vibrator without electricity? In a particularly unconvincing part of a very dodgy but much-cited book, Rachel Maines’ The Technology of Orgasm (1999: you can read more about my issues with this book here and it has recently been challenged even more extensively here), water power was suggested as an alternative source for vibrators in the Roman world. Hmmm. Even those repeating this myth seem to find it dubious, using words like ‘reportedly’ or commenting ‘There is no physical evidence of this sweet sex toy, but Cleopatra was known as a sex fiend.’ 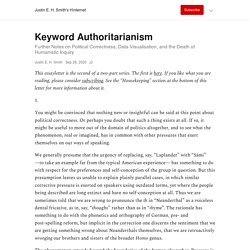 The first is here. If you like what you are reading, please consider subscribing. See the “Housekeeping” section at the bottom of this letter for more information about it. You might be convinced that nothing new or insightful can be said at this point about political correctness. Or perhaps you doubt that such a thing exists at all. Divers oil the myth. Posted by ~eJ on December 12, 2006 at 21:08:36: In Reply to: oil? 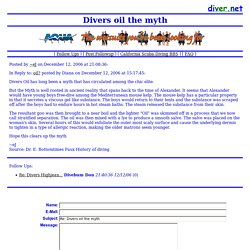 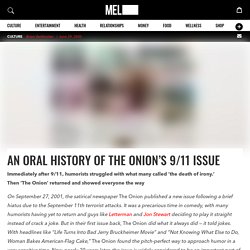 It was a precarious time in comedy, with many humorists having yet to return and guys like Letterman and Jon Stewart deciding to play it straight instead of crack a joke. But in their first issue back, The Onion did what it always did — it told jokes. With headlines like “Life Turns Into Bad Jerry Bruckheimer Movie” and “Not Knowing What Else to Do, Woman Bakes American-Flag Cake,” The Onion found the pitch-perfect way to approach humor in a very sensitive time. Now, nearly 20 years later, the issue is widely considered to be an important part of comedy history — even an important part of the broader cultural history surrounding 9/11. While The Onion’s headquarters back in 2001 may have been in downtown Manhattan, to get the proper context for their landmark issue, the story doesn’t begin in New York. No Books without Cheese.

The tweeter known as Incunabula has an enjoyable thread on the history of books: . 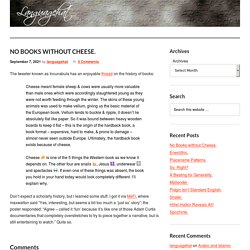 If even one of these things was absent, the book you hold in your hand today would look completely different. I’ll explain why. Don’t expect a scholarly history, but I learned some stuff. I got it via MeFi, where maxwelton said “Yes, interesting, but seems a bit too much a ‘just so’ story”; the poster responded: “Agree – called it ‘fun’ because it’s like one of those Adam Curtis documentaries that completely overstretches to try to piece together a narrative, but is still entertaining to watch.”

James Franklin: The Renaissance Myth. James Franklin ( Quadrant 26 (11) (Nov. 1982), 51-60) THE HISTORY OF IDEAS is full of more tall stories than most other departments of history. 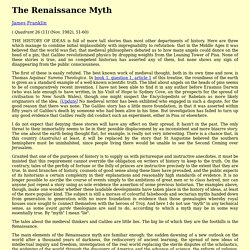 Here are three which manage to combine initial implausibility with impregnability to refutation: that in the Middle Ages it was believed that the world was flat; that medieval philosophers debated as to how many angels could dance on the head of a pin; that Galileo revolutionised physics by dropping weights from the Leaning Tower of Pisa. None of these stories is true, and no competent historian has asserted any of them, but none shows any sign of disappearing from the public consciousness. The first of these is easily refuted. The best known work of medieval thought, both in its own time and now, is Thomas Aquinas' Summa Theologica.

Abandoned Footnotes: The Sun was once New. Here's a bit of interesting speculation I'd never heard before, from Peter Watson's "The Great Divide: History and Human Nature in the Old World and the New". 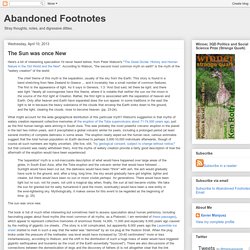 According to Watson, "the second most common myth on earth" is the myth of the "watery creation" of the world: The chief theme of this myth is the separation, usually of the sky from the Earth. This story is found in a band stretching from New Zealand to Greece ... and it invariably has a small number of common features. The first is the appearance of light. As it says in Genesis, 1:3: 'And God said, let there be light: and there was light.' Rolling Stone : THE LOW POST: The Hopeless Stupidity of 9/11 Conspiracies. URL: >>Talk back to Taibbi -- and see a complete archive of The Low Post. 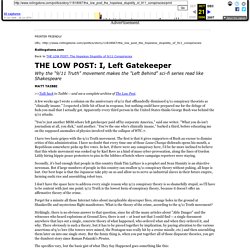 A few weeks ago I wrote a column on the anniversary of 9/11 that offhandedly dismissed 9/11 conspiracy theorists as "clinically insane. " I expected a little bit of heat in response, but nothing could have prepared me for the deluge of fuck-you mail that I actually got. Apparently every third person in the United States thinks George Bush was behind the 9/11 attacks. "You're just another MSM-whore left gatekeeper paid off by corporate America," said one writer. I have two basic gripes with the 9/11 Truth movement. Secondly, it's bad enough that people in this country think Tim LaHaye is a prophet and Sean Hannity is an objective newsman. I don't have the space here to address every single reason why 9/11 conspiracy theory is so shamefully stupid, so I'll have to be content with just one point: 9/11 Truth is the lowest form of conspiracy theory, because it doesn't offer an affirmative theory of the crime.

Meet a Historian: Robin S. Reich on Making Sense of Medieval Medicine: Humors, Weird Animal Parts, and Experiential Knowledge – A Collection of Unmitigated Pedantry. Note from the Editor: I’m excited that I have our first (hopefully of many!) 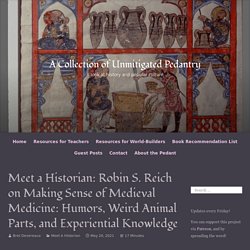 Guest post to share with you and it is a fascinating topic to start with. The history of medicine (and the history of science more generally) is a captivating and important sub-field and a frequent reader-request, but also a place where non-specialists fear to tread because of the formidable demands in languages and expertise. So I am thrilled for Robin S. When I tell people I study medieval medicine, their first reaction is usually something along the lines of “they had medicine in the Middle Ages?” It’s hard to approach medieval medicine because it is so different from what we now practice and trust as medicine, and because as a result we have a huge body of pop culture telling us that medieval medicine was utter nonsense. 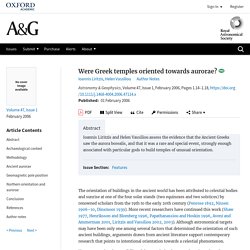 Ioannis Liritzis, Dinosaur Duplicity – how Adrienne Mayor misrepresents at least 80 million years of Central Asian history. : badhistory. Sahara Sea. PartyMoses comments on What would the physique of a medieval knight have been? Would they have been more muscular, and closer in body type of an athlete today? Or would they be like an average weight lifter in today's world? Cool pyramid sound: Sound on. All Things Linguistic. Unknought - tanadrin: carovingian: tanadrin: I was... Language Log » Headless men with face on chest. « previous post | next post » The hapless condition of headlessness may be a physical phenomenon, but it may also be a grammatical or orthographic category in linguistics, and we have dealt with both kinds on Language Log, e.g.: Now, what shall we make of the following? Xingtian as drawn by Jiang Yinghao, 17th century; there are many different versions of this figure, but all basically with the same features and pose.

Tartaria: The Supposed Mega-Empire of Inner Eurasia : badhistory. Proposal-keep-the-nuclear-lau. In 1981, Harvard law professor Roger Fisher, director of the Harvard Negotiation Project, published a thought experiment in the Bulletin of Atomic Scientists: what if the codes to launch nuclear war were kept inside the chest-cavity of a young volunteer, and the President would have to hack them out of this young man's chest before he could commence armageddon? There is a young man, probably a Navy officer, who accompanies the President. This young man has a black attaché case which contains the codes that are needed to fire nuclear weapons.

I could see the President at a staff meeting considering nuclear war as an abstract question. Vestiarium Scoticum. The book itself is purported to be a reproduction, with colour illustrations, of a 15th-century manuscript on the clan tartans of Scottish families. Shortly after its publication it was denounced as a forgery, and the "Stuart" brothers who brought it forth were also denounced as impostors for claiming to be the grandsons of Bonnie Prince Charlie.

It is generally accepted today that neither the brothers themselves nor the Vestiarium are what they were purported to be.[1] Nevertheless, the role of the book in the history of Scottish tartans is immense, with many of the designs and patterns contained therein passing into the realm of "official" clan tartans. Background[edit] Enigmatic Questions of Tiberius. Ænigmates Tiberii Other Puzzling Questions Additional Notes Information on this site is extracted from the the book, On the Roman Religion, 344 pages, with extensive notes and a translation of Book One of Cicero's De Divinatione by Horace W. LaBadie, Jr., available as a .PDF file (Adobe's Portable Document Format) from FatBrain.com. Follow the link and buy the book. Buy On the Roman Religion, from FatBrain.com WWW Search Engines - use Excite, Lycos, WebCrawler, MetaCrawler, Argos, and other Internet databases to find more information on Tiberius, Roman History, Greek and Roman Mythology, and other subjects.

Notes © Copyright 1996, 1997, 1998, 1999 by Horace W. The Vinland Map Rediscovered: New Research on the Forgery and its Historical Context LIVESTREAM. This is the letter to @NewYorker that I sent in response to a recent article about the Black Death, and the numerous errors contained therein. Error - Cookies Turned Off. Copernicus and the "High Seas" (iii) - Sacred Space Astronomy. My posts from last week and the previous week were both about Copernicus and how he rejected the Two Spheres Theory (TST) regarding the shape of our world—that body we now call Planet Earth. Untitled. A visit to the underworld: the unsolved mystery of the tunnels at Baia. Baia and the Bay of Naples, painted by J.M.W. Uncovering Secrets of the Sphinx. Reply of the Zaporozhian Cossacks. Reply of the Zaporozhian Cossacks to Sultan Mehmed IV of the Ottoman Empire, also known as Cossacks of Saporog Are Drafting a Manifesto (Russian: Запорожцы пишут письмо турецкому султану), is a painting by Russian[1] artist Ilya Repin.

The 2.03 m (6 foot 7 inch) by 3.58 m (11 foot 9 inch) canvas was started in 1880 and finished in 1891. 19th-century fans were totally into a Napoleon/Alexander romance. Tumblr is getting a history lesson thanks to a sexy romp through time with two world rulers who were inordinately fond of one another. “if u ever get disheartened just remember people in the 19th Century were painting hot Napoleon/Tsar Alexander boyfriend yowz before our great-grandparents were even conceived,” wrote Tumblr user scroogerello Wednesday.

Plebeian scum! a review of "Caligula: Divine Carnage" Plebeian Scum! Long-time nuclear waste warning messages. Morris Kominsky’s "The Hoaxers" Hammered Out Bits: 'Quenched in the body of a Slave...' Modified from a recent posting to Norsefolk. The original conversation had started with a 'traditional' reference to using blood as a hardening medium for Bronze. I had pointed out that all the non ferrous alloys are in fact annealed (softened) through quenching. Res Obscura: The Most Wonderful Map in the World: Urbano Monte's Planisphere of 1587. At some point in 1589, a Milanese cartographer named Urbano Monte made up his mind: his self-portrait needed updating.