Puzzle Page Answers - PuzzlePageAnswers.Org. The Crossword Library: 11 Authors You Should Know. Scholars view Sholem ASCH as one of the most widespread Yiddish-language writers of the 20th century. 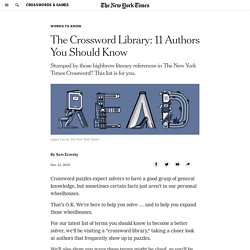 His writing focused on subjects from European Jewish culture (“Sanctification of the Name,” “Mottke the Thief”) to connecting Judaism closely with Christianity (“Moses,” “The Nazarene”). Born in Poland, ASCH became a naturalized United States citizen in 1920 after the early success of his works abroad. List of U.S. states by traditional abbreviation. Rex Parker Does the NYT Crossword Puzzle. Daily Crossword Column. The Further Adventures of Jim Horne. The Greek Alphabet. Had a web page that lists greek pronunciation. 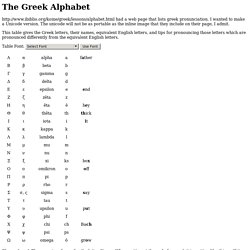 I wanted to make a Unicode version. The unicode will not be as portable as the inline image that they include on their page, I admit. This table gives the Greek letters, their names, equivalent English letters, and tips for pronouncing those letters which are pronounced differently from the equivalent English letters. Sigma (σ, ς):There are two forms for the letter Sigma. When written at the end of a word, it is written like this: ς. Upsilon (υ):In the above table, we suggest that you pronounce this letter like "u" in "put". Xi (χ): This is the same sound as "ch" in "Bach", which does not sound like "ch" in "chair". Footnote 1: Other pronunciation schemes To be fair, we should mention that there are several different ways to pronounce Greek. Erasmian pronunciation. Latin alphabet. Alphabet used to write the Latin language The Latin or Roman alphabet is the set of letters originally used by the ancient Romans to write Latin. 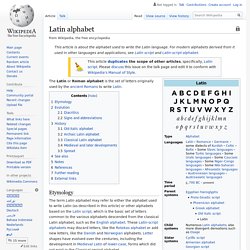 Etymology Evolution Due to its use in writing Germanic, Romance and other languages first in Europe and then in other parts of the world and due to its use in Romanizing writing of other languages, it has become widespread (see Latin script). It is also used officially in Asian countries such as China (separate from its ideographic writing), Malaysia, Indonesia, and Vietnam, and has been adopted by Baltic and some Slavic states. List of gods and goddesses. CRUCIVERB.COM - Crossword Constructors Community Center. The Crossword Answers You Must Absolutely, Positively, Know. "Automatically, the seasoned solver gravitates torepeater clues to gain entry into the grid. 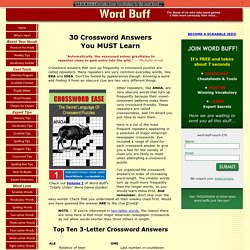 " — Michelle Arnot Crossword answers that turn up frequently in crossword puzzles are called repeaters. Many repeaters are very common everyday words, like ERA and IDEA. Don't be fooled by appearances though. Knowing a word and finding it from an obscure clue are two very different things. Check out Volume 1 of Word Buff's 'Totally Unfair' Word Game Guides! Other repeaters, like ANOA, are very obscure words that turn up frequently because their vowel-consonant patterns make them very crossword-friendly.

XWord Info: New York Times Crossword Answers and Insights. 10 Sports Names That Will Help You Become a Better Crossword Solver. The soccer legend Pelé, thought by many to be the greatest player of all time, has been in The New York Times Crossword 176 times Edson Arantes do Nascimento was born in Três Corações, Brazil, in 1940 and scored the first professional goal of his career before he turned 16. 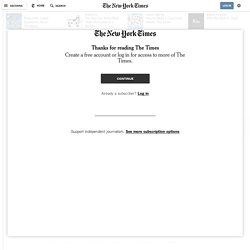 Pelé, who earned his nickname as a child, was signed to a professional league when he was 15 years old. Pelé was officially introduced to the world during the 1958 World Cup in Sweden. The 17-year-old amazed the crowd with his speed, athleticism and field vision to score three goals in a semifinal against France. During his career, he went on to play for Brazil and win two additional World Cups. How I mastered the Saturday NYT crossword puzzle in 31 days. For the past four days, I’ve been using my “Crossword Trainer” to memorize previous crossword clues and answers. 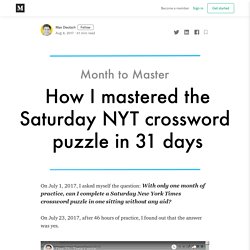 As of today, I’ve memorized 3,200 out of the 12,707 clue-answer pairs. This has been a lot of work (eight hours, so far), so I should probably try to quantify what I’m gaining by completing this portion of my training. How to Get Started Solving The New York Times Crossword Puzzle. 1. 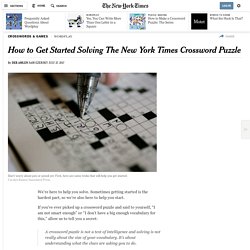 Start With the Monday Puzzles tl;dr: Mondays are the easiest and they get harder as the week goes on. This is probably a beginning solver’s most common mistake. You know what it’s like: You have some downtime on a Saturday and you look around for something to pass the time. Your officemate keeps bragging about his ability to finish The New York Times Crossword. So, not to be outdone, you pick up the paper or download our app and turn to the Saturday puzzle.

Fun Fact: The Saturday crossword is actually the hardest puzzle of the week. Just to drive the point home, let’s take a look at the difference between a Monday clue and a late-week clue for a popular crossword entry. “Nabisco cookie”“Cookie with creme filling”“‘Twist, Lick, Dunk’ cookie” And here are some late-week clues, which might require more specialized knowledge about these delicious treats: “Snack since 1912”“It has 12 flowers on each side”“Sandwich often given a twist” We weren’t kidding you. 1. How To Solve The New York Times Crossword - Crossword Guides.