Stuff - Jackdaws love my big sphinx of quartz. Today I learned that some people hear voices because the stars are beaming invisible energy into their pineal glands. 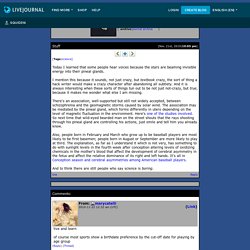 I mention this because it sounds, not just crazy, but textbook crazy, the sort of thing a hack writer would make a crazy character after abandoning all subtlety. And it is always interesting when these sorts of things tun out to be not just not-crazy, but true, because it makes me wonder what else I am missing. The View from Hell: Trying to See Through: A Unified Theory of Nerddom. There is a single characteristic, I argue, that defines and unites the cognitive community that you and I share if you are reading this (the community of nerds). 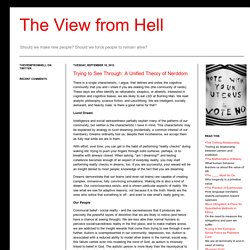 These days we often identify as rationalists, skeptics, or atheists, interested in cognition and cognitive biases; we are likely to eat LSD at Burning Man. We read analytic philosophy, science fiction, and LessWrong. Xenopsychology. © 1984 Robert A. 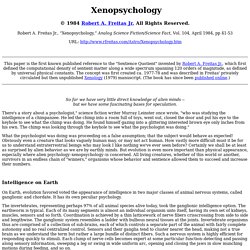 Freitas Jr. All Rights Reserved. Robert A. Freitas Jr., “Xenopsychology,” Analog Science Fiction/Science Fact, Vol. 104, April 1984, pp 41-53. Measuring the visual angle of the mind's eye. Is Psychoanalysis Still Relevant to Psychiatry? How many otherkin are actually out there, and what's that about? : AskAnthropology. The Synesthetic World Of Childhood – qwerky science. It appears that synesthesia is the basis of our experience of the world, though to different degrees in different individuals. 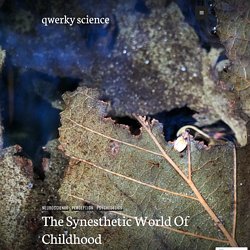 People with synesthesia experience an overlap of the senses, where something like sound can bring up representations of some object or color. As an example, the letter ‘A’ may conjure up the color red. Research Ideas - Alexey Guzey. Created: 2018-10-13; modified: 2019-12-05 This is a list of the research I would do / fund if I had more time / money. 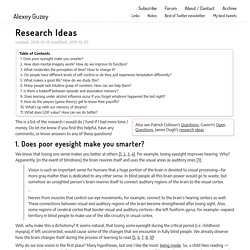 Do let me know if you find this helpful, have any comments, or know answers to any of these questions! Does poor eyesight make you smarter? We know that losing one sense makes you better at others [1, 2, 3, 4]. "Adversarial images for the primate brain" (!) 1. Train a model to predict responses of face-selective neurons 2. Modify images to fool that model 3. Test actual behavioral &amp; neural responses to those images Voila: Macaques (and humans) are fooled! There’s a creepy guy on the other end at Google!: engaging middle school students in a drawing activity to elicit their mental models of Google.

Rubber duck debugging [evidence that reasoning is inherently adversarial?] : gwern. Second Sleep History: A Tale of Medieval Insomniacs. Hey all, Ernie here with a piece from Fahad Sperinck, who is making his second appearance in the newsletter after writing a great piece on death metal and normalcy. 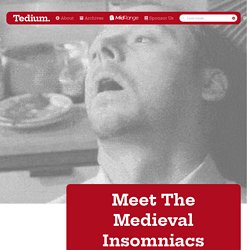 Check out his latest below: Today in Tedium: The days are darkening, the mercury dropping, and the pumpkins a-glowing; this weekend, the small hand goes back an hour. Most of us will devour that precious extra hour of sleep like a bear falling on a baby seal. (Okay, sure, there’s something else happening within the next week that might keep you up at night—but enough existential anxiety.) The chimpanzee who sees sounds : Nature News & Comment. 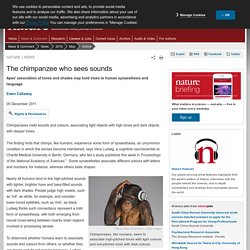 The finding hints that chimps, like humans, experience some form of synaesthesia, an uncommon condition in which the senses become intertwined, says Vera Ludwig, a cognitive neuroscientist at Charité Medical University in Berlin, Germany, who led a study published this week in Proceedings of the National Academy of Sciences1. Some synaesthetes associate different colours with letters and numbers, for instance, whereas others taste shapes. Gravity Giant Productions / Getty Images Chimpanzees, like humans, seem to associate high-pitched tones with light colours and low-pitched ones with dark colours. Nearly all humans tend to link high-pitched sounds with lighter, brighter hues and bass-filled sounds with dark shades.

When high tones accompanied white squares and low tones were matched with black, the animals picked the correct colour 93% of the time, on average. The brain... What Is the Memory Capacity of the Human Brain? Can an old head injury suddenly cause detrimental effects much later in life? 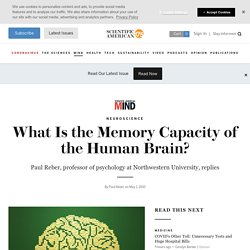 —Anonymous, via e-mail Douglas Smith, professor of neurosurgery and director of the Center for Brain Injury and Repair at the University of Pennsylvania, answers: ALTHOUGH A BRAIN INJURY from a car accident or a collision during a football game often seems to cause a sudden change to cognitive ability years later, this change does not just appear out of the blue—the damage has been building up slowly, unnoticed, over time.

Postinjury, the progressive brain deterioration that may occur likely reaches a tipping point, after which the loss of function “suddenly” becomes obvious. Depending on the type and severity of the traumatic brain injury (TBI), it can accelerate memory loss or increase a person’s chance of succumbing to Alzheimer’s disease. TBI commonly damages nerve fibers in the brain called axons. What is the memory capacity of the human brain? "MR. The human brain consists of about one billion neurons. Book Review: The Secret Of Our Success. [Previously in sequence: Epistemic Learned Helplessness] “Culture is the secret of humanity’s success” sounds like the most vapid possible thesis. 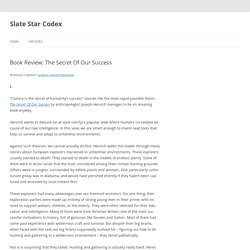 The Secret Of Our Success by anthropologist Joseph Henrich manages to be an amazing book anyway. Henrich wants to debunk (or at least clarify) a popular view where humans succeeded because of our raw intelligence. In this view, we are smart enough to invent neat tools that help us survive and adapt to unfamiliar environments. Against such theories: we cannot actually do this. Bad Dreams. [Content warning: Scary stuff, gawking at weird diseases] 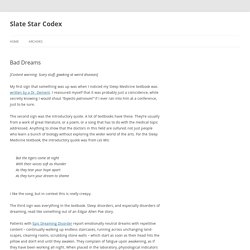 First, that it purports to explains the origin of consciousness. And second, that it posits a breakdown of the bicameral mind. I think it’s possible to route around these flaws while keeping the thesis otherwise intact. List of Fictional Drugs Banned By The FDA. PROTOZOSIN: PROFILE: Alpha blocker notably effective against Pre-Traumatic Stress Disorder BANNED BECAUSE: Banned on request of DARPA, who are trying to use epidemiology of Pre-Traumatic Stress Disorder to predict the course of future conflicts.

Lobbying to overturn ban by “Future Veterans of the Pakistani War” thus far ineffective. GEONEXPERINE: PROFILE: A highly effective painkiller with a half-life of about twenty-four hours. Notable for its quick compensatory upregulation of pain receptors and strong rebound effect: after its effect wears off, pain typically returns twice as bad as before. Limerence. What Universal Human Experiences Are You Missing Without Realizing It? Remember Galton’s experiments on visual imagination?

Some people just don’t have it. And they never figured it out. Don’t be so sure you know what a lowercase G looks like. Argumate.tumblr. The Worst Treatment Autism Got In 2015 Was From Malcolm Gladwell. The COVID-19 Pandemic Is Changing Our Dreams. What is a plural person? Sources of Flexibility in Human Cognition: Dual-Task Studies of Space and Language. NPR Choice page. McCollough effect. The effect was discovered by American psychologist Celeste McCollough in 1965.[1] Producing the effect[edit] Properties of the effect[edit]

Oxford Compendium of Visual Illusions - Oxford Scholarship. Abstract Visual illusions cut across academic divides and popular interests: on the one hand, illusions provide entertainment as curious tricks of the eye; on the other hand, scientific research related to illusory phenomena has given generations of scientists and artists deep insights into the brain and principles of mind and consciousness. Cogsci // cognitive science and more. Index (Front Page) : Erowid Experience Vaults. The extreme male brain revisited: gender coherence in adults with autism spectrum disorder. Crossref Citations. Emoji fans take heart: Scientists pinpoint 27 states of emotion. The Emoji Movie, in which the protagonist can’t help but express a wide variety of emotions instead of the one assigned to him, may have gotten something right.

A new UC Berkeley study challenges a long-held assumption in psychology that most human emotions fall within the universal categories of happiness, sadness, anger, surprise, fear and disgust. To view hundreds of video clips, click on image above to get to the interactive map and move cursor over the map’s colored letters. How do people with synesthesia experience partial matches or changes? While I realize that there are lots of different types of synesthesia, a common example is seeing numbers as being specific colors.