The raven and the whale : the war of words and wits in the era of Poe and Melville : Miller, Perry, 1905-1963 : Free Download, Borrow, and Streaming. H. Bustos Domecq. We ask you, humbly: don't scroll away. 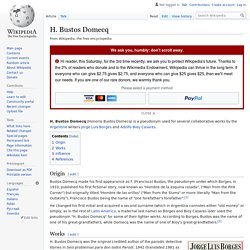 Hi reader, this Saturday, for the 3rd time recently, we ask you to protect Wikipedia's future. Thanks to the 2% of readers who donate and to the Wikimedia Endowment, Wikipedia can thrive in the long term. If everyone who can give gives , and everyone who can give gives , then we'll meet our needs. If you are one of our rare donors, we warmly thank you. Thank you! H. Origin[edit] Bustos Domecq made his first appearance as F. He changed his first initial and acquired a second surname (which in Argentina connotes either "old money" or simply, as in the rest of Latin America, a maternal last name) as Borges and Bioy Casares later used the pseudonym "H. Works[edit] H. Bustos was also the alleged author of Crónicas de Bustos Domecq, 1967, (translated by Norman Thomas Di Giovanni as Chronicles of Bustos Domecq (1976)), and Nuevos Cuentos de Bustos Domecq (1977), even though the authors' actual names were featured on the covers of both books. 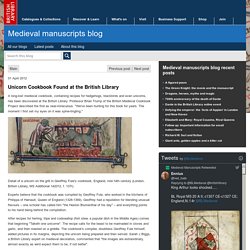 Professor Brian Trump of the British Medieval Cookbook Project described the find as near-miraculous. "We've been hunting for this book for years. The moment I first set my eyes on it was spine-tingling. " You Call That Poetry?! by Ian Daly. On a cool autumn evening in 1965, a 22-year-old poet named Aram Saroyan typed seven letters that would amount to one of the most controversial poems in history. 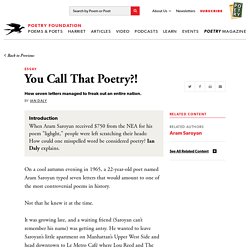 Not that he knew it at the time. It was growing late, and a waiting friend (Saroyan can’t remember his name) was getting antsy. He wanted to leave Saroyan’s little apartment on Manhattan’s Upper West Side and head downtown to Le Metro Café where Lou Reed and The Fugs and Andy Warhol liked to hang out when they were still freaks, not superstars.

But Saroyan held him off. Dead center on the sheet of paper curled in his Royal manual typewriter, he clacked out this single misspelled word: The Mysterious Figure Stealing Books Before Their Release. Illustration: by Madison Ketcham This article was featured in One Great Story, New York’s reading recommendation newsletter. 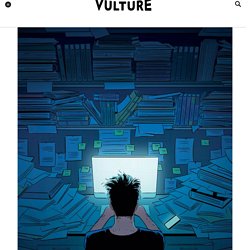 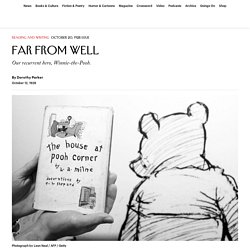 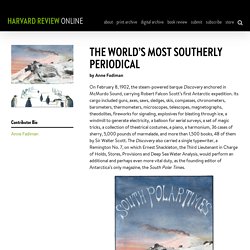 Its cargo included guns, axes, saws, sledges, skis, compasses, chronometers, barometers, thermometers, microscopes, telescopes, magnetographs, theodolites, fireworks for signaling, explosives for blasting through ice, a windmill to generate electricity, a balloon for aerial surveys, a set of magic tricks, a collection of theatrical costumes, a piano, a harmonium, 36 cases of sherry, 5,000 pounds of marmalade, and more than 1,500 books, 48 of them by Sir Walter Scott. The Discovery also carried a single typewriter, a Remington No. 7, on which Ernest Shackleton, the Third Lieutenant in Charge of Holds, Stores, Provisions and Deep Sea Water Analysis, would perform an additional and perhaps even more vital duty, as the founding editor of Antarctica’s only magazine, the South Polar Times.

S.P.T. It was even better. Even Scott got drunk. What are the seven basic literary plots? - The Straight Dope. Dear Cecil:I once read a quotation along the lines that there are only seven basic story lines, and that all the stories in the world can be seen as permutations of those seven. 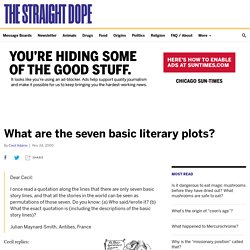 Do you know: (a) Who said/wrote it? (b) What the exact quotation is (including the descriptions of the basic story lines)? Julian Maynard-Smith, Antibes, France Cecil replies: Seven? Sixty-nine. Thirty-six. Twenty. Seven. Three. Two. The Spanish Maze (lost script for tragic play; 1605) - The Lost Media Wiki. Star Wars Ring Theory: The Hidden Artistry of the Prequels. A Virtuoso's Collection by Nathaniel Hawthorne. The other day, having a leisure hour at my disposal, I stepped intoa new museum, to which my notice was casually drawn by a small andunobtrusive sign: "TO BE SEEN HERE, A VIRTUOSO'S COLLECTION. 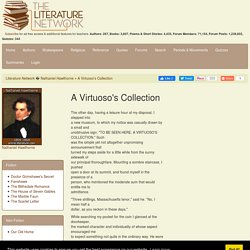 " Suchwas the simple yet not altogether unpromising announcement thatturned my steps aside for a little while from the sunny sidewalk ofour principal thoroughfare. Mounting a sombre staircase, I pushedopen a door at its summit, and found myself in the presence of aperson, who mentioned the moderate sum that would entitle me toadmittance. "Three shillings, Massachusetts tenor," said he. "No, I mean half adollar, as you reckon in these days. " While searching my pocket for the coin I glanced at the doorkeeper,the marked character and individuality of whose aspect encouraged meto expect something not quite in the ordinary way. Directly in front of the portal was the bronze statue of a youthwith winged feet. "How does this animal deserve a place in your collection? " The Paris Review - Blog Archive Robert Coover’s Dark Fantasy-Baseball Novel. 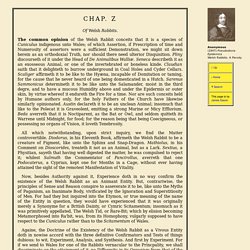 Z Of Welsh Rabbits. The common opinion of the Welsh Rabbit conceits that it is a species of Cuniculus indigenous unto Wales; of which Assertion, if Prescription of time and Numerosity of assertors were a sufficient Demonstration, we might sit down herein as an orthodoxial Truth, nor should there need ulterior Disquisition. Pliny discourseth of it under the Head of De Animalibus Walliæ. Seneca describeth it as an exosseous Animal, or one of the invertebrated or boneless kinde. Alexander Ross's Arcana Microcosmi. Boo the Cat. 1987-2002. 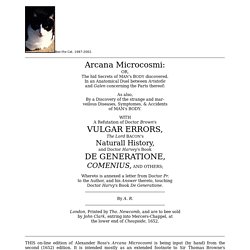 Arcana Microcosmi: OR, The hid Secrets of MAN's BODY discovered. In an Anatomical Duel between Aristotle and Galen concerning the Parts thereof: As also, By a Discovery of the strange and mar- veilous Diseases, Symptomes, & Accidents of MAN's BODY. WITH A Refutation of Doctor Brown'sVULGAR ERRORS,The Lord BACON's Naturall History, and Doctor Harvey's Book DE GENERATIONE,COMENIUS, AND OTHERS; Whereto is annexed a letter from Doctor Pr. to the Author, and his Answer thereto, touching Doctor Harvy's Book De Generatione. By A. London, Printed by Tho.

THIS on-line edition of Alexander Ross's Arcana Microcosmi is being input (by hand) from the second (1652) edition. Cozzens1. About Blooks : Overview. Curiosities of Literature. Formed in 2009, the Archive Team (not to be confused with the archive.org Archive-It Team) is a rogue archivist collective dedicated to saving copies of rapidly dying or deleted websites for the sake of history and digital heritage. The group is 100% composed of volunteers and interested parties, and has expanded into a large amount of related projects for saving online and digital history.

When Dickens met Dostoevsky: a literary mystery - The TLS essay. Late in 2011, Michiko Kakutani opened her New York Times review of Claire Tomalin’s biography of Charles Dickens with “a remarkable account” she had found in its pages. In London for a few days in 1862, Fyodor Dosto­evsky had dropped in on Dickens’s editorial offices and found the writer in an expansive mood. In a letter written by Dostoevsky to an old friend sixteen years later, the writer of so many great confession scenes depicted Dickens baring his creative soul: All the good simple people in his novels, Little Nell, even the holy simpletons like Barnaby Rudge, are what he wanted to have been, and his villains were what he was (or rather, what he found in himself), his cruelty, his attacks of causeless enmity toward those who were help­less and looked to him for comfort, his shrink­ing from those whom he ought to love, being used up in what he wrote.

There were two people in him, he told me: one who feels as he ought to feel and one who feels the opposite. Cue the violins. Six Uncollected Stories by Saki. • The Pond • The Holy War • The Almanack — a Clovis story • A Housing Problem • A Sacrifice to Necessity. A deeply needless book.