Is music theory really #SoWhite? - It Bears Mentioning. What Does Anybody Know About Anything. CuStOmEr GeTs ChArGeD dOuBlE pRiCe Of ThEiR PrOdUcT : PeopleFuckingDying. The Development of Flutes in Europe and Asia. Archeology is a living and vibrant field, constantly unearthing “the earliest” and “the oldest”. 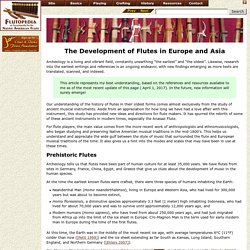 Likewise, research into the earliest writings and references is an ongoing endeavor, with new findings emerging as more texts are translated, scanned, and indexed. This article represents my best understanding, based on the references and resources available to me as of the most recent update of this page ( April 1, 2017). In the future, new information will surely emerge! Our understanding of the history of flutes in their oldest forms comes almost exclusively from the study of ancient musical instruments.

Aside from an appreciation for how long we have had a love affair with this instrument, this study has provided new ideas and directions for flute makers. For flute players, the main value comes from the more recent work of anthropologists and ethnomusicologists, who began studying and preserving Native American musical traditions in the mid-1800's. Prehistoric Flutes Phalangeal Whistles ). The Scientific Truth About DARK SIDE OF THE RAINBOW. A.I. Generated Christmas Carol: Rudolph the Red Nosed Reindeer, King of All the Earth by The Forever Now.

The Conet Project Disc 5. Youtube. The Bad Beginning. Sound_of_space-filling_curves [Herman Haverkort] I am exploring approaches to make sonifications or music of space-filling curves. 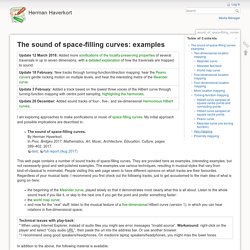 My initial approach and possible implications are described in: The sound of space-filling curves. By Herman Haverkort. In Proc. "Weird Al" Yankovic - Dare To Be Stupid. Musical instrument classification. Variety of recorders from Martin Agricola's 1529 Musica instrumentalis deudsch (Instrumental Music in German) Throughout history, various methods of musical instrument classification have been used in organology. 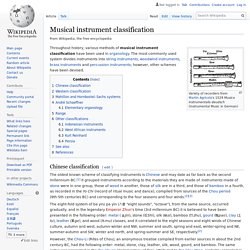 The most commonly used system divides instruments into string instruments, woodwind instruments, brass instruments and percussion instruments; however, other schemes have been devised. Chinese classification[edit] However, the Chou-Li (Rites of Chou), an anonymous treatise compiled from earlier sources in about the 2nd century BC, had the following order: metal, stone, clay, leather, silk, wood, gourd, and bamboo. The same order was presented in the Tso Chuan (Commentary of Tso), attributed to Tso Chiu-Ming, probably compiled in the 4th century BC.[2] Western classification[edit] Keyboard instruments do not fit easily into this scheme. Various names have been assigned to these three traditional Western groupings:[2]:136–138, 157, notes for Chapter 10 André Schaeffner[edit] R. The Most Mysterious Song on the Internet. Recorded song of unknown source "The Most Mysterious Song on the Internet" (also known as "Like the Wind", "Blind the Wind", "Check It In, Check It Out" or "Take It In, Take It Out" after verses in some fan-made lyrics) is the nickname given to a new wave song, most likely composed in the 1980s, whose origin, author, name, and original record date are unknown. 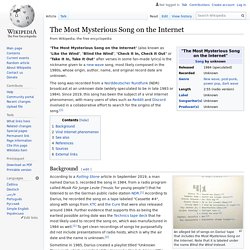 Background[edit] An alleged list of songs on Darius' tape that includes the Most Mysterious Song on the Internet. Note that it is labeled under the name Blind the Wind instead. Sometime in 1985, Darius created a playlist titled "Unknown Pleasures", which consisted of the "songs he liked, but knew little about. " Elodieunderglass: Bother 2 whole birds AND a tree... Shh2607. Happy Rhodes - Find Me (2007) - 01 - "One And Many" Shadowfax - 01 Imaginary Islands. Ylvis - Intolerant [Official music video HD] Archaeologist Dr. Jean-Loup Ringot specialized in prehistoric music demonstrates a Lithophone. □□□ YouTube. "Faerie's Aire and Death Waltz" presented by CSMTA. The Most Unwanted Song (FULL VERSION) 33 Simultaneous Orinoco Flows by Hoytie. Navigating the sounds of the cosmos - 5:4. It’s been with no little excitement that i’ve watched the Curiosity Rover landing on Mars this week. 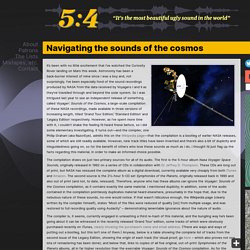 Astronomy has been a back-burner interest of mine since i was a boy and, not surprisingly, i’ve been especially fond of the sound recordings produced by NASA from the data received by Voyagers I and II as they’ve travelled through and beyond the solar system. So i was intrigued last year to see an independent release of something called Voyager: Sounds of the Cosmos, a large-scale compilation of these NASA recordings, made available in three versions of increasing length, titled ‘Grand Tour Edition’, ‘Standard Edition’ and ‘Legacy Edition’ respectively. However, as i’ve spent more time with it, i couldn’t shake the feeling i’d heard these before, so i did some elementary investigating. It turns out—and the compiler, one Philip Graham (aka RazorEye), admits this on the Wikipedia page—that the compilation is a bootleg of earlier NASA releases, some of which are still readily available.