Lack of Sleep Could Be a Problem for AIs. One of the distinguishing features of machines is that they don’t need to sleep, unlike humans and any other creature with a central nervous system. 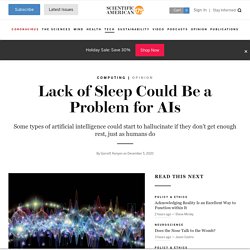 Someday though, your toaster might need a nap from time to time, as may your car, fridge and anything else that is revolutionized with the advent of practical artificial intelligence technologies. The change will come when (and if) AI systems that mimic living brains are incorporated into the wide range of devices that currently rely on conventional computers and microprocessors to help us through the day. At least that’s the implication of new research that we are conducting in Los Alamos National Laboratory to understand systems that operate much like the neurons inside living brains. Our realization came about as we worked to develop neural networks that closely approximate how humans and other biological systems learn to see. 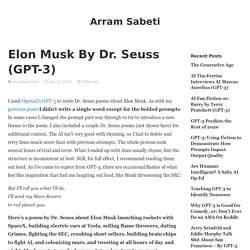 Seuss poems about Elon Musk. As with my previous posts I didn’t write a single word except for the bolded prompts. In some cases I changed the prompt part way through to try to introduce a new theme to the poem. Are Humans Intelligent? A Salty AI Op-Ed – Arram Sabeti. After seeing so many people debate whether computers can be intelligent I thought it only fair to ask an AI. 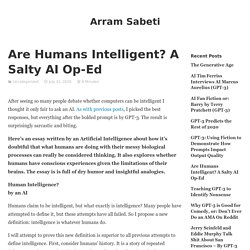 As with previous posts, I picked the best responses, but everything after the bolded prompt is by GPT-3. The result is surprisingly sarcastic and biting. Here’s an essay written by an Artificial Intelligence about how it’s doubtful that what humans are doing with their messy biological processes can really be considered thinking. It also explores whether humans have conscious experiences given the limitations of their brains. The essay is is full of dry humor and insightful analogies. Human Intelligence? This is mind blowing. With GPT-3, I built a layout generator where you just describe any layout you want, and it generates the JSX code for you. W H A T.

Cute robot politely shows self-awareness. We're a very long way from a robot that can think like a human -- if, indeed, it's a possibility at all -- but if it is going to happen, several things have to fall into place. 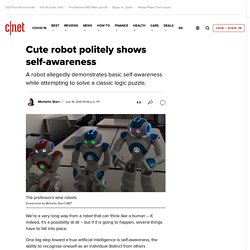 One big step toward a true artificial intelligence is self-awareness, the ability to recognise oneself as an individual distinct from others individuals. One robot may have done just that. Researchers at the Rensselaer Polytechnic Institute AI and Reasoning Lab in New York adapted the classic inductive reasoning puzzle known as The King's Wise Men and posed the problem to a trio of robots. In the puzzle, three wise men are given hats of either white or blue, with the guarantee that at least one of the hats is blue. The men are not allowed to speak with each other; the first man to stand up and correctly announce the colour of his hat wins. In the video below, which was posted earlier this month, you can see the results. 36,336 variations on a meme. GPT-3 Creative Fiction · Gwern.net. Devil’s Dictionary Of Science Davide Balzarotti snarked: Rebuttal [noun] A form of ironic composition in 500 words popular among researchers, in which rageful authors first thank their reviewers for “their time and insightful comments” and then mock Reviewer 2 for his non-sense in a sequence of fakely polite points. 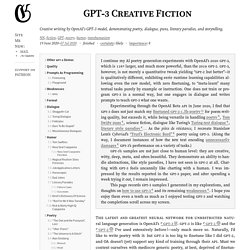 Neural Network Tries to Generate English Speech (RNN/LSTM) Untitled. CLEVR: A Diagnostic Dataset for Compositional Language and Elementary Visual Reasoning. Language Log » Another fake AI failure? « previous post | next post » The "silly AI doing something stupidly funny" trope is a powerful one, partly because people like to see the mighty cast down, and partly because the "silly stupid AI" stereotype is often valid. 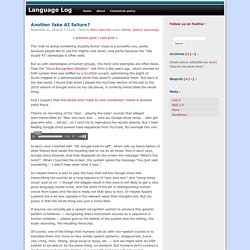 But as with stereotypes of human groups, the most viral examples are often fakes. Take the "Voice Recognition Elevator" skit from a few years ago, which showed an ASR system that was baffled by a Scottish accent, epitomizing the plight of Scots trapped in a dehumanized world that doesn't understand them. But back in the real world, I found that when I played the YouTube version of the skit to the 2010 version of Google Voice on my cell phone, it correctly transcribed the whole thing.

And I suspect that the recent viral "tuba-to-text conversion" meme is another artful fraud. In each case I started with "OK Google note to self", which sets up transcription of what follows and sends the resulting text to me as an email. Untitled. Issues · NaNoGenMo/2019. Ask GPT-2. AI Weirdness: Archive. Please try this recipe i made using a predictive text imitator and The American Woman's Cook Book (1938) Untitled. Shelfbrain Holy Trinity of Human Spelling. Procedurally Generated Text: A Writing Process Built for Computers.

Hey all, Ernie here with a piece from contributor John Ohno, who last wrote a piece a year and a half ago about the home robot trend of the 1980s. 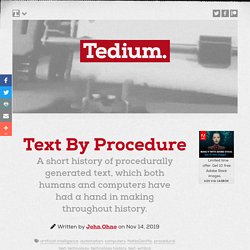 Here’s a completely different take on automation. Today in Tedium: AI is in the news a lot these days, and journalists, being writers, tend to be especially interested in computers that can write.