Scottish Affairs Committee. Get involved Submit evidence online Attend an evidence session Guide for witnesses Membership There are 10 members of this committee. 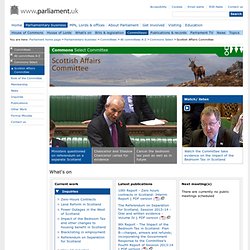 Stay up to date. The Reid Foundation. The Scottish Independence Podcast. Lallands Peat Worrier. Thoughtland. Labour For Independence. Declaration. Scottish Affairs - Articles Online, by Author. Go Lassie Go. I am fortunate in having a gorgeous teenage daughter, but Eleanor and I don't always agree. I am obsessed with Scotland's future. Her preoccupations are musical theatre, boys who look like Justin Bieber and the quest for the perfect black eyeliner. Despite these differences, (though we do share some common ground on the eyeliner issue), Ellie has developed a serene accomodation with her mother's politics, smiling through numerous meetings over the last couple of years. She'd rather be elsewhere... ie on facebook, jamming with her pals on guitar, or exploring the Boots make-up counter. But this week Eleanor thought the SNP - or rather the Scots Independent newspaper - had come up trumps.They decided to give her mum an Oliver.

Despite this disappointment, Eleanor had a marvellous time at the Oliver Brown Awards, and is now calling the hilarious after dinner speaker, Fergus Ewing MSP, the SNP's answer to Michael McIntyre. It was a marvellous day for both of us. An open collaboration of talent focused on driving social and political change in Scotland through a variety of the arts. Scotland Tonight. Spinning around. There’s only one story in the Scottish political media today. 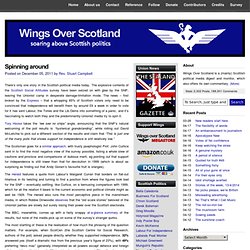 The explosive contents of the Scottish Social Attitudes survey have been seized on with glee by the SNP, leaving the Unionist camp in desperate damage-limitation mode. The news – first broken by the Express – that a whopping 65% of Scottish voters only need to be convinced that independence will benefit them by around £9 a week in order to vote for it has sent Labour, the Tories and the Lib Dems into something of a panic, and it’s fascinating to watch both they and the predominantly-Unionist media try to spin it. Tory Hoose takes the “we see no ships” angle, announcing that the SNP’s natural welcoming of the poll results is “hysterical grandstanding”, while rolling out David McLetchie to pick out a different section of the results and claim that “This is just one of the many polls that shows support for independence is still relatively low.”

The Scotsman goes for a similar approach, with trusty psephologist Prof. Caledonian Mercury - Politics. Scottish Politics. Gerry Hassan – writing, research, policy and ideas. Scottish Review: I Have a close look at this photograph. 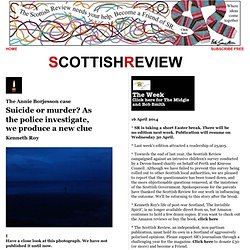 We have not published it until now. The photograph was taken at 4.30pm on 3 December 2013 at Prestwick beach in Ayrshire. It was a bitterly cold, dry afternoon, similar to the weather on the corresponding day eight years earlier. There was a loose dog on the shore, just as there had been on 3 December 2005. The tide was well out on both occasions. For the purposes of our experiment, we asked someone to walk 150 yards from the sea wall – the distance said to have been walked by someone else, now dead, eight years earlier. All that could be seen after 150 yards was a dark, nondescript figure.

Now put yourself in the position of a local man who was walking along Prestwick promenade at the same time, in the same conditions, on 3 December 2005. News in Scotland. Better Nation. Welcome to Better Nation, our Scottish blog, built on four things its editors share: a love of ideas, an essential optimism, an anoraky obsession with politics, and a particular interest in the nation of Scotland – as it has been, as it stands now, and its future prospects. 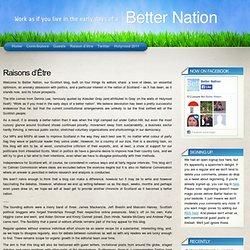 The title comes from Dennis Lee, famously quoted by Alasdair Gray (and attributed to Gray on the walls of Holyrood itself): “Work as if you lived in the early days of a better nation”. We believe devolution has been a pretty successful endeavour thus far, but that the current constitutional arrangements are unlikely to be the final settled will of the Scottish people. As a result, it is already a better nation than it was when the Vigil camped out under Calton Hill, but even the most cursory glance around Scotland shows continued poverty, movement away from sustainability, a business sector hardly thriving, a nervous public sector, stretched voluntary organisations and shortcomings in our democracy.