Scottish coinage. The coinage of Scotland covers a range of currency and coins in Scotland during Classical antiquity, the reign of ancient provincial kings, royal dynasties of the ancient Kingdom of Scotland and the later Mediaeval and Early modern periods. 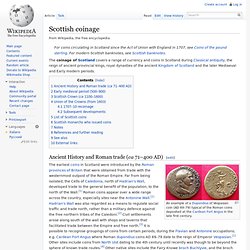 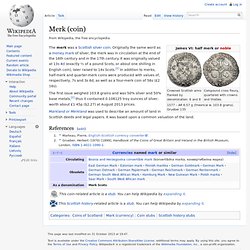 Unicorn (coin) Scottish "unicorns" from the reigns of James III (top left) and James IV (bottom right) The unicorn was a gold coin that formed part of Scottish coinage between 1484 and 1525. 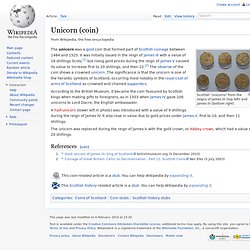 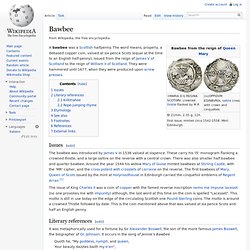 The word means, properly, a debased copper coin, valued at six pence Scots (equal at the time to an English half-penny), issued from the reign of James V of Scotland to the reign of William II of Scotland. They were hammered until 1677, when they were produced upon screw presses. Issues[edit] The issue of King Charles II was a coin of copper with the famed reverse inscription nemo me impune lacessit (no one provokes me with impunity) although, the last word at this time on the coin is spelled "Lacesset". This motto is still in use today on the edge of the circulating Scottish one Pound Sterling coins. Literary references[edit] Quoth he, "My goddess, nymph, and queen, Your beauty dazzles baith my e'en", But deil a beauty had he seen But Jennie’s bawbee Sir Alexander took the hint of his song from a much older one:-

Groat (coin) The name has also been applied to any thick or large coin, such as the Groschen (grosso), a silver coin issued by Tyrol in 1271 and Venice in the 13th century, which was the first of this general size to circulate in the Holy Roman Empire and other parts of Europe. 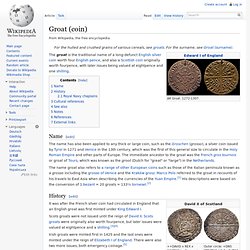 The immediate ancestor to the groat was the French gros tournois or groat of Tours, which was known as the groot (Dutch for "great" or "large") in the Netherlands. The name groat also refers to a range of other European coins such as those of the Italian peninsula known as a grosso including the grosso of Venice and the Kraków grosz.

Marco Polo referred to the groat in recounts of his travels to East Asia when describing the currencies of the Yuan Empire.[1] His descriptions were based on the conversion of 1 bezant = 20 groats = 133⅓ tornesel.[2] It was after the French silver coin had circulated in England that an English groat was first minted under King Edward I. Bodle. A bodle or boddle or bodwell, also known as a half groat or Turner was a Scottish copper coin, of less value than a bawbee, worth about one-sixth of an English penny, first issued under Charles II. 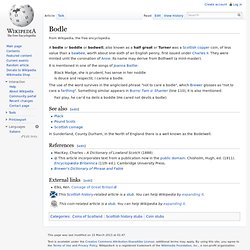 They were minted until the coronation of Anne. Its name may derive from Bothwell (a mint-master). It is mentioned in one of the songs of Joanna Baillie: Black Madge, she is prudent, has sense in her noddle Is douce and respectit; I carena a bodle. Fair play, he car'd na deils a boddle (He cared not devils a bodle) See also[edit] Penny Scots. Penny (Scottish Gaelic: peighinn, but see below) was used in Scottish parlance for money generally; for example, a "penny-fee" was an expression for wages, a "penny-maister" would be a town treasurer, and a "penny-wedding" was one where every guest contributed to pay for the event. 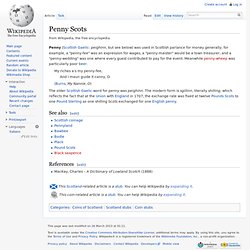 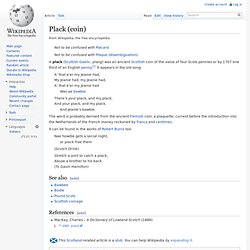 Scottish coins before the United Kingdom. Coinage of Great Britain. 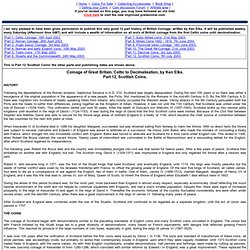