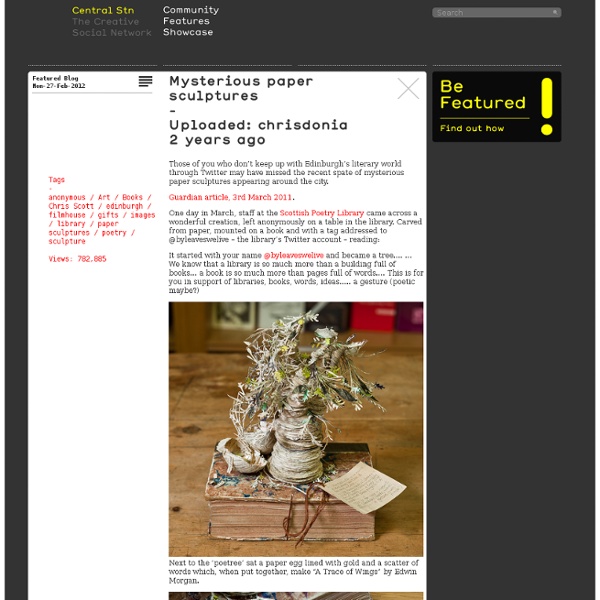 Those of you who don’t keep up with Edinburgh’s literary world through Twitter may have missed the recent spate of mysterious paper sculptures appearing around the city. Guardian article, 3rd March 2011. One day in March, staff at the Scottish Poetry Library came across a wonderful creation, left anonymously on a table in the library. Carved from paper, mounted on a book and with a tag addressed to @byleaveswelive – the library’s Twitter account – reading: It started with your name @byleaveswelive and became a tree.… … We know that a library is so much more than a building full of books… a book is so much more than pages full of words.… This is for you in support of libraries, books, words, ideas….. a gesture (poetic maybe?) Next to the ‘poetree’ sat a paper egg lined with gold and a scatter of words which, when put together, make “A Trace of Wings” by Edwin Morgan. It looked like this was a one-off, a beautiful and delicate piece of art created by a fan of the Poetry Library. The tag?

Paper Trail A modern mystery of poetry, intrigue and art. This is a story of tiny beautiful, evocative artworks… ‘One day in March, staff at the Scottish Poetry Library came across a wonderful creation, left anonymously on a table in the library. Carved from paper, mounted on a book and with a tag addressed to @byleaveswelive – the library’s Twitter account – reading: “It started with your name @byleaveswelive and became a tree.… … We know that a library is so much more than a building full of books… a book is so much more than pages full of words.… This is for you in support of libraries, books, words, ideas….. a gesture (poetic maybe?)”

Ti Point Tork » Blog Archive » Libraries: Where It All Went Wrong November 23, 2011 – 10:07 am It was my pleasure to address the National and State Librarians of Australasia on the eve of their strategic planning meeting in Auckland at the start of November this year. I have been involved in libraries for a few years now, and am always humbled by the expertise, hard work, and dedication that librarians of all stripes have. Yet it’s no revelation that libraries aren’t the great sources of knowledge and information on the web that they were in the pre-Internet days. Edinburgh book sculptures turn the page As symbols of love for libraries go, cutting up books wouldn't be most readers' first thought. But the delicate paper sculptures that have been left anonymously in recent months around Edinburgh's cultural institutions have been enchanting. The latest, and it seems the last, of 10 such ornaments has been found in the Scottish Poetry Library, just off the capital's Royal Mile where the mystery began in March when staff there found the first gift from the Banksy of books … Booksy, perhaps.

Scots American War Memorial Coordinates: The Scots American War Memorial or Scottish American War Memorial is in Princes Street Gardens in Edinburgh. It was called "The Call 1914", and it was erected in 1927 and shows a kilted infrantyman looking towards Castle Rock. Behind the main statue is a frieze showing queues of men answering the call by following a kilted pipe band. The memorial was given by Scottish-Americans to honour Scots who had served in the first World War. Jenny Colgan: what I'm thinking about ... the psychogeography of Edinburgh "It's just weird" a friend says as we stride down the grey boulevard under a angry-looking sky. "Edinburgh always makes me feel unfeasibly nostalgic. And I've never even lived here".

It's Not About Libraries, It's About Amazon When Douglas County (Colorado) Libraries decided to put "Buy this book" buttons on their online catalog pages (example), the response was strong. In just 11 days, the buy buttons had garnered almost 700 clickthroughs. According to Library Director Jamie LaRue, the library is putting buy links direct to publisher-supplied urls when they are provided (often to Barnes and Noble). Mystery sculptures appear at Edinburgh book festival A symbol of literary love, left by an anonymous artist at the Edinburgh book festival It's a whodunnit that any crime writer would be proud of. Two delicate book sculptures were found in the Edinburgh book festival today and none of the staff know who made them.

Kidnapped (novel) As historical fiction, it is set around 18th-century Scottish events, notably the "Appin Murder", which occurred near Ballachulish in 1752 in the aftermath of the Jacobite Rising.[1][2] Many of the characters, and one of the principals, Alan Breck Stewart, were real people. The political situation of the time is portrayed from different viewpoints, and the Scottish Highlanders are treated sympathetically. Sketch of the cruise of the Brig Covenant and the probable course of David Balfour's Wanderings The full title of the book gives away major parts of the plot and creates the false impression that the novel is autobiographical. The central character and narrator is a young man named David Balfour. 20 great things to do in Edinburgh - Time Out Edinburgh By Time Out editors 1. Plan your festival viewing The cultural jamboree that takes over the city in August is generally referred to as 'the Festival', but it comprises separately administrated elements. Film, books, jazz, politics, art all have their own festival, and the Fringe, which broke away from the main shebang in 1998 and starts a week earlier, is a whole other ball game. Plan your schedule using the online resource www.edinburghfestivals.co.uk, or arm yourself with a copy of The List (www.list.co.uk) or the Fringe festival brochure that emerges in June.

9 Reasons Publishers Should Stop Acting Like Libraries Are The Enemy 1. Libraries let people read your books. I know, I know, you think that if it weren’t for libraries more people would buy your books, I have bad news for you, if it weren’t for libraries people would read less not buy more books. There is no guarantee that the people who read a library copy could, or would, choose to buy your book. Let’s face it no one who is willing spend 4 months on the waiting list for their favorite author is going to buy that hardback copy and probably not the trade paperback or paperback either (have you seen the price of mass market paperbacks lately?). Instead of seeing that library book as money out of your pocket consider it another book sold that wouldn’t have been and more importantly consider it the gateway drug to your author.