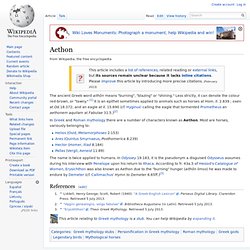 " Less strictly, it can denote the colour red-brown, or "tawny. " [1] It is an epithet sometimes applied to animals such as horses at Hom. Il. 2.839 ; oxen at Od.18.372; and an eagle at Il. 15.690 (cf. Hyginus' calling the eagle that tormented Prometheus an aethonem aquilam at Fabulae 31.5.)[2] In Greek and Roman mythology there are a number of characters known as Aethon. Most are horses, variously belonging to: The name is twice applied to humans. Alectryon (mythology) Alkonost. Gallery[edit] 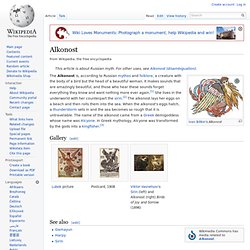 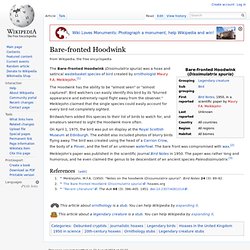 Meiklejohn.[1] The Hoodwink has the ability to be "almost seen" or "almost captured". Bird watchers can easily identify this bird by its "blurred appearance and extremely rapid flight away from the observer. " Meiklejohn claimed that the single species could easily account for every bird not completely sighted. Birdwatchers added this species to their list of birds to watch for, and amateurs seemed to sight the Hoodwink more often. Bennu. Roles[edit] 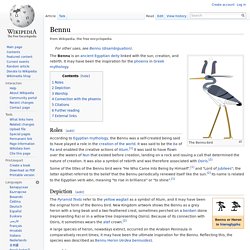 Caladrius. Caladrius, according to the Roman mythology, is a snow-white bird that lives in kings' houses. 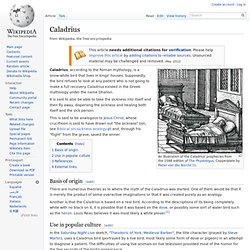 Supposedly, the bird refuses to look at any patient who is not going to make a full recovery. Caladrius existed in the Greek mythology under the name Dhalion. It is said to also be able to take the sickness into itself and then fly away, dispersing the sickness and healing both itself and the sick person. Cetan. Chamrosh. Cinnamon bird. The cinnamon bird, also known as Cinnamologus, Cinomolgus, Cynnamolgus or Cinnibird is a mythical creature described in various bestiaries as a giant bird that collected cinnamon to build its nests. 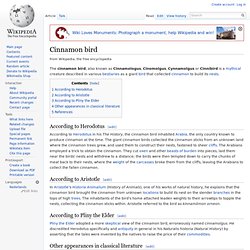 According to Herodotus[edit] Devil Bird. The Devil Bird, locally known as Ulama, is a cryptid of Sri Lanka said to emit bloodcurdling human sounding shrieks in the night from within the jungles. 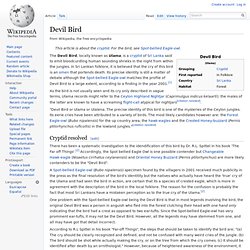 In Sri Lankan folklore, it is believed that the cry of this bird is an omen that portends death. Its precise identity is still a matter of debate although the Spot-bellied Eagle-owl matches the profile of Devil Bird to a large extent, according to a finding in the year 2001.[1] As the bird is not usually seen and its cry only described in vague terms, Ulama records might refer to the Ceylon Highland Nightjar (Caprimulgus indicus kelaarti); the males of the latter are known to have a screaming flight-call atypical for nightjars[citation needed]. "Devil Bird or Ulama or Ulalena. Fenghuang. Fenghuang (Chinese: 鳳凰; pinyin: fènghuáng) are mythological birds of East Asia that reign over all other birds. 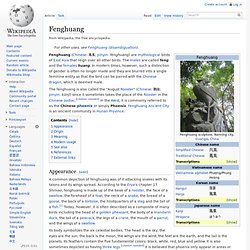 The males are called feng and the females huang. In modern times, however, such a distinction of gender is often no longer made and they are blurred into a single feminine entity so that the bird can be paired with the Chinese dragon, which is deemed male. Appearance[edit] Its body symbolizes the six celestial bodies. Gandaberunda. Depiction[edit] The bird is generally depicted as clutching elephants in its talons and beaks demonstrating its immense strength. 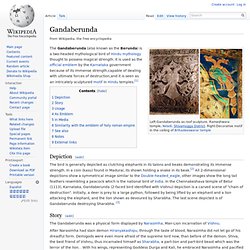 In a coin (kasu) found in Madurai, its shown holding a snake in its beak.[2] All 2-dimensional depictions show a symmetrical image similar to the Double-headed_eagle, other images show the long tail feathers resembling a peacock which is the national bird of India. In the Chennakeshava temple of Belur (1113), Karnataka, Gandaberunda (2-faced bird identified with Vishnu) depiction is a carved scene of "chain of destruction". Gamayun. Gamayun is a prophetic bird of Russian folklore. 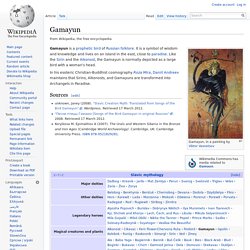 It is a symbol of wisdom and knowledge and lives on an island in the east, close to paradise. Like the Sirin and the Alkonost, the Gamayun is normally depicted as a large bird with a woman's head. In his esoteric Christian-Buddhist cosmography Roza Mira, Daniil Andreev maintains that Sirins, Alkonosts, and Gamayuns are transformed into Archangels in Paradise. Garuda. In Hinduism[edit] Garuda is known as the eternal sworn enemy of the Nāga serpent race and known for feeding exclusively on snakes, such behavior may have referred to the actual Short-toed Eagle of India. The image of Garuda is often used as the charm or amulet to protect the bearer from snake attack and its poison, since the king of birds is an implacable enemy and "devourer of serpent". Garudi Vidya is the mantra against snake poison to remove all kinds of evil.[3]

Giant penguin hoax. The giant penguin is a cryptid, allegedly seen in Florida during the 1940s. The legend has no scientific merit and is at least partly documented to have been a hoax. History[edit] In 1948, several people reported finding large, three-toed animal tracks at Clearwater Beach in Florida. Later, more tracks were found along the shore of Suwannee River, 40 miles (60 kilometers) from the ocean. A young couple also reported having been harassed by a large creature that had risen from the ocean. Later that year a giant penguin was allegedly sighted at distance.

On April 11, 1988, St. Actual prehistoric megafaunal birds only occurred in South Pacific and Cape Horn ocean waters. Griffin. Medieval tapestry, Basel c. 1450 The griffin, griffon, or gryphon (Greek: γρύφων, grýphōn, or γρύπων, grýpōn, early form γρύψ, grýps; Latin: gryphus) is a legendary creature with the body, tail, and back legs of a lion; the head and wings of an eagle; and an eagle's talons as its front feet. Because the lion was traditionally considered the king of the beasts and the eagle the king of birds, the griffin was thought to be an especially powerful and majestic creature.

The griffin was also thought of as king of all creatures. Harpy. In Roman mythology, a harpy (Greek: ἅρπυια, harpyia, pronounced [hárpuja]; Latin: harpeia) was one of the winged spirits best known for constantly stealing all food from Phineus. Hræsvelgr. In Norse mythology, Hræsvelgr (Old Norse "Corpse Swallower") is a giant who takes eagle form. Horus. Horus is one of the oldest and most significant deities in ancient Egyptian religion, who was worshipped from at least the late Predynastic period through to Greco-Roman times. Different forms of Horus are recorded in history and these are treated as distinct gods by Egypt specialists.[1] These various forms may possibly be different perceptions of the same multi-layered deity in which certain attributes or syncretic relationships are emphasized, not necessarily in opposition but complementary to one another, consistent with how the Ancient Egyptians viewed the multiple facets of reality.[2] He was most often depicted as a falcon, most likely a lanner or peregrine, or as a man with a falcon head.[3]

Huginn and Muninn. Huginn and Muninn sit on Odin's shoulders in an illustration from an 18th-century Icelandic manuscript. Ibong Adarna. Story[edit] Don Fernando and his wife Donya Valeriana ruled the kingdom of Berbanya, they have three sons, Don Pedro, Don Diego and Don Juan, of whom Don Juan is his favorite. Nachtkrapp. Oozlum bird. The oozlum bird, also spelled ouzelum, is a legendary creature found in Australian and British folk tales and legends.

Some versions have it that, when startled, the bird will take off and fly around in ever-decreasing circles until it manages to fly up itself, disappearing completely, which adds to its rarity.[1] Other sources state that the bird flies backwards so that it can admire its own beautiful tail feathers, or because while it does not know where it is going, it likes to know where it has been.[2] Owlman. Phoenix (mythology) Ra. Roc (mythology) Sarimanok. Simurgh. Sirin. Strix (mythology) Stymphalian birds. Tengu. Three-legged crow. Thunderbird (mythology) Thoth. Turul. Vermilion Bird. Vucub Caquix. Ziz.