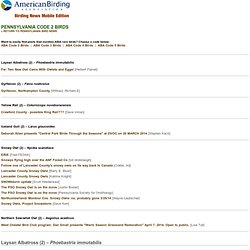 Date: 11 AprFrom: herb1013 AT epix.net Two New Owl Cams With Owlets and Eggs! I know this will not work on PABirds but this will at least give you a sample of what the email is about. Go birdwatching with a Birdingpal from Senegal. Birdwatching and natural history in Dakar and beyond. The ultimate fisher. Lab of Ornithology: Home Study Course. Document Actions Course DescriptionHow does it work? 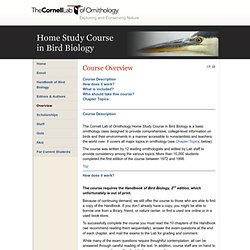 What is included? Who should take this course? Chapter Topics Course Description The Cornell Lab of Ornithology Home Study Course in Bird Biology is a basic ornithology class designed to provide comprehensive, college-level information on birds and their environments in a manner accessible to nonscientists and teachers the world over. The course was written by 12 leading ornithologists and edited by Lab staff to provide consistency among the various topics. 2013 Report — Birds on Private Lands. San Diego Birding Pages. San Diego Birding Pages Site Index Home Kitchen Creek Road is paved all the way; however, Fred Canyon Road is 4WD/high clearance only. 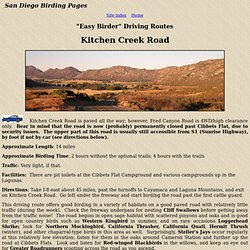 Bear in mind that the road is now (probably) permanently closed past Cibbets Flat, due to security issues. Grouse facts. Ruffed Grouse (Bonasa umbellus) are the most widely distributed resident game bird in North America, living now or recently in all of the Canadian Provinces and in 38 of the 49 states on the continent. 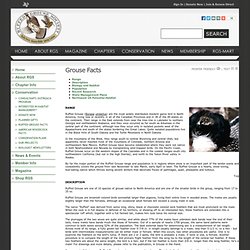 Their range in the East extends from near the tree-line in Labrador to northern Georgia and northeastern Alabama, and they once occurred as far south as Arkansas in the central part of the continent, although now they occur only in isolated pockets west of the Appalachians and south of the states bordering the Great Lakes. Quite isolated populations live in the Black Hills of South Dakota and the Turtle Mountains in North Dakota. In the mountains of the West, they range south to central Wyoming and central Utah, but apparently never reached most of the mountains of Colorado, northern Arizona and northwestern New Mexico. Ruffed Grouse have become established where they were not native in both Newfoundland and Nevada by transplanting wild-trapped birds. 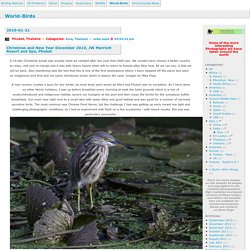 We couldnt have chosen a better country to relax, chill and re-charge and it was with heavy hearts when left to return to Kuwait after New Year. BINOCULAR BASICS. Expedition: South African Penguins. Claire Doe | Thursday, February 06, 2014 “Life on Robben Island” It's been home to a Leper Colony, psychiatric hospital and a maximum security prison and Robben Island was my home for 2 amazing weeks. 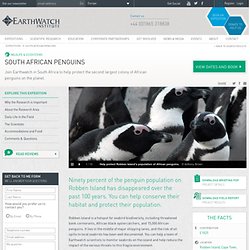 Our main activity was Nest Checking. If there was an adult penguin present, sitting on eggs or chicks, we had to identify it with photos taken previously. If there was no photo record then new photos were taken. Other activities included a Moult Count, Chick Growth Monitoring, Game Counts and Rabbit Counts! Peace Valley Nature CenterPeace Valley Nature Center. About Us - Smithsonian Migratory Bird Center. 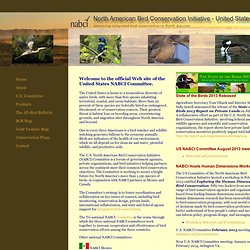 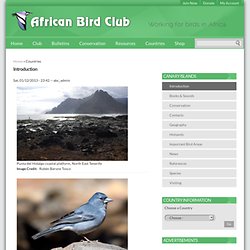 The Canary Islands are part of the Madeira and Canary Islands endemic bird area. On the western and central Canary Islands, laurel forest occurs at 400-1,300 m, and montane pine forest at 800-1,900 m. Feeding cardinals and not house sparrows - Bird Watching Forum - GardenWeb. Whenever I hear people discussing ways to discourage the sparrow I have to ask myself why? 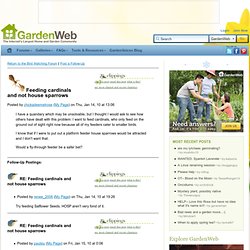 As You can easily see from my photo's when there is an abundant supply of food the birds will all mingle well. From my observation it is only when the food is in short supply that they really begin to be territorial. The question then becomes, why is the seed in short supply? No doubt the answer here is simple economics. People don't care to spend a lot of money on expensive birdseed, only to have it consumed by the less desirable birds and they don't get to see the species they are really interested in.

From my experience the solution here is to shop around for your wild bird seed. How would you like to find a year around source that has a better selection at prices far below the average retail store prices? New York City Birds. Clay and Pat Sutton: Cape May Snow Birds. 10,000 Birds.