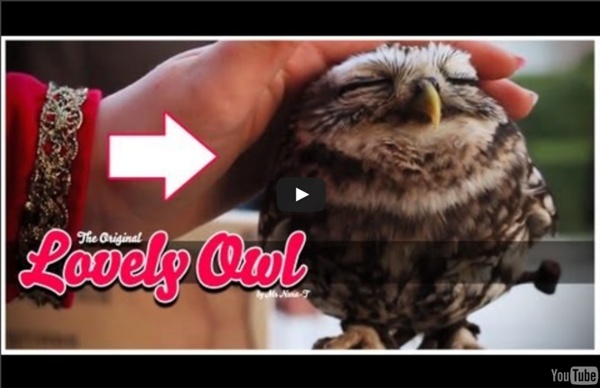 Orphaned baby owls Linford and Christie By Nick Enoch Published: 10:54 GMT, 20 March 2012 | Updated: 14:13 GMT, 20 March 2012 It's not the usual thing you'd expect to find in a kitchen - but these orphaned baby owls seemed right at home as they nestled in two cups. The feathered pair were clearly having a hoot after moving into the home of their wildlife park keeper, Jimmy Robinson. The six-week-old burrowing owlets, nicknamed Linford and Christie, were hatched in an incubator, and are now being hand-reared by Jimmy - who works at Longleat Safari Park in Wiltshire - and are given 24-hour care. Don't worry, owl do the washing-up: The two orphaned baby owls are having a hoot after moving into the home of their Longleat keeper Jimmy Robinson Aha, DVDs... Let's play hide and beak: The owls were hatched at the Hawk Conservancy Trust in Andover, Hampshire, in February He named the birds after the former Olympic gold medallist in honour of this year's Games being held in London (where Linford Christie is coaching some of the athletes).

Nine Hilarious Photographs Of Basset Hounds Running Is there anything funnier than the face of a Basset Hound running? These nine hilarious photos of Basset Hounds running prove the answer is no: Martin Luther King’s Ideas Reverberate In Egypt Today we’re hearing about the influence of Martin Luther King. But did you know, it stretches from the streets of Montgomery, Alabama to Cairo, Egypt? All through a comic book. At the height of the protests in Tahrir Square last year, 29-year-old human rights activist Dalia Ziada handed out an Arabic version of the 1950′s comic book, “Martin Luther King and the Montgomery Story,” which told the story of the famed bus boycott. Dalia had never even heard of King until she attended a civil rights conference in 2006. “The most inspiring thing for me about MLK was that he was a young man when he started the movement that changed the history of the us and probably the whole world. Dalia works in Cairo for the American Islamic Congress and they asked her to translate the Montogomery comic book into Arabic. An Egyptian security officer tried to block publication, but after Dalia met with him using lessons from Martin Luther King. Dalia Ziada is hoping to spread king’s influence further.

Aprender hablar en francés - Très Bien Aurelie Therouanne Teaches: French, Spanish, English Hello! I'm Aurélie, a Frenchie who lives currently in Spain. Atheist Wins Right to Wear "Religious Pasta Strainer" in ID Photo - Culture Austrian atheist Niko Alm supports the Church of the Flying Spaghetti Monster, a joke religion conjured up by atheists who say their make-believe stories are no better or worse than any traditional church's. In 2008, to make a point about his faith's sanctity compared to others, Alm asked to wear a pasta strainer on his head for his driver's license photo. Austrian citizens are only allowed to wear headgear in state IDs for religious purposes, so Alm, a Spaghetti Monster "pastafarian," argued that a colander is his "religious headgear." This week, after avoiding Alm for three years and even making him submit to a psychiatric examination, the Austrian government caved. Alm now has a valid Austrian drivers license, complete with colander. Score one for the freethinkers. photo via Niko Alm and the BBC

Church of the Flying Spaghetti Monster Atheism About Atheism [ Index ] Various introductions to atheism, including its definition; its relationship to agnosticism, theism, and noncognitivism; and its value. Arguments for Atheism [ Index ] In this section, "arguments for atheism" means "arguments for the nonexistence of God." Atheism, Theism, and the Burden of Proof [ Index ] Debates [ Index ] Links to transcripts or reviews of debates specifically about atheism (as opposed to debates about Christianity, Islam, creation/evolution, etc.). Media & Reviews [ Index ] Books, magazines, movies, and book reviews having to do with atheism. Morality and Atheism [ Index ] This page addresses the relationship between morality and atheism, especially in the following four areas: (1) on average, are atheists as moral as theists? Outreach [ Index ] Links to various articles which discuss whether atheists should engage in outreach and, if so, how they may do so effectively. Recommended Sites [ Index ] Jeffery Jay Lowder maintains this page.

The Best Videos on Evolution By Derek Mathias (a.k.a. "Underlings": subscribe!) (Last updated: 06/17/2017) If you argue with creationists—or if you're a creationist who would like to understand why others are not—you need to understand at least the basics of: Science and critical thinking How cosmological and biological evolution work The problems with creationism and intelligent design What the Bible and other religious scriptures actually contain and/or Why people become atheists Below is a collection of over 1,370 links to videos (and more) created by the YouTube community that will provide you with an excellent foundation for understanding evolution and countering creationist claims. Note: Some videos would fit well into several sections—especially those which are part of a series—but each is only listed once. Understanding why so many people believe in religions and other false claims: "Psychology of Belief" (by AntiCitizenX) NEW! Dr. NEW! NEW! NEW! NEW! NEW! NEW! NEW!

About The Atheist Empire your guide to atheism on the internet Help | Banners | Link to AE Founded November, 3rd, 1998 Welcome to the Atheist Empire. I hope you enjoy the web site and appreciate all the years of hard work that has gone into making it the best. For a complete list and description of pages see the site map . View AE in the past: Old Older Oldest -Awards- Golden web Award Esoteric Links Bronze Award Garden of Atheism Award HELP WANTED Help/ Contribute/ Support / Link The Atheist Empire is always looking for inspiration, assistance and ideas. "The world holds two classes of men - intelligent men without religion, and religious men without intelligence." – Abu Ala Al-Maarri Random Atheist Quote Generator "This is the revolution and humanities evolution beyond the plague. This is the Atheist Empire." The Atheist Empire Club hosted by Yahoo! Today the Atheist Empire Club has over 1000 members, 37,0000 posts and is among the web's most active atheist message boards. - Michael Pain (founder/ webmaster)