BIRDS appeared 160 MYA and have since become the most diverse group of land animals on the planet today. Spread from the Arctic to the Antarctic, the 10,000 species of birds range in all colors, shapes and sizes — from the 2in Bee Hummingbird to the 9ft Ostrich.

Birds of Prey. Bird Photography. Endangered Birds. Seabirds. Cher Ami. World War I service[edit] On October 3, 1918, Major Charles Whittlesey and more than 500 men were trapped in a small depression on the side of the hill behind enemy lines without food or ammunition. 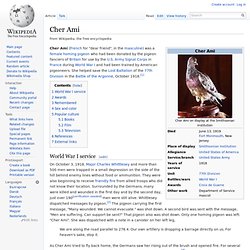 They were also beginning to receive friendly fire from allied troops who did not know their location. Surrounded by the Germans, many were killed and wounded in the first day and by the second day, just over 190[verification needed] men were still alive. Whittlesey dispatched messages by pigeon.[2] The pigeon carrying the first message, "Many wounded. We cannot evacuate. " was shot down. We are along the road parallel to 276.4. As Cher Ami tried to fly back home, the Germans saw her rising out of the brush and opened fire.

Awards[edit] Remembered[edit] To American school children of the 1920s and 1930s, Cher Ami was as well known as any human World War I heroes. Sex and color[edit] Popular culture[edit] Books[edit] Film[edit] Cher Ami... Television[edit] References[edit] External links[edit] 'One in a million' yellow cardinal spotted in Alabama. An extremely rare cardinal has birders and biologists flocking to Shelby County, Alabama this week, as images of a yellow cardinal have circulated around social media. 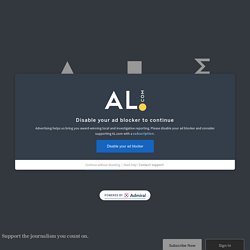 Auburn University biology professor Geoffrey Hill said the cardinal in the photos is an adult male in the same species as the common red cardinal, but carries a genetic mutation that causes what would normally be brilliant red feathers to be bright yellow instead. Alabaster resident Charlie Stephenson first noticed the unusual bird at her backyard feeder in late January and posted about it on Facebook. She said she's been birding for decades but it took her some time to figure out what she was seeing. "I thought 'well there's a bird I've never seen before'," Stephenson said. "Then I realized it was a cardinal, and it was a yellow cardinal.

" The yellow cardinal is still around, she said. Sleeping hummingbird "snores" in Peru. Like humans, corvids may owe their smarts to long childhoods. Human beings typically don’t leave the nest until well into our teenage years—a relatively rare strategy among animals. 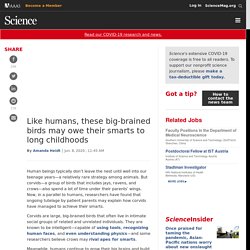 But corvids—a group of birds that includes jays, ravens, and crows—also spend a lot of time under their parents’ wings. Now, in a parallel to humans, researchers have found that ongoing tutelage by patient parents may explain how corvids have managed to achieve their smarts. Corvids are large, big-brained birds that often live in intimate social groups of related and unrelated individuals. They are known to be intelligent—capable of using tools, recognizing human faces, and even understanding physics—and some researchers believe crows may rival apes for smarts. Meanwhile, humans continue to grow their big brains and build up their cognitive abilities during childhood, as their parents feed and protect them. The researchers next took to the field to study how easily wild birds can solve novel tasks, a more direct measurement of cognition. Bird Beaks. Song of the last Kauai O'o (recorded 1987) 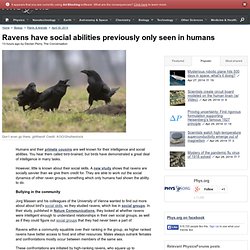 You hear them called bird-brained, but birds have demonstrated a great deal of intelligence in many tasks. However, little is known about their social skills. A new study shows that ravens are socially savvier than we give them credit for. They are able to work out the social dynamics of other raven groups, something which only humans had shown the ability to do. Bullying in the community Jorg Massen and his colleagues of the University of Vienna wanted to find out more about about bird's social skills, so they studied ravens, which live in social groups. Ravens within a community squabble over their ranking in the group, as higher ranked ravens have better access to food and other resources. These confrontations are initiated by high-ranking ravens, who square up to low-ranking birds and emit a specific call to assert their dominance. 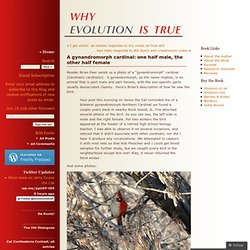 A gynandromorph, as the name implies, is an animal that is part male and part female, with the sex-specific parts usually demarcated cleanly. Here’s Brian’s description of how he saw the bird: Your post this morning on Venus the Cat reminded me of a bilateral gynandromorph Northern Cardinal we found a couple years back in nearby Rock Island, IL. I’ve attached several photos of the bird. As you can see, the left side is male and the right female. And some photos: This, by the way, is a very graphic demonstration of the differences between males and females, with the brighter color of the male almost certainly reflecting sexual selection (with bright colors presumably advantageous in males because they attract females, but disadvantageous in females because they attract predators).