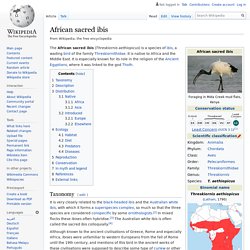 It is native to Africa and the Middle East. It is especially known for its role in the religion of the Ancient Egyptians, where it was linked to the god Thoth. Taxonomy[edit] It is very closely related to the black-headed ibis and the Australian white ibis, with which it forms a superspecies complex, so much so that the three species are considered conspecific by some ornithologists.[2] In mixed flocks these ibises often hybridise.[3] The Australian white ibis is often called the sacred ibis colloquially.[4] Georges Cuvier named it Ibis religiosus in his Le Règne Animal of 1817. In 1842, George Robert Gray reclassified the bird under the new genus Threskiornis, because the type of the genus Tantalus was designated as to be the wood stork, also formerly known as the wood ibis or wood pelican, and Gray decided these birds could not be classified in the same genus.[10][11] Scientific Names of Birds. Ring-necked Pheasant Identification, All About Birds, Cornell Lab of Ornithology.

How Can Birds Sleep While They're Flying? Why birds fly in a v formation. Why Birds Fly in V Formation Finally Explained. Pheasant (Phasianus Colchicus) - Animals. Pheasant Location Pheasant The pheasant is a large sized bird that is found in fields and on the edge of woodland particularly in the Northern Hemisphere. 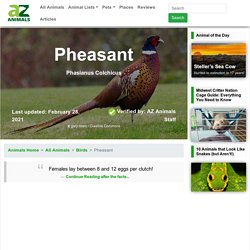 Pheasants are best known for the brightly coloured feathers (in a range of colours) and the long tail feathers of the male pheasant. The pheasant is thought to be native to Asia, with some relation to the wild chickens that are found in the jungles particularly in India. Today the pheasant can be found all over the world and there are more than 35 different species of pheasant today. Pheasants are large sized birds and some pheasant individuals can grow to nearly 90cm in length. Pheasants are omnivorous birds and therefore pheasants eat both plant and animal matter. Simon And Garfunkel Sparrow. BIRDS OF THE WORLD. Birds That Whistle. BirdNote® Birds That Whistle Written by Bob Sundstrom This is BirdNote. 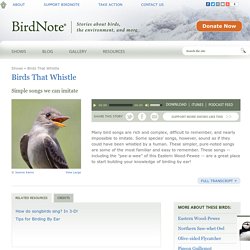 [Olive-sided Flycatcher, 0.10-11] Some of the most familiar and easy to remember bird songs are those that sound like they could have been whistled by a human. Hummingbirds of Mexico. The following 58 species of hummingbirds have been reported from MEXICO; 12 species are endemic and many of those are vulnerable or endangered. 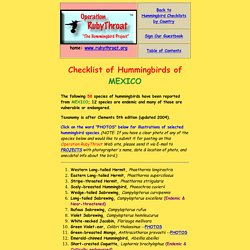 Taxonomy is after Clements 5th edition (updated 2004). Click on the word "PHOTOS" below for illustrations of selected hummingbird species. What Happens When You Put a Hummingbird in a Wind Tunnel? Indigo Bunting. Turtle dove videos, photos and facts - Streptopelia turtur. Red House Finch Song - bird Singing. Red-tailed Hawk. Macaulay Library. ML 458546: Whooper Swan. Ostrich Facts: The World's Largest Bird. Ostriches are large, flightless birds that have long legs and a long neck that protrudes from a round body. 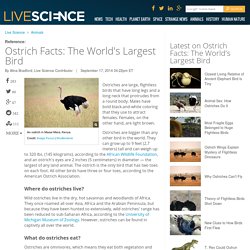 Males have bold black-and-white coloring that they use to attract females. Females, on the other hand, are light brown. Ostriches are bigger than any other bird in the world. They can grow up to 9 feet (2.7 meters) tall and can weigh up to 320 lbs. (145 kilograms), according to the African Wildlife Foundation, and an ostrich's eyes are 2 inches (5 centimeters) in diameter — the largest of any land animal. The ostrich is the only bird that has two toes on each foot. Wild ostriches live in the dry, hot savannas and woodlands of Africa. Ostriches are omnivores, which means they eat both vegetation and meat. Ostriches don't need to drink water; they get all the water they need from the plants they eat.

Male ostriches are called cocks or roosters, and females are called hens. To get a female's attention, males bow and flap their wings outward to display their plumage. Who Will Love the Little Sparrow. Yellow-billed Cuckoo (Coccycus americanus) California Partners in Flight Riparian Bird Conservation Plan Yellow-billed Cuckoo (Coccycus americanus) Photo by James Gallagher, Sea and Sage Audubon Prepared by: Stephen A. 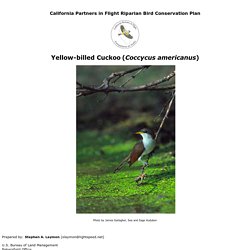 Laymon (slaymon@lightspeed.net) U.S. Laymon, S. References range map The California Yellow-billed Cuckoo (Grinnell and Miller 1944) (C. a. occidentalis): The validity of the subspecies was questioned by Banks (1988). Great black hawk - WOW.com. The great black hawk (Buteogallus urubitinga) is a bird of prey in the family Accipitridae, which also includes the eagles, hawks, and Old World vultures. 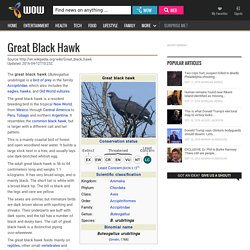 The great black hawk is a resident breeding bird in the tropical New World, from Mexico through Central America to Peru, Tobago and northern Argentina. It resembles the common black hawk, but is larger with a different call and tail pattern. Peacock. Home. Ruffed Grouse Society. Macaws, Macaw Pictures, Macaw Facts. Macaws are beautiful, brilliantly colored members of the parrot family. 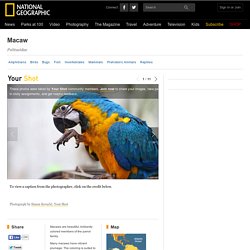 Many macaws have vibrant plumage. The coloring is suited to life in Central and South American rain forests, with their green canopies and colorful fruits and flowers. The birds boast large, powerful beaks that easily crack nuts and seeds, while their dry, scaly tongues have a bone inside them that makes them an effective tool for tapping into fruits. Macaws also have gripping toes that they use to latch onto branches and to grab, hold, and examine items. The birds sport graceful tails that are typically very long.

Macaws are intelligent, social birds that often gather in flocks of 10 to 30 individuals. Red-tailed Hawk, Identification, All About Birds - Cornell Lab of Ornithology. Similar Species The first step with identifying any hawk is to use its size and shape to decide what type you're looking at. 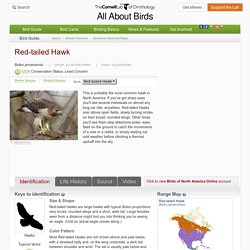 Is it one of the three main groups: buteo, accipiter, or falcon? Buteos have broad, rounded wings and short, wide tails, and you often see them soaring without flapping. Red-shouldered Hawks, another common buteo, tend to be smaller than Red-tails with a banded tail and warm brown barring below. Swainson's Hawk has a dark trailing edge to the underside of the wing, and a dark chest. Regional Differences. Conowingo Dam. Lisel Shoffner Powell | E-Mail | Robert Kemmerlin | E-Mail | Updated 3-16-2011 The Intimidator, Bald Eagle at Conowingo Dam - Lisel Shoffner Powell Introduction The Conowingo Dam is located on the Susquehanna River in northeastern Maryland, about 8 miles above where I-95 crosses the river. 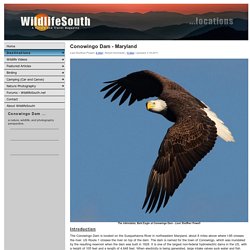 US Route 1 crosses the river on top of the dam. Conowingo Dam. Feeding Birds - FeederWatch. Hyacinth Macaw. Hyacinth macaws are one of the largest species of parrot. They are beautiful, smart, and can even mimic human speech. They have a blue body of feathers, a solid black beak, and yellow circling their eyes and lower part of their beak. They nest in pre-existing holes in trees with a clutch of two to three eggs. Chicks stay with the mother until they are 6 months old. Macaws have four toes—two toes face forward and two face backward. Parrots use vocalizations to keep in constant contact with one another in their habitat, even if they are on opposite sides of the forest.

Spread grain or seed on the ground as well, since this is where Red-winged Blackbirds prefer to feed. Find out more about what this bird likes to eat and what feeder is best by using the Project FeederWatch Common Feeder Birds bird list. You can find Red-winged Blackbirds in the breeding season by visiting cattail marshes and other wetlands, or simply by watching telephone wires on a drive through the country. Sandhill Crane, Identification, All About Birds - Cornell Lab of Ornithology. Similar Species Great Blue Herons are often mistaken for Sandhill Cranes—but they are fairly easy to separate. Great Blue Herons have a black-and-white head, a larger, more daggerlike, yellow bill, and a black-bordered stripe down the center of the neck. They are less bulky than Sandhill Cranes, without the drooping “bustle” at the tail.

Pennsylvania Echoes. Its about meditation, love and family… and waterfowl. A usual spot I visit on walks with cheap camera has become a place to practice observation – some field work for a class I am taking. Home work for my Permaculture Design class demands that I work on passive observation. observation is a passive form of interaction and a type of experience. This class encourage, in part, sitting an ecosystem (ie. a neighborhood, park, farm, pond) and letting go of presumptions and subvocalization (my word choice for thinking in spoken language) and sensing the close proximity world.

If that sounds like meditation, yes its close. Zen, Phenomenology, and the permacultural observational practices of meld well. One thing I have pleasantly seen around the local ponds and man made reservoirs these last couple of months is a growing number of Herons and a new season of young Canadian Geese. Egrets fishing in tandem goose stepping along.