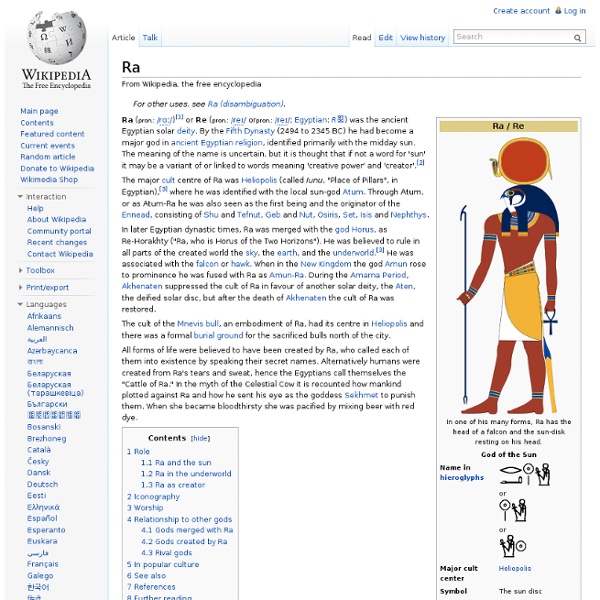 Ra /rɑː/[1] or Re /reɪ/ (Egyptian: 𓂋ꜥ, rˤ) is the ancient Egyptian solar deity. By the Fifth Dynasty (2494 to 2345 BC) he had become a major god in ancient Egyptian religion, identified primarily with the midday sun. The meaning of the name is uncertain, but it is thought that if not a word for 'sun' it may be a variant of or linked to words meaning 'creative power' and 'creator'.[2] In later Egyptian dynastic times, Ra was merged with the god Horus, as Re-Horakhty ("Ra, who is Horus of the Two Horizons"). He was believed to rule in all parts of the created world: the sky, the earth, and the underworld.[3] He was associated with the falcon or hawk. When in the New Kingdom the god Amun rose to prominence he was fused with Ra as Amun-Ra. All forms of life were believed to have been created by Ra, who called each of them into existence by speaking their secret names. Role[edit] Ra and the sun[edit] To the Egyptians, the sun represented light, warmth, and growth. Ra in the underworld[edit]

Sekhmet In Egyptian mythology, Sekhmet /ˈsɛkˌmɛt/[1] or Sachmis (/ˈsækmɨs/; also spelled Sakhmet, Sekhet, or Sakhet, among other spellings) was originally the warrior goddess as well as goddess of healing for Upper Egypt, when the kingdom of Egypt was divided. She is depicted as a lioness, the fiercest hunter known to the Egyptians. It was said that her breath formed the desert. Sekhmet also is a Solar deity, sometimes called the daughter of the sun god Ra and often associated with the goddesses Hathor and Bast. Etymology[edit] Sekhmet's name comes from the Ancient Egyptian word "sekhem" which means "power or might". History[edit] Bust of the Goddess Sakhmet, ca. 1390-1352 B.C.E. The warrior goddess Sekhmet, shown with her sun disk and cobra crown from a relief at the Temple of Kom Ombo. In order to placate Sekhmet's wrath, her priestesses performed a ritual before a different statue of the goddess on each day of the year. Festivals and evolution[edit] In popular culture[edit] See also[edit]

Bastet Photograph of an alabaster cosmetic jar topped with a lioness, representing Bast, an 18th dynasty burial artifact from the tomb of Tutankhamun circa 1323 BC - Cairo Museum Bastet was a goddess in ancient Egyptian religion, worshipped as early as the Second Dynasty (2890 BC). As Bast, she was the goddess of warfare in Lower Egypt, the Nile River delta region, before the unification of the cultures of ancient Egypt. Her name is also spelled Baast, Ubaste, and Baset.[1] The two uniting cultures had deities that shared similar roles and usually the same imagery. Name[edit] Bastet, the form of the name which is most commonly adopted by Egyptologists today because of its use in later dynasties, is a modern convention offering one possible reconstruction. During later dynasties, Bast was assigned a lesser role in the pantheon bearing the name Bastet, but retained. The town of Bast's cult (see below) was known in Greek as Boubastis (Βούβαστις). She is also known as The Eye of Ra. Bubastis[edit]

Atum Atum (/ɑ-tum/), sometimes rendered as Atem or Tem, is an important deity in Egyptian mythology. Name[edit] Atum's name is thought to be derived from the word tem which means to complete or finish. Thus he has been interpreted as being the 'complete one' and also the finisher of the world, which he returns to watery chaos at the end of the creative cycle. As creator he was seen as the underlying substance of the world, the deities and all things being made of his flesh or alternatively being his ka.[2] Origin[edit] Atum is one of the most important and frequently mentioned deities from earliest times, as evidenced by his prominence in the Pyramid Texts, where he is portrayed as both a creator and father to a king.[2] Roles[edit] In the Old Kingdom the Egyptians believed that Atum lifted the dead king's soul from his pyramid to the starry heavens.[6] He was also a solar deity, associated with the primary sun god Ra. Atum is the god of pre-existence and post-existence. Iconography[edit]

Apollo Apollo (Attic, Ionic, and Homeric Greek: Ἀπόλλων, Apollōn (GEN Ἀπόλλωνος); Doric: Ἀπέλλων, Apellōn; Arcadocypriot: Ἀπείλων, Apeilōn; Aeolic: Ἄπλουν, Aploun; Latin: Apollō) is one of the most important and complex of the Olympian deities in classical Greek and Roman religion and Greek and Roman mythology. The ideal of the kouros (a beardless, athletic youth), Apollo has been variously recognized as a god of light and the sun, truth and prophecy, healing, plague, music, poetry, and more. Apollo is the son of Zeus and Leto, and has a twin sister, the chaste huntress Artemis. Etymology Tetradrachm from the Illyro-Paeonian region, representing Apollo The etymology of Apollo is uncertain. Several instances of popular etymology are attested from ancient authors. A Luwian etymology suggested for Apaliunas makes Apollo "The One of Entrapment", perhaps in the sense of "Hunter".[11] Greco-Roman epithets Partial view of the temple of Apollo Epikurios (healer) at Bassae in southern Greece

Baldr "Each arrow overshot his head" (1902) by Elmer Boyd Smith. Baldr (also Balder, Baldur) is a god of light and purity in Norse mythology, and a son of the god Odin and the goddess Frigg. He has numerous brothers, such as Thor and Váli. In the 12th century, Danish accounts by Saxo Grammaticus and other Danish Latin chroniclers recorded a euhemerized account of his story. Name[edit] Jacob Grimm in his Teutonic Mythology (ch. 11) identifies Old Norse Baldr with the Old High German Baldere (2nd Merseburg Charm, Thuringia), Palter (theonym, Bavaria), Paltar (personal name) and with Old English bealdor, baldor "lord, prince, king" (used always with a genitive plural, as in gumena baldor "lord of men", wigena baldor "lord of warriors", et cetera). Grimm traces the etymology of the name to *balþaz, whence Gothic balþs, Old English bald, Old High German pald, all meaning "bold, brave".[1] But the interpretation of Baldr as "the brave god" may be secondary. Attestations[edit] Poetic Edda[edit]

Belenus In Celtic mythology, Bel, Belenos (also Belenus) was a deity worshipped in Gaul, Cisalpine Gaul, and Celtic areas of Austria, Britain and Spain. He is particularly associated with Cornwall, West Cornwall being anciently called Belerion, the place of Bel. He was the Celtic sun god and had shrines from Aquileia on the Adriatic to Kirkby Lonsdale in England.[1][2] The etymology of the name is unclear. Suggestions include "shining one,"[3] "the bright one"[4] and "henbane god".[5] In the Roman period he was identified with Apollo.[1] There are currently 51 known inscriptions dedicated to Belenus, mainly concentrated in Aquileia and Cisalpine Gaul, but also extend into Gallia Narbonensis, Noricum, and far beyond.[4] Images of Belenus sometimes show him to be accompanied by a female, thought to be the Gaulish deity Belisama.[4] In Asturias, Belenus persists as place name. Epithets[edit] An epithet of Belenus may have been Vindonnus. Name variants[edit] References[edit]