Python API Tutorial: Working with Streaming Twitter Data. If you’ve done any data science or data analysis work, you’ve probably read in a CSV file or connected to a database and queried rows. 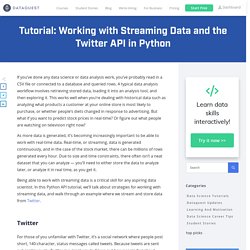 A typical data analysis workflow involves retrieving stored data, loading it into an analysis tool, and then exploring it. This works well when you’re dealing with historical data such as analyzing what products a customer at your online store is most likely to purchase, or whether people’s diets changed in response to advertising.

But what if you want to predict stock prices in real-time? Or figure out what people are watching on television right now? As more data is generated, it’s becoming increasingly important to be able to work with real-time data. Being able to work with streaming data is a critical skill for any aspiring data scientist. Twitter For those of you unfamiliar with Twitter, it’s a social network where people post short, 140-character, status messages called tweets. Event-driven programming This flow might involve a script like this: How to create multiple class objects with a loop in python?

The right and wrong way to set up Python 3 on MacOS. I've been dipping my toe back into Python development as I get ready to head to PyCon US. 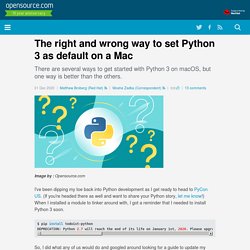 (If you're headed there as well and want to share your Python story, let me know!) When I installed a module to tinker around with, I got a reminder that I needed to install Python 3 soon. $ pip install todoist-python DEPRECATION: Python 2.7 will reach the end of its life on January 1st, 2020. Please upgrade your Python as Python 2.7 won't be maintained after that date. A future version of pip will drop support for Python 2.7. So, I did what any of us would do and googled around looking for a guide to update my development environment, which runs on Mac (the macOS operating system, formerly known as OS X). 1. Moshe Zadka cautions that doing this wrong could result in an unreliable idea of which Python is running that depends too closely on shells loading aliases.

7 Python Libraries For Manipulating Audio That Data Scientists Use. Python is dominating as a programming language thanks to its user-friendly feature. 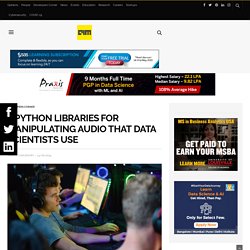 In a recent survey by Analytics India Magazine, 75% of the respondents claimed the importance of Python in data science. In this article, we list down 7 python libraries for manipulating audio. (The list is in no particular order) Pyo is a Python module written in C for digital signal processing script creation. It contains classes for a wide variety of audio signal processing types by which the user will be able to include signal processing chains directly in Python scripts or projects and to manipulate them in real time through the interpreter. The tools in pyo module offer primitives, like mathematical operations on the audio signal, basic signal processing (filters, delays, synthesis generators, etc.), but also complex algorithms to create sound granulation and others creative audio manipulations. 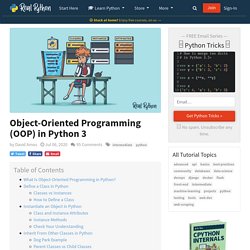 In this tutorial, you’ll learn the basics of object-oriented programming in Python. Conceptually, objects are like the components of a system. Think of a program as a factory assembly line of sorts. At each step of the assembly line a system component processes some material, ultimately transforming raw material into a finished product. An object contains data, like the raw or preprocessed materials at each step on an assembly line, and behavior, like the action each assembly line component performs. Scrapism - Web Scraping Basics. 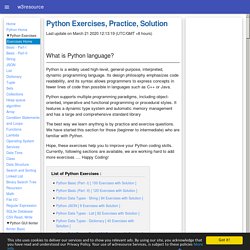 Python is a widely used high-level, general-purpose, interpreted, dynamic programming language. Its design philosophy emphasizes code readability, and its syntax allows programmers to express concepts in fewer lines of code than possible in languages such as C++ or Java. Python supports multiple programming paradigms, including object-oriented, imperative and functional programming or procedural styles. It features a dynamic type system and automatic memory management and has a large and comprehensive standard library The best way we learn anything is by practice and exercise questions. 36 Amazing Python Open Source Projects (v.2019) - Mybridge for Professionals. Twitter Sentiment Analysis – Python, Docker, Elasticsearch, Kibana. In this example, we’ll connect to the Twitter Streaming API, gather tweets (based on a keyword), calculate the sentiment of each tweet, and build a real-time dashboard using the Elasticsearch DB and Kibana to visualize the results. 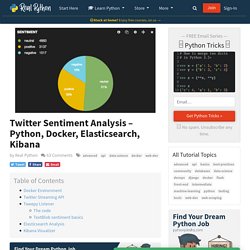 Once built, run the container: $ docker run -d -p 8000:8000 -p 9200:9200 elasticsearch-kibana Finally, run the next two commands in new terminal windows to map the IP address/port combo used by the boot2docker VM to your localhost: Pwittchen/learn-python-the-hard-way: Set of programs written during learning basics of Python and related resources □ PyGame: A Primer on Game Programming in Python. When I started learning computer programming late in the last millennium, it was driven by my desire to write computer games. 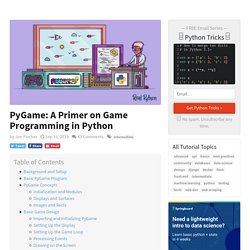 I tried to figure out how to write games in every language and on every platform I learned, including Python. That’s how I discovered pygame and learned how to use it to write games and other graphical programs. At the time, I really wanted a primer on pygame. By the end of this article, you’ll be able to: Draw items on your screenPlay sound effects and musicHandle user inputImplement event loopsDescribe how game programming differs from standard procedural Python programming. Python Tutorial. Fundamental Data Types — Python Reference (The Right Way) 0.1 documentation.