Companies to connect with. Colour tracking. Kinect v2. Youtube examples. Jpbellona. SimpleKinect Application simpleKinect is an interface application for sending data from the Microsoft Kinect to any OSC-enabled application. 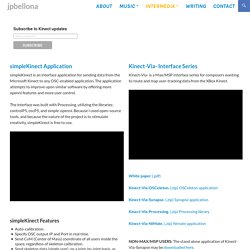 The application attempts to improve upon similar software by offering more openni features and more user control. The interface was built with Processing, utilizing the libraries: controlP5, oscP5, and simple-openni. Because I used open-source tools, and because the nature of the project is to stimulate creativity, simpleKinect is free to use. simpleKinect Features Auto-calibration. SimpleKinect. simpleKinect FAQ page Note: This app was exported as a Mac version. Url?sa=t&rct=j&q=&esrc=s&source=web&cd=4&cad=rja&uact=8&ved=0ahUKEwj70sLtx9nKAhUIdD4KHRSHD8UQFgg1MAM&url= 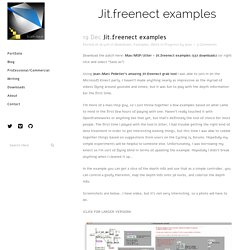 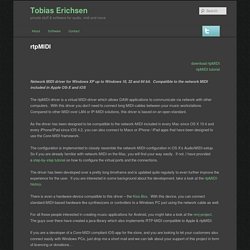 Compatible to the network MIDI included in Apple OS-X and iOS The rtpMIDI-driver is a virtual MIDI-driver which allows DAW-applications to communicate via network with other computers. Topic: Calculating average velocity of a change in a slider « Simon, are you just after the average velocity of getting from 126 to 1, resetting if you go over 126? 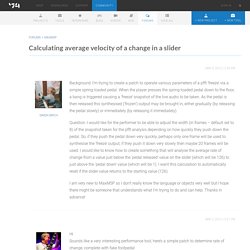 If so, this is probably what you want, again, using Brendans fake pedal — Pasted Max Patch, click to expand. Kinect creates partner out of light for digital dance-off. This article was taken from the June 2014 issue of Wired magazine. 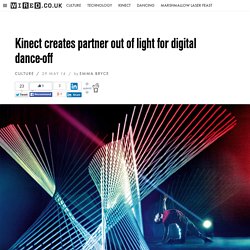 Be the first to read Wired's articles in print before they're posted online, and get your hands on loads of additional content by subscribing online. What does a dancer look like translated into shapes, colours and light? In The Measures Taken, coming to London's Royal Opera House in May, ballet choreographer Alexander Whitley and digital media artists Marshmallow Laser Feast bring a visually rich answer. The team used Microsoft Kinect sensors to track a dancer's movements, render them into a shifting data image and cast them on to a transparent screen in front of the on-stage dancer. "Movement is part of the performance through the lights," Whitley says. The next step is to teach the sensors to react to the dancers' movements independently. Memo/max-skeletonML. Memo Akten on Vimeo.

Kinect, Mobile & Web apps. Dale Phurrough. Outdoor / Tented lighting experience? Sunlight mitigation ideas? Hi, I built this for one of our clients: which worked in full-sunshine in the middle of Sydney (so very bright) as well as of an evening. 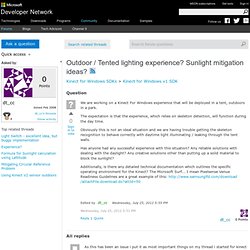 Tobias Fischer - Urban HCI Researcher - Strathclyde University. Huaidan Music. Sound Design. Sonic Art. Interview with Ben Glover, digital theatre masters student. Hi Ben, tell me a little bit about who you are and what you do I’m 22 and I recently graduated from Goldsmiths in creative computing. 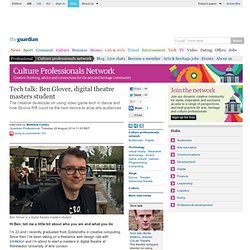 Since then I’ve been taking on a freelance web design role with IntrAktion and I’m about to start a masters in digital theatre at Wimbledon University of Arts London. Being profoundly deaf, which I am, has never been a barrier to enjoying music and performing arts, especially dance. Kinetronic: a motion capture music installation by Ivaylo Chichanov : Music Hackspace. IRCAM Forumnet. The MuBu multi-buffer is a container for sound and motion data. 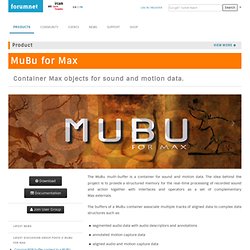 The idea behind the project is to provide a structured memory for the real-time processing of recorded sound and action together with interfaces and operators as a set of complementary Max externals. The buffers of a MuBu container associate multiple tracks of aligned data to complex data structures such as: segmented audio data with audio descriptors and annotationsannotated motion capture dataaligned audio and motion capture data. Tim Thompson's Home Page. “Open” Kinect Tools Go Closed and Dead, Limiting Artist and Hacker Options; Call for Help. The narrative around Kinect and how hackers and artists has always been a little oversimplified. 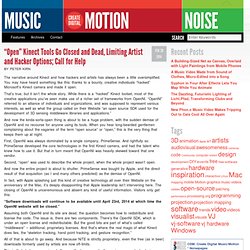 You may have heard something like this: thanks to a bounty, creative individuals “hacked” Microsoft’s Kinect camera and made it open. That’s true, but it isn’t the whole story. From Beautiful Ambient Modern Dance to Dubstep, Gestures to Music in Kinect (Download the Tool) It started as some compelling demos or proof of concept, but it’s plenty real now: the tools for translating movement, gesture, and dance from the body to interactive music march forward. 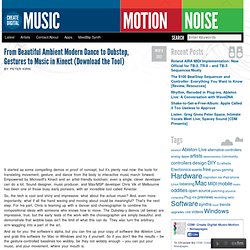 Empowered by Microsoft’s Kinect and an artist-friendly toolchain, even a single, clever developer can do a lot. Sound designer, music producer, and Max/MSP developer Chris Vik of Melbourne has been one of those busy early pioneers, with an incredible tool called Kinectar. So, the tech is cool and shiny and impressive: what about the actual music? Yes, Xbox One Kinect can see you through your clothes. While there are some who are perhaps a little over concerned at the notion of there being an always on camera pointed into your living room, the notion that this camera can peer through your clothing is maybe worth being a little concerned over. The debug mode for the Xbox One Kinect is not something most users will ever see. It’s designed to offer developers the tools needed to make sure their games are reacting when they should be. If you’ve not seen this screen yet, however, it’s nothing short of impressive.