Supperware. How immersive audio will transform virtual experiences. In order to see this embed, you must give consent to Social Media cookies. 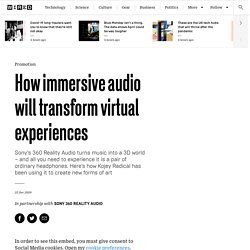 Open my cookie preferences. The British rapper Kojey Radical is strolling through a vast museum filled with imposing classical statues, singing his hit single "Good”. Binaural Recording Techniques - The Complete Guide. There are many applications, where the binaural technique can deliver interesting new sound experiences. 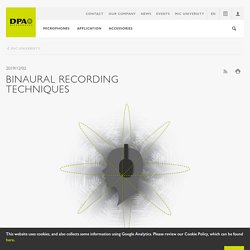 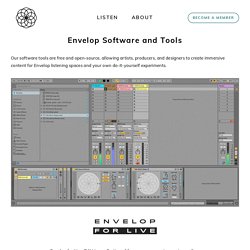 E4L enables artists and designers to create spatial mixes for Envelop venues or any multichannel audio environment, as well as headphone-based VR/AR applications. We believe that immersive sound is the future of audio production. Listening, from within the music, amplifies the emotional, creative and collective impact of sound. E4L is used for the spatialization of immersive sound in all Envelop listening spaces, yet it can also work with any DIY speaker array (4 speakers minimum) or even normal headphones.

E4L creates an open and accessible path for artists, producers, and designers, to create immersive audio and explore 3D music composition. If you have immersive music for an Envelop listening event or performance, feel free to submit your music here. We depend upon your support to continue the development of E4L as a free and open-source tool. Let’s Test: 3D Audio Spatialization Plugins. Now that we have the basics working and are starting to see the light, let’s look at more of the specialized features that really get this spatialization party rockin’.

In most cases this will mean adding one or two components to your workflow. These offer the main tweak-able settings for your spatialization behavior. These behaviors are pretty consistent across engines and middleware. As an example, here are the main control components as presented in Unity and FMOD: LEVEL TWO: Modeled Attenuation & Occlusion Here’s a warning upfront. With that disclaimer out of the way, let’s jump in. Modeled Attenuation (“Can you hear me now?”) Attenuation is one part of what makes a sound seem farther away. 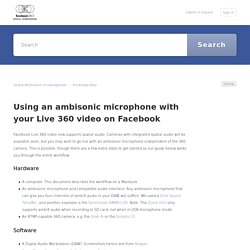 Cameras with integrated spatial audio will be available soon, but you may wish to go live with an ambisonic microphone independent of the 360 camera. This is possible, though there are a few extra steps to get started so our guide below walks you through the entire workflow. Hardware A computer. This document describes the workflow on a Macbook.An ambisonic microphone and compatible audio interface. Software A Digital Audio Workstation (DAW).

If you use Homebrew, the following commands will take care of Soundflower, NGINX, and FFmpeg: Add Spatial Audio to a Video For YouTube – Spatial Workstation Knowledgebase. Spatial audio is supported by YouTube on multiple platforms (see link for details). 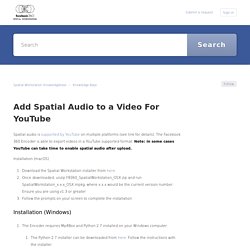 The Facebook 360 Encoder is able to export videos in a YouTube supported format. Note: in some cases YouTube can take time to enable spatial audio after upload. Installation (macOS) Download the Spatial Workstation installer from here.Once downloaded, unzip FB360_SpatialWorkstation_OSX.zip and run SpatialWorkstation_x.x.x_OSX.mpkg, where x.x.x would be the current version number.

Upload 360-degree videos - YouTube Help. How to Download 360 Degree Video (VR video) from YouTube or other Website? There are already many different kinds of video downloader that are available in the market especially because of the existence of 360 degree kinds of videos. 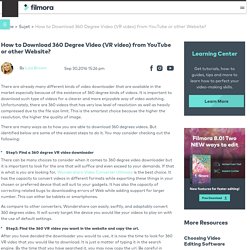 It is important to download such type of videos for a clearer and more enjoyable way of video watching. Unfortunately, there are 360 videos that has very low level of resolution as well as heavily compressed due to the file size limit. This is the smartest choice because the higher the resolution, the higher the quality of image. Test footage. Immersive Videos With Spatial Audio. Top 5 Best 360 Video Players to Play 360 Degree Videos. 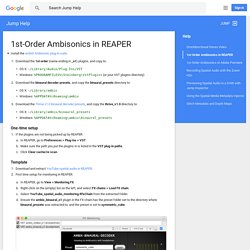 Download the 1st order (name ending in _o1) plugins, and copy to: OS X: ~/Library/Audio/Plug-Ins/VST Windows: %PROGRAMFILES%\Steinberg\VstPlugins (or your VST plugins directory) Download the binaural decoder presets, and copy the binaural_presets directory to: OS X: ~/Library/ambix Windows: %APPDATA%\Roaming\ambix Download the Thrive v1.0 binaural decoder presets, and copy the thrive_v1.0 directory to: OS X: ~/Library/ambix/binaural_presets Windows: %APPDATA%\Roaming\ambix\binaural_presets One-time setup If the plugins are not being picked up by REAPER: In REAPER, go to Preferences > Plug-ins > VST. Make sure the path you put the plugins in is listed in the VST plug-in paths. Your Detailed Guide to Spatial Audio for 360 Video—Using Mostly Free Tools.

The creators of one of YouTube’s first 360 videos with ambisonic audio share their process, from recording to post. 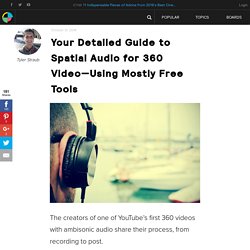 [Editor's Note: No Film School asked the 'Love is All Around' team to detail their experiences creating ambisonic audio when YouTube started to support the technology.] Just in time for Halloween, we released Love is All Around: A Horror Story, a 360º video in YouTube's #Room301 horror series. When YouTube asked us to create a video about our worst fear, we chose rejection. Instead of setting up the video cinematically, director Michael Morgenstern staged it as a play, with different parts of the set representing different locations. 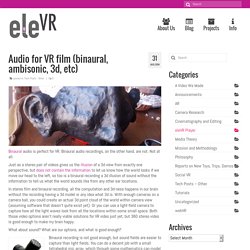 Binaural audio recordings, on the other hand, are not. Not at all. Just as a stereo pair of videos gives us the illusion of a 3d view from exactly one perspective, but does not contain the information to let us know how the world looks if we move our head to the left, so too is a binaural recording a 3d illusion of sound without the information to tell us what the world sounds like from any other ear locations. Adding spatial audio to Ricoh Theta 360 Video. I recently made this 360 video tour of Salford University’s anechoic chamber. You’ll need headphones, and I think navigating these videos works best on a mobile.

The visuals were shot using a Ricoh Theta and the audio with a soundfield microphone. The Theta camera only records mono sound, and the quality is really poor, and hence I captured the sound on a better microphone. I thought it would be really easy to change the soundtrack, but I was wrong. Editing 360 video with spatial audio is currently not straightforward. Morgan Utting: Converting from mono/stereo to multi-channel wav files (Reaper guide) Sometimes you need to take several mono or stereo wav files and collate them together into a single multi-channel file. This is particularly pertinent for ambisonics and for B-format audio in general. I'm writing this because I couldn't find a decent set of instructions online and I had to figure it out myself. Yesterday I had four mono files that I had captured with an ambisonic mic and a field recorder.

The field recorder spits out a mono wav file for each of its inputs. Facebook 360-degree videos: All you need to know. Both Facebook and Google are investing in it, and it seems to be part of the ongoing conversation around virtual and augmented reality experiences. But what exactly are 360-degree videos, and how can you view them? When two of the world's biggest internet companies both adopt a new video technology, it's always worth taking notice. 360-degree videos are spreading throughout YouTube and Facebook, offering a unique perspective on the world. Let's take a closer look at 360-degree videos and how you can view them. What is it?

First let's quickly handle what 360 video is not: it's not virtual reality, or VR, regardless of the close relationship between the two. Whilst 360-degree video content can be viewed using VR headsets, maximising the immersive effect, this is not essential to the experience. It's lower tech than full-on VR, then, but that's also the great strength of 360 videos. Core Sound — TetraMic. (Last updated 11/01/2016) November 1, 2016: We are currently shipping TetraMics roughly two weeks from receiving an order.

Core Sound is pleased to offer its groundbreaking TetraMic, the first portable, single point, stereo & surround sound Ambisonic soundfield microphone to be available for under $1000 (TetraMic alone), or under $1350 fully configured for most multi-track recorders and audio interfaces. Individually calibrated, each TetraMic is the finest performing microphone of its type in the world. Compare its performance to similar soundfield microphones selling for $3000 or more and you'll be quite amazed. The apparent orientation can be rotated, tilted, tumbled or zoomed at will. Sennheiser AMBEO® VR MIC - Microphone 3D AUDIO capture. Welcome to the wonderful world of Ambisonics - a primer by John Leonard.

Ambisonics is a method of recording and reproducing audio in full 360 degree surround – and while it’s not exactly a new invention, recent developments in software encoding have made it a lot more interesting. And with demand for surround source material skyrocketing with the advent of 3D audio for film and immersive platforms such as virtual reality, Ambisonics is an increasingly useful option. But how does Ambisonics work in the real world, how do you get started – and how do you make the most it? Experienced Ambisonics recordist and sound designer John Leonard gives you the details in this special hands-on A Sound Effect primer: The current state of surround sound recording Before we dive into the world of Ambisonics, let’s look at the current state of the art in recording in surround. The Ambisonics difference The Soundfield Microphone Tetrahedral Array.