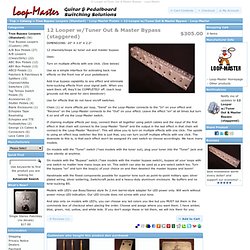 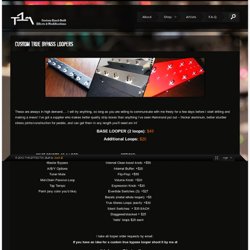 I will try anything, so long as you are willing to communicate with me freely for a few days before I start drilling and making a mess! I’ve got a supplier who makes better quality strip boxes than anything I’ve seen Hammond put out – thicker aluminum, better sturdier stress joints/construction for pedals, and can get them in any length you’ll need em in! BASE LOOPER (2 loops) : $49 Additional Loops: $20 I take all looper order requests by email: If you have an idea for a custom true bypass looper shoot it by me at this1smyne@hotmail.com Shipping is variable depending on the size of the looper and domestic vs international. usually is between $15-25 domestic and $20-45 international. 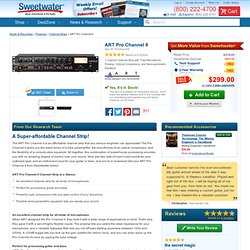 The ART Pro Channel II is an affordable channel strip that any serious engineer can appreciate! The Pro Channel II gives you the warm tones of a tube preamplifier, the smoothness of an optical compressor, and the flexibility of a console-style equalizer. All together, this combination of powerhouse processing provides you with an amazing degree of control over your sound. Over 90 Free VST Effects Plugins.

VST plugins can add power and flexibility to your digital audio workstation.

They can also be very expensive. Here is a collection of over ninety awesome effects plugins that have one thing in common: they're free. Check the details for each plugin to see if it works on your system. Different Woods, Different Tones. Previously, the reason behind the different tones that different woods create has been explained. 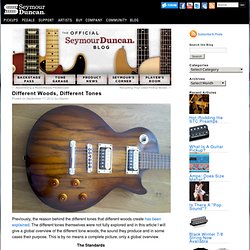 The different tones themselves were not fully explored and in this article I will give a global overview of the different tone woods, the sound they produce and in some cases their purpose. This is by no means a complete picture, only a global overview. The Standards Alder Alder is a tree that grows in medium, temperate climates with a lot of moisture. Ash Ash can come from various sources. Basswood Basswood is a wood that’s being used predominantly on ‘metal’ guitars. 16" DSS Floor Tom Isolation Mount, Legs, Chrome Brass Black [DSS-1616F] - $57.99 : drum parts, snare drums, drumheads, cymbals, world instruments, drumfactorydirect.com. 080402_PF2626_UG_EN02. IEEE 1394. Pavilion Elite HPE-210y Desktop PC Product Specifications HP Pavilion Elite HPE-210y Desktop PC. Figure 9: Back I/O panel 1 - Two 1.2 USB 1.1 ports for mouse and keyboard 2 - S/PDIF optical audio port. 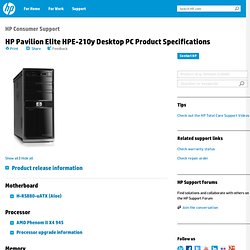 PreSonus Audiobox 1818VSL 18-Channel USB Interface. The flagship in PreSonus' new generation of USB 2.0 audio/MIDI interfaces, the AudioBox 1818VSL takes hardware/software integration to the next level and delivers a combination of features, audio quality, and value that is unprecedented in this product category. Using your computer CPU and PreSonus Virtual StudioLive (VSL) software, AudioBox VSL-series interfaces provide reverb and and delay effects and the same Fat Channel compression, limiting, semi-parametric EQ, and high-pass filter, as the PreSonus StudioLive 16.0.2 digital mixer— all with inaudible latency. It's a great choice for project studios, performing bands, school music labs, and a wide variety of corporate installations and other contractor applications.

Noise. What is noise? 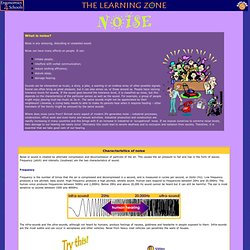 Noise is any annoying, disturbing or unwanted sound. Noise can have many effects on people. It can: Microphone. A microphone (colloquially called a mic or mike; both pronounced /ˈmaɪk/)[1] is an acoustic-to-electric transducer or sensor that converts sound in air into an electrical signal. 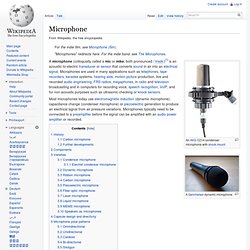 Microphones are used in many applications such as telephones, tape recorders, karaoke systems, hearing aids, motion picture production, live and recorded audio engineering, FRS radios, megaphones, in radio and television broadcasting and in computers for recording voice, speech recognition, VoIP, and for non-acoustic purposes such as ultrasonic checking or knock sensors. Most microphones today use electromagnetic induction (dynamic microphone), capacitance change (condenser microphone) or piezoelectric generation to produce an electrical signal from air pressure variations. Microphones typically need to be connected to a preamplifier before the signal can be amplified with an audio power amplifier or recorded. History[edit] Carbon microphone[edit] Further developments[edit] Cloud Microphones.

Cloud Microphones Cloudlifter CL-Z Variable Impedance Mic Activator Upgrade the Potential of Your Microphone and Preamp Cloudlifter® Mic Activators® use phantom power from your preamp to solve an array of common issues with microphones. 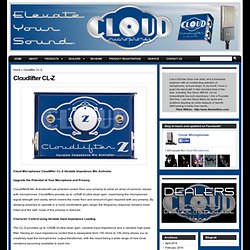 Cloudlifters provide up to +25dB of ultra-clean gain, maximizing the microphones’ signal strength and clarity, which lowers the noise floor and amount of gain required with any preamp. By allowing preamps to operate in a more comfortable gain range, the frequency response remains more intact and the self- noise of the preamp is reduced. Character Control using Variable Input Impedance Loading. Microphone Database. Baby Bottle - Ideal for Vocals, Room Mixing for Drums, Electric Guitar Amps, and Difficult Brass Instruments. 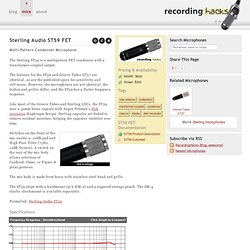 The features for the ST59 and Groove Tubes GT57 are identical, as are the published specs for sensitivity and self-noise. However, the microphones are not identical; the bodies and grilles differ, and the ST59 has a flatter frequency response. Like most of the Groove Tubes and Sterling LDCs, the ST59 uses a 32mm brass capsule with Aspen Pittman’s disk resonator diaphragm design. Switches on the front of the mic enable a -10dB pad and High Pass Filter (75Hz, 12dB/Octave). The mic body is made from brass with stainless steel head and grille. Violet Design Ltd. The Emerald. Violet Design Ltd. The Emerald. AKG Acoustics Perception 220. AKG Acoustics Perception 220 Cardioid Condenser Microphone AKG’s Perception 220 is a revised version of the Perception 200; both are fixed-cardioid, large-diaphragm FET condensers.

The single obvious difference between the two mics is the pad; the -10dB pad on the 200 has been changed to a -20dB pad on the 220. The Perception 220 is essentially a clone of the Neumann U87A circuit, including the negative feedback loop that provides corrective EQ to the capsule. The published frequency plots for the 200 and 220 are identical. Audio-Technica AT4081. AKG Acoustics C 414 B-XLS. AKG Acoustics C 414 XLS. AKG C 414 XL II Multi-Pattern Condenser Microphone Reviewed By Recording, Mixing, And Mastering Engineer Michael Cooper. The AKG C 414 XL II traces its august lineage back to 1953, when the C 12 tube condenser—the first mic to use the CK12 capsule—was introduced. With the subsequent release of the C 414 EB mic in the 1970s, many design changes were put into motion. The tube was replaced with quieter solid-state electronics and the control for changing polar patterns was moved from a remote power supply to the mic body.

When the C 414 B-TLII was unleashed in 1993, mic transformers were discarded in favor of transformerless circuitry, resulting in improved linearity and clarity. But one thing remained constant with each of these redesigns: the goal of retaining the essential acoustic signature of the venerated CK12 capsule, which was common to (albeit modified for) each mic model. (Mic aficionados argue that the original CK12 brass capsule used in the vintage C 12 mic sounded best.) Audio-Technica AT4047/SV. Audio Converter - free audio converter for Mac OS X and Windows. Version: 1.9.5.2 Updated on November 6, 2015 Price: Free MediaHuman Audio Converter is a freeware application for Mac OS X and Windows.

The package in question fail to properly clean up after itself on uninstall, leaving an erroneous entry in Windows add/remove programs panel, and previously caused false positives with the legacy uninstaller. The legacy uninstaller now detects this condition and cleans up after it. * Fixed a bug where the install would fail if a component shared among multiple installers (e.g. TBIA) was already present on the target system and had a higher version number. * Prevent Windows compatibility assistant from displaying specious warning box by removing use of the word "uninstall" in the version resource. * Update to Windows installer removes the reported InstallShield error message. 7. B1031A_P0A0Y_OI_EN. ProFire 2626 - High-Definition 26-in/26-out FireWire Audio Interface with Octane Preamp Technology.