Economists forecast the end of growth. The last few weeks has seen bad news for the global economy, with the US and Europe facing growth slowdowns, and even much vaunted economic powerhouses Brazil, Russia, India and China faltering unexpectedly. 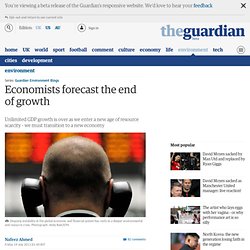 While mainstream economists continue to predict an ongoing 'recovery', other leading experts point to the end of growth as we know it for the foreseeable future. Earlier this month, the International Monetary Fund (IMF) slashed its quarterly forecasts for global GDP growth from 3.3% to 3.1%, and revised down growth estimates for other major powers. The US forecast was downgraded from 1.9% to 1.7%, and Europe is expected to contract 0.6% rather than the originally estimated 0.3%. The IMF also downgraded growth forecasts for 2014. Against this background, evidence has emerged that the era of booming economic growth is over, and that we are entering an age of permanently slow growth - at best. 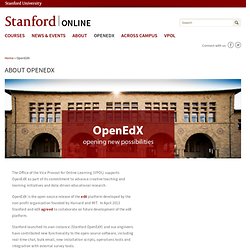 OpenEdX is the open-source release of the edX platform developed by the non-profit organization founded by Harvard and MIT. In April 2013 Stanford and edX agreed to collaborate on future development of the edX platform. Stanford launched its own instance (Stanford OpenEdX) and our engineers have contributed new functionality to the open-source software, including real-time chat, bulk email, new installation scripts, operations tools and integration with external survey tools. In July 2013 the platform was released as open source for developers everywhere to use, improve, and share. Facebook.

World Bank Whistleblower: All Currency Is On The Brink Of Collapse. Last updated on August 1, 2013 at 9:00 pm EDT by in5d Alternative News * Visit in5D Connection where you can find your soul mate or join one of our amazing groups. 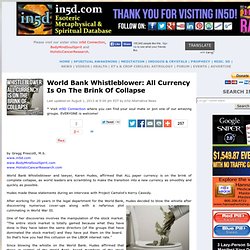 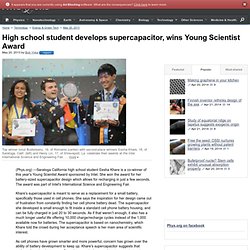 She won the award for her battery-sized supercapacitor design which allows for recharging in just a few seconds. The award was part of Intel's International Science and Engineering Fair. Khare's supercapacitor is meant to serve as a replacement for a small battery, specifically those used in cell phones. She says the inspiration for her design came out of frustration from constantly finding her cell phone battery dead. The supercapacitor she developed is small enough to fit inside a standard cell phone battery housing, and can be fully charged in just 20 to 30 seconds. As cell phones have grown smarter and more powerful, concern has grown over the ability of battery development to keep up.

40% Of US Workers Now Earn Less Than 1968 Minimum Wage. Submitted by Michael Snyder via The Economic Collapse blog, Are American workers paid enough? 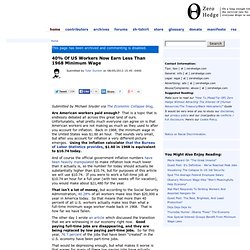 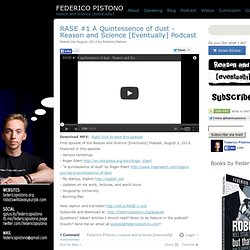 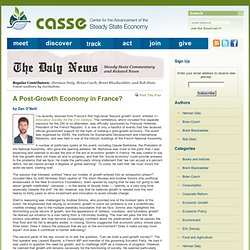 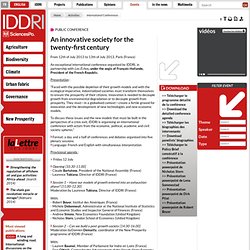 Presentation : "Faced with the possible depletion of their growth models and with the ecological imperative, industrialized societies must transform themselves to ensure the prosperity of their citizens. Innovation is needed to decouple growth from environmental degradation or to decouple growth from prosperity. Roger Billings view on hydrogen. Zeitgeist Media Festival 2013 Main Event - Los Angeles -PromoZMF PROMO 2013 v2. Why Art is Crucial for Change. The Greek Project (HRD) The Greek Project is a most important tool that will help us towards the transition to a Resource Based economy, it is essentially a database of human resources. 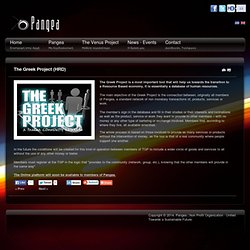 The main objective of the Greek Project is the connection between, originally all members of Pangea, a standard network of non monetary transactions of, products, services or work. The member’s sign in the database and fill in their studies or their interests and inclinations as well as the product, service or work they want to provide to other members – with no money or any other type of bartering or exchange involved. Members find, according to where they live, all available amenities. La decrescita felice secondo Serge Latouche. 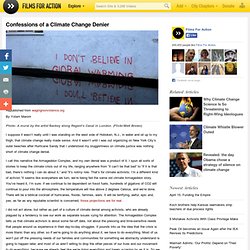 Chinese investors start gobbling up cheap Detroit houses. As Detroit plunges into bankruptcy, Chinese investors looking for good bargains are lining up to buy cheap houses and other real estate. Lured by homes selling for as low as $100, investors are beginning to gobble up dozens of properties at one time. “I have people calling and saying, ‘I’m serious – I wanna buy 100, 200 properties,’” Caroline Chen, a real estate broker, told Quartz. Much of the hype followed a Chinese report that pointed out that houses in Detroit could be purchased for the price of leather shoes. So what does this mean for Detroit? Real estate brokers said most investors don’t plan on moving from China and likely will hold unto the properties until the city sees a resurgence, which raises questions about how they plan to maintain the properties in the meantime. The city has more than 80,000 vacant houses and other buildings that drive down property values, attract arsonists and provide cover for criminals.

Peter Joseph on Singularity 1 on 1: We Are All Subjected To The Same Natural Law System. Network of Wellbeing - NOW. Photos from James Stewart's post in 1,000,000,000 People that demand Tesla's Papers to be released by the CIA. Verso la Fine dell'Economia. Anima Mundi: Permaculture, Peak Oil, Climate Change and the Soul of the World (2011. Many people do not realize that permaculture is much more than about growing fruit and vegetables, it is a whole view incorporating the environment, energy, resources, housing, technology, education, healthcare, the arts, spirituality, psychology, philosophy and agriculture. It provides a realistic alternative for our future sustainability, a gentler way that treads lightly on our Mother Earth. Anima Mundi is not a “How To” video, it is a “Where To” documentary showcasing alternatives like Earthship’s, Permaculture, Permablitz, retrofitting the suburbs, lifeboats, localized food production and currency’s, planned energy decent and Gaian philosophy.

The Venus Project Seminar - Road Map 1 (28 July 2013) 80 Percent Of U.S. Adults Face Near-Poverty, Unemployment: Survey. WASHINGTON — Four out of 5 U.S. adults struggle with joblessness, near-poverty or reliance on welfare for at least parts of their lives, a sign of deteriorating economic security and an elusive American dream. Survey data exclusive to The Associated Press points to an increasingly globalized U.S. economy, the widening gap between rich and poor, and the loss of good-paying manufacturing jobs as reasons for the trend.

The findings come as President Barack Obama tries to renew his administration's emphasis on the economy, saying in recent speeches that his highest priority is to "rebuild ladders of opportunity" and reverse income inequality. As nonwhites approach a numerical majority in the U.S., one question is how public programs to lift the disadvantaged should be best focused – on the affirmative action that historically has tried to eliminate the racial barriers seen as the major impediment to economic equality, or simply on improving socioeconomic status for all, regardless of race. Peter Diamandis on Moore's Law and Changing the World. The Watson Institute presents Mark Blyth on Austerity. Tropical Ecosystems Boost Carbon Dioxide as Temperatures Rise.

NASA scientists and an international team of researchers have found tropical ecosystems can generate significant carbon dioxide when temperatures rise, unlike ecosystems in other parts of the world. The researchers discovered a temperature increase of just 1 degree Celsius in near-surface air temperatures in the tropics leads to an average annual growth rate of atmospheric carbon dioxide equivalent to one-third of the annual global emissions from combustion of fossil fuels and deforestation combined. In tropical ecosystems carbon uptake is reduced at higher temperatures. This finding provides scientists with a key diagnostic tool to better understand the global carbon cycle.

The study provides support for the "carbon-climate feedback" hypothesis proposed by many scientists. This hypothesis asserts a warming climate will lead to accelerated carbon dioxide growth in the atmosphere from vegetation and soils. Ultra-Thin Solar Cells 1000 Times More Powerful Than Conventional PV Per Pound. Such extremely thin and lightweight solar cells have the potential to greatly surpass “any substance other than reactor-grade uranium” with regard to the energy produced per pound of material. According to the researchers, such solar cells could be created by utilizing stacked sheets of one-molecule-thick materials such as graphene or molybdenum disulfide.

The new approach “pushes towards the ultimate power conversion possible from a material” with regard to solar energy,” according to Jeffrey Grossman, the Carl Richard Soderberg Associate Professor of Power Engineering at MIT, and senior author of the new study. Our Technical Reality (2013 Edit) Squirm: The Cathy's Crawly Composters Story (2008. The Bottom Line: A New Economy. 'How on Earth?' - A Book for a New Economy. Due testimoni alle prese con i mali dell'Italia. "Perché la Rete ci rende intelligenti". Rheingold spiega il suo "manuale digitale"

Michel Bauwens: Four Scenarios for the Collaborative Economy. 'How on Earth?' - A Book for a New Economy. The RBE10K Project - The Crowdsourced Resource-Based Economy Knowledgebase. One Community Partners ~ Working Together for a Better Future. One Community seeks to create and strengthen win-win relationships with other forward-thinking people and organizations throughout the world. A Language for the Future. Il GRANDE SEGRETO SULL' ALIMENTAZIONE UMANA.

Water Contamination from Fracking: Jessica Ernst Releases Groundbreaking Report. How to Survive the Economic Collapse and Be Happy. What to Say When They Say It’s Impossible by Andrea Brower. Andrew McAfee: What will future jobs look like?