Hempcrete Could Change The Way We Build Everything 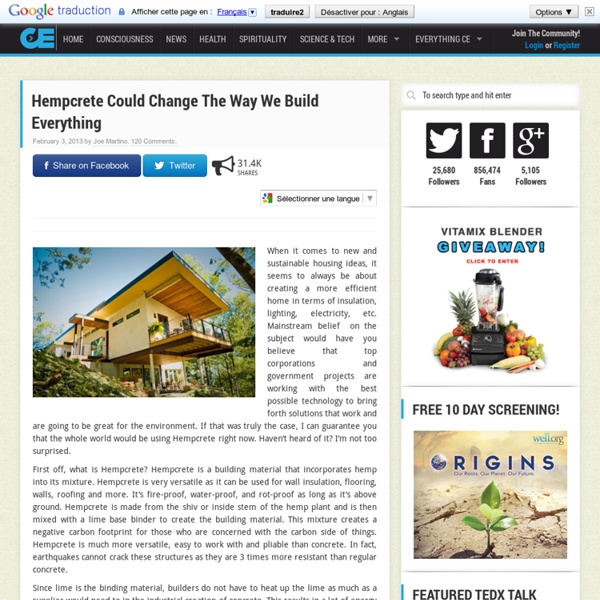 When it comes to new and sustainable housing ideas, it seems to always be about creating a more efficient home in terms of insulation, lighting, electricity, etc. Mainstream belief on the subject would have you believe that top corporations and government projects are working with the best possible technology to bring forth solutions that work and are going to be great for the environment. If that was truly the case, I can guarantee you that the whole world would be using Hempcrete right now. Haven’t heard of it? I’m not too surprised. First off, what is Hempcrete? Since lime is the binding material, builders do not have to heat up the lime as much as a supplier would need to in the industrial creation of concrete. conservation when producing Hempcrete vs. concrete. Hempcrete is a much more superior building material due to the fact that it is a very strong, lightweight and breathable material. petrify but is still incredibly strong.

Scotland Community Shows The World Why All Homes Should Be Made Out of Hemp Many people are becoming aware of ways to live that are more harmonious with the planet. It seems that we are transitioning to a very ancient understanding of how to operate here on Earth, with a very advanced ‘know how’ of technologies and methods to begin making that transition. New ways of living are coming to light and although you may not hear about them often, communities all over the world are starting to implement them. A new sustainable housing project in the Northwest of Scotland will use industrial hemp as the main building material. It’s made of a prefabricated wall system called Hembuild, which is a mixture of the plant’s woody core and a lime-based binder.

Kickstarter:FurnLab Open Source CNC: 7500$ for 8'x4' [UPDATE: some design info is posted in Update #4] Hi, I’m Jeffrey Matthias, founder of FurnLab, and I want to help you see your awesome designs get produced on your own CNC machine. I also want to reduce dependence on doodads that are made in one land only to be shipped way over to another land. So here’s the pitch.FurnLab will fully develop and release building plans for an open source, production-ready, precise and fast CNC machine that anyone with a toolbox and a dream can assemble for less than: > $2500 for a 2’x4’ machine> $4000 for a 4’x4’ machine> $7500 for a 4’x8’ machine

10 Signs We Live in a False Economy It’s time to admit that we live in a false economy. Smoke and mirrors are used to make us believe the economy is real, but it’s all an elaborate illusion. Out of one side of the establishment’s mouth we hear excitement about “green shoots”, and out of the other side comes breathless warnings of fiscal cliffs and the urgent need for unlimited bailouts by the Fed. We hear the people begging for jobs and the politicians promising them, but politicians can’t create jobs. We see people camped out to buy stuff on Black Friday indicating the consumer economy is seemingly thriving, only to find out everything was bought on credit.

Hemp building What is it? It’s building with ‘hempcrete’ which is a mixture of the following three components: hemp ‘shiv’: hemp is a plant that has been used for millennia for making textiles. CEB Press - Open Source Ecology - Iceweasel - 4000$ Hint: Last updated April 2017 Link to CEB Press Build June 2015 The CEB Story 2012. from Open Source Ecology on Vimeo. CEB Press (aka "The Liberator"). See CEB_Press_6#Instructional_Files for detailed pictures of the latest machine build (v6), and for an exact picture of v6. Version shown is v3.

crete - Hemp Building Materials - Hemp For Houses by Rolf B. Priesnitz, Hemphasis.net & Wikipedia Houses built from hemp have been found to use less energy, create less waste and take less fuel to heat than conventionally constructed homes. Hemp is perhaps best known for its Omega-3 and -6 fatty acids that make it a great addition to a healthy diet, and as a cotton substitute in ecologically-sound clothing and bedding. But it is also a versatile, environmentally-sound building material. A hemp crop can be grown without the use of herbicides or insecticides and produces up to four tonnes of material per acre per year.

Ultra-Thin Solar Cells 1000 Times More Powerful Than Conventional PV Per Pound Such extremely thin and lightweight solar cells have the potential to greatly surpass “any substance other than reactor-grade uranium” with regard to the energy produced per pound of material. According to the researchers, such solar cells could be created by utilizing stacked sheets of one-molecule-thick materials such as graphene or molybdenum disulfide. The new approach “pushes towards the ultimate power conversion possible from a material” with regard to solar energy,” according to Jeffrey Grossman, the Carl Richard Soderberg Associate Professor of Power Engineering at MIT, and senior author of the new study. The researchers say that even utilizing just a single bilayer of two-dimensional materials — such as graphene, molybdenum disulfide, molybdenum diselenide, etc — it’s possible to create solar cells with efficiencies of 1-2%.

Tropical Ecosystems Boost Carbon Dioxide as Temperatures Rise NASA scientists and an international team of researchers have found tropical ecosystems can generate significant carbon dioxide when temperatures rise, unlike ecosystems in other parts of the world. The researchers discovered a temperature increase of just 1 degree Celsius in near-surface air temperatures in the tropics leads to an average annual growth rate of atmospheric carbon dioxide equivalent to one-third of the annual global emissions from combustion of fossil fuels and deforestation combined. In tropical ecosystems carbon uptake is reduced at higher temperatures. This finding provides scientists with a key diagnostic tool to better understand the global carbon cycle.

80 Percent Of U.S. Adults Face Near-Poverty, Unemployment: Survey WASHINGTON — Four out of 5 U.S. adults struggle with joblessness, near-poverty or reliance on welfare for at least parts of their lives, a sign of deteriorating economic security and an elusive American dream. Survey data exclusive to The Associated Press points to an increasingly globalized U.S. economy, the widening gap between rich and poor, and the loss of good-paying manufacturing jobs as reasons for the trend. The findings come as President Barack Obama tries to renew his administration's emphasis on the economy, saying in recent speeches that his highest priority is to "rebuild ladders of opportunity" and reverse income inequality.

Hemp houses could be greener, fire-resistant and built like Lego All in all, Terry Radford's new product — with apologies to Pink Floyd — looks to be anything but another brick in a wall. That's because the president of Just BioFiber, based in Airdrie, Alta., believes it has come up with a hempcrete-based brick that is more than the equal of the usual homebuilding materials. Radford, president and CEO of Just BioFiber, says his company has found a way to combine hempcrete — the wooden core of the hemp plant — with lime and water to create a building block that he believes has the potential to change the way we build homes. Radford says the product is as environmentally-friendly as it is user-friendly.