The Geometry Code: Universal Symbolic Mirrors of Natural Laws Within Us 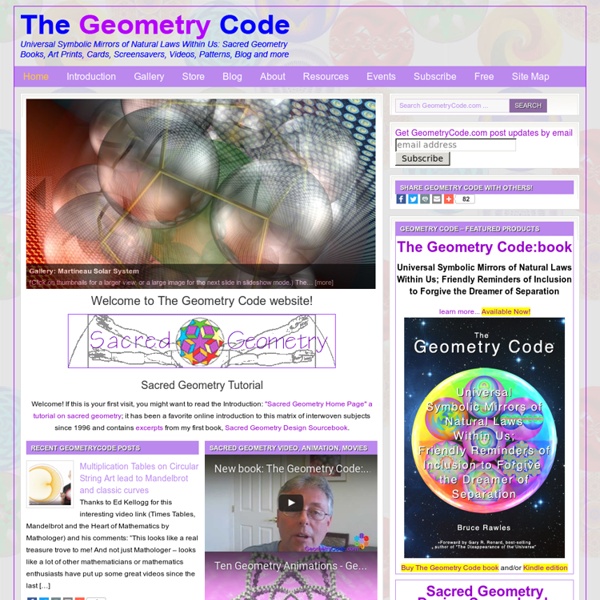 What Ancient Secrets Lie Within the Flower of Life? The Flower of Life is a name for a geometrical figure composed of seven or more evenly-spaced, overlapping circles. This figure, used as a decorative motif since ancient times, forms a flower-like pattern with the symmetrical structure of a hexagon. The perfect form, proportion and harmony of the flower of life has been known to philosophers, architects and artist around the world. ~ Isochronic Tones ~ : ~ Brainvawe Frequencies I didn't do enough research before I published this post. Now I have searched the web for more references and found that they differs?! And I've forgotten the source to where I found these frequencies... (my bad). Get Yourself in an Awesome Avatar for Free!!! Create yourself an awesome and colorful avatar for your profile picture of designoptimal.com and other social media such as Facebook, Twitter and Google+. This tool allows user to generate a high quality avatar image in 3 formats including .svg file type which is a high quality vector image type. Here are some key features of this cool avatar generator. Both Males and Females avatarsMore than 300 Graphic Parts.

Rope-Length Minimization with Kangaroo – Grasshopper I'm a Mathematician who studies knots, among other objects. One of the ways to study a knot is to keep the radius of the rope used to tie it fixed, while shrinking its length as much as possible. This process is called "Rope Length Minimization." Flower of Life - A Thorough Explaination The flower of life is a geometrical shape composed of multiple evenly-spaced, overlapping circles arranged in a flower like pattern with six fold symmetry like a hexagon. The perfect form, proportion and harmony of the FOL has been known to philosophers, architects and artist around the world. Pagans consider it to be sacred geometry containing ancient religious value depicting the fundamental forms of space and time. In the pagan sense, it is believed to contain a type of Akashic Record of basic information of all living things and is the visual expression of the connections of life that run through all sentient beings.

Sound Horoscope A horoscope is a snapshot of a single moment in our solar system as seen from a geocentrical point of view. Actually the luminaries and planets are not fixed but constantly rotating. These rotations can be translated into different swinging systems, amongst others into acoustically recognisable sounds. Already in the year 1619 the great astrologer and astronomer Johannes Kepler wrote a book about "Harmonices mundi" (Latin: The Harmony of the World).

Wooden Gear Clock Plans from Hawaii by Clayton Boyer The Celestial Mechanical Calendar shows the day of the week, day of the month and the month. In addition, she indicates the Zodiac Sun Sign and New Moon Ascension sign, has a MoonPhase Ball that indicates a nearly exact reflection of what the actual moon is doing in the night sky. She also has a Full Moon Ascension Window, and an Orrery showing the synodic rotations of the three closest planets, Mercury, Venus and Mars and indicates when they go into retrograde. The revival of an ancient science At the other end of the scientific spectrum of contemporary science an ancient science is being restored. For ages it has been preserved carefully. It is more or less an art form and it is called ‘sacred geometry’. Why sacred, what is so sacred about geometry? In spiritual mystery-schools of the past it was taught that sacred geometry has been used by God to create the universe.

Sound Healing Classes - Globe Institute Intention As shown by Dr. Emoto, if you focus love on water, it will create a beautiful geometric crystalline pattern when it freezes. If you focus any negativity on water (such as hate) it will form a discordant, chaotic pattern. Many other clinical studies (covered in Lynn McTaggart's book, "The Intention Experiment") have proven that your intention not only affects matter, it affects yourself and others. Quantum Physics actually explains how this works. Top 10 of the Most Insane Optical Illusions [Image Source: Youtube/ButchVideo] Optical illusions can be some of the most difficult to understand and impossible to comprehend things in the world. Even if you know the trick behind the illusion, it is near impossible to keep your eyes in line with reality. Since our brain takes jumps and makes assumptions in processing visual cues, it can often lead to our eyes being tricked into seeing something that isn’t there. We have put together the top 10 most viral and insane optical illusions on the internet. Can you figure them out?

Spirit Into Matter — The Geometry of Life When I was a teenager, my deep concern about the global threat of nuclear annihilation set me on a life-long quest to understand the nature of energy and how we can relate to it harmoniously instead of violently. Many find it beautiful, and that is a tribute to nature and to the computer skills of Goa Lobaugh and the liquid buddha studios team as well as Robert W. Gray. But most important are the implications of what is represented. This model indicates that the Universe is an infinite sea of living energy and that there are predictable patterns by which energy is concentrated into the whirlpools that we typically know as particles, atoms, molecules, planets, galaxies and clusters. These insights point to the possibility of accessing energy through harmonic resonance with the naturally occurring toroidal fields — and I have witnessed this manifested numerous times by successful inventors.

Sound Healing Classes - Globe Institute The Hierarchy of Sound, Music and Energy There are 4 primary levels of energy in the universe when looking at it all from a frequency or vibration level. As we go down the list each aspect becomes more and more powerful. 1. Frequencies – Many people these days are now focused on pure frequency. Pure frequency manifests in the world through Tuning Forks, Tone Generators, Flutes (not completely pure), Crystal Bowls (also not completely pure), Concert Pitch and Tuning Systems. Infinity Mirror UV String Art Welcome to my second Instructable! The Infinity String Art is the union of an Infinity Mirror with UV LEDs and String Art. The optical effect desired is an infinite reflection of a glowing string art. The main idea is to put a String Art between the mirror and the reflective glass of an Infinity Mirror.

Music and Sacred Geometry In the Brahma Samhita story written in Sanskrit the first born son of the creator god is called Narada which means Music. I take this as an acknowledgement of the importance of Music as one of, if not the, primary language and metaphor that creates existence. Music spans the gulf between the impersonal patterns of number woven into frequencies of sound and the very personal emotional response to the archetypes of embodied experience. It strikes me as interesting that it is not just being suggested that vibration is the source of existence but that it is the beautiful patterns that can be perceived within the vibrations !