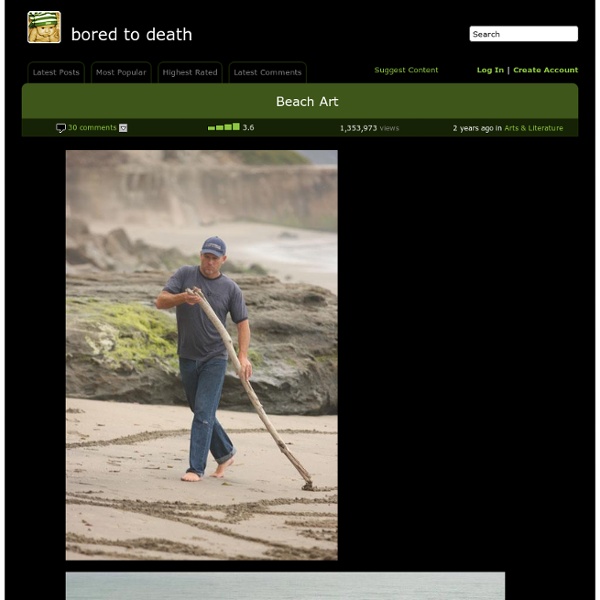 Why We Need to Start Seeing the Classical World in Color Modern technology has revealed an irrefutable, if unpopular, truth: many of the statues, reliefs, and sarcophagi created in the ancient Western world were in fact painted. Marble was a precious material for Greco-Roman artisans, but it was considered a canvas, not the finished product for sculpture. It was carefully selected and then often painted in gold, red, green, black, white, and brown, among other colors. 106 of the most beloved Street Art Photos – Year 2010 More info. More info. More Banksy on Street Art Utopia. More info. More 3D on Street Art Utopia.

Amazingly Creative Drawing Vs Photography This wonderful work has done by a very talented Belgian painter, illustrator, portraitist, caricaturist and photographer Ben Heine. This creative artist was born in Abidjan, Ivory Coast. He Studied graphic arts and sculpture and I also have a degree in journalism. Sacred geometry As worldview and cosmology[edit] The belief that God created the universe according to a geometric plan has ancient origins. Plutarch attributed the belief to Plato, writing that "Plato said God geometrizes continually" (Convivialium disputationum, liber 8,2). In modern times the mathematician Carl Friedrich Gauss adapted this quote, saying "God arithmetizes".[2] At least as late as Johannes Kepler (1571–1630), a belief in the geometric underpinnings of the cosmos persisted among scientists.

Culture - The rare blue the Maya invented In 17th Century Europe, when Michelangelo Merisi da Caravaggio and Peter Paul Rubens painted their famous masterworks, ultramarine blue pigment made from the semi-precious lapis lazuli stone was mined far away in Afghanistan and cost more than its weight in gold. Only the most illustrious painters were allowed to use the costly material, while lesser artists were forced to use duller colours that faded under the sun. It wasn’t until the industrial revolution in the 19th Century that a synthetic alternative was invented, and true ultramarine blue finally became widely available.

Book Of Art January 18th, 2011 Books of Art by Isaac Salazar, a simple idea well executed. found at ffffound Portfolio These are pictures of some past work Website Designed by Susan McMahon © 2013 at Homestead™ Get a Website and List Your Business Crazy Illustrations By Chow Hon Lam Chow Hon Lam is a t-shirt designer and a humorous illustrator from Malaysia. He has been completed this crazy project called Flying Mouse 365, which is create 1 design per day. I hope his illustrations can bring some smile and entertainment to the world. About the author

Woman Parodies Celebrity Culture in Hilarious Photo Recreation Series Instagram has proven to be a bastion of some of the most strange celebrity portraits, and Australian comedian Celeste Barber is ready and eager to point out just how ridiculous they really are. In her long-running series called #CelesteChallengeAccepted, she posts side-by-side photos of herself (and sometimes her husband) mimicking the bizarre images of celebrities and high fashion models. Not one to sugarcoat things, Barber’s photo recreations add a biting wit and heavy dose of realism to the often idyllic or just plain silly celebrity pictures. #CelesteChallengeAccepted started in January 2015 as a “fun experiment to see what it would look like for an average person to photograph herself doing rich people things.”

The Art of OaKoAk Some of the best street art has humor built into it. In the case of French street artist, OaKoAk, they take what the city gives to them and creates a witty street piece. Who hasn't wanted to turn a tile doorstep into a piano, or a sewer cover into a Viking's shield? Learn How to Draw Grass, Pencil Drawing Lesson Use of Negative Drawing in Art The title of this article is really too specific as the techniques described here apply as much to the drawing of hair as to grass. This is also an introduction to the use of "negative" drawing - drawing around white space, which only exists in your mind until you surround it with positive marks. I will cover "negative drawing" in more detail in a later article. So, what is "negative" drawing? What do you see when you look at this picture on the right?

The Myth of Whiteness in Classical Sculpture Aphrodisias was home to a thriving cadre of high-end artists until the seventh century A.D., when an earthquake caused it to fall into ruin. In 1961, archeologists began systematically excavating the city, storing thousands of sculptural fragments in depots. When Abbe arrived there, several decades later, he started poking around the depots and was astonished to find that many statues had flecks of color: red pigment on lips, black pigment on coils of hair, mirrorlike gilding on limbs.