The Scam Wall Street Learned From the Mafia 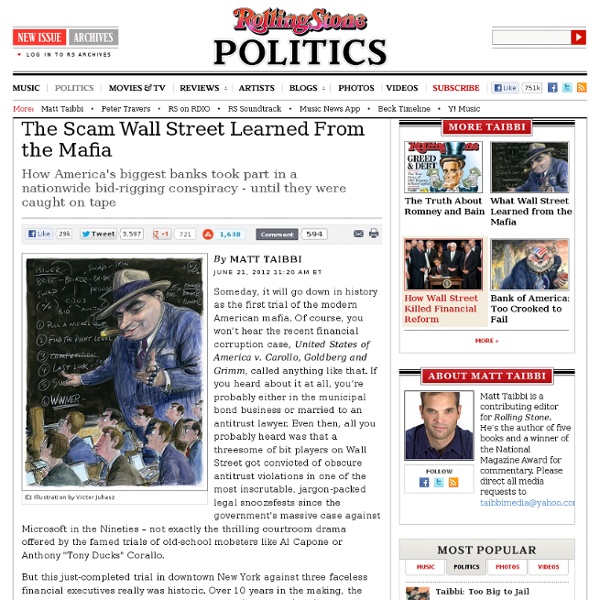 Ménage à Trois The Strange Non-Death of Neoliberalism. Colin Crouch urges us to rethink the role of giant corporations in the state vs market analysis of neoliberalism Neoliberalism has ruled the Western world and most of the globe since the 1970’s. It is based on a market-driven approach to monetary policy and it promotes control of the economy by the private sector, which is supposedly more efficient than the public sector. For many, the recent financial collapse provided a strong blow to neoliberal economic theories. Indeed, the collapse was seen as a failure of banks, champions of neoliberalism and driven by profit maximization.

Bankers constantly lying, defrauding; most still not in jail Has there ever been a better time to be a disastrously inept banker? Well, probably — over the course of human civilization it’s almost always been a pretty good time to be a banker — but today’s finance titans seem uniquely immune to punishment of any sort. Remember how JPMorgan Chase accidentally lost $2 billion in a “hedge”-slash-huge stupid bet placed by a guy in the Chief Investment Office? Funny story, it will actually end up being closer to $6 billion, or maybe like $9 billion — who can be sure, math is pretty complicated, it’s all imaginary money anyway — as the bank attempts to extricate itself from the insanely complex losing trade made by the office that is supposed to manage the bank’s risk. Funnier story: Remember when Mr.

More Icelandic bankers arrested Iceland’s special prosecutor into the banking crisis has confirmed that raids have taken place today and that arrests have been made. The Central Bank of Iceland is among the institutions under investigation. Special Prosecutor, Olafur Thor Hauksson told Visir.is that house searches are taking place in at least three places today as part of investigations into the central bank, MP Bank and Straumur Bank. Stefan Johann Stefansson at the central bank confirmed that agents were in the building conducting searches; and it has also been confirmed that searches are underway at MP Bank and ALMC (formerly Straumur).

Timeline: Barclays' widening Libor-fixing scandal 6 February 2013Last updated at 11:51 Libor, the London inter-bank lending rate, is considered to be one of the most crucial interest rates in finance. It underpins trillions of pounds worth of loans and financial contracts. So, when Barclays was fined £290m in June last year after some of its derivatives traders were found to have attempted to rig this key rate, already weak public confidence in banks was harmed further.

How Political Clout Made Banks Too Big to Fail The U.S. has historically kept the financial sector in check through a combination of sound principles and serendipitous decisions. But as the financial system gained strength in recent years, it also gained political influence. In the last decade, it has become too concentrated and too powerful, which has damaged not only the economy but the financial sector itself. When Is A Crime Not Considered Criminal? When It’s Hatched On Wall Street All over Europe and in much of the rest of the world, a new fictional hero has engaged the fascination of millions of readers. His name is Mikael Blomkvist, and he’s the protagonist of the late Stieg Larsson’s Millennium Trilogy. These thrillers, set against the background of high financial crimes and misdemeanours, have become global best-sellers, doubtless in part owing to their gripping plots, elaborate mysteries and engaging characters. But their success is also indisputably a by-product of the macroeconomic chicaneries of our era and the human catastrophes they have wrought. Larsson understood that financial crimes are far from victimless.

10 Signs We Live in a False Economy It’s time to admit that we live in a false economy. Smoke and mirrors are used to make us believe the economy is real, but it’s all an elaborate illusion. Out of one side of the establishment’s mouth we hear excitement about “green shoots”, and out of the other side comes breathless warnings of fiscal cliffs and the urgent need for unlimited bailouts by the Fed. We hear the people begging for jobs and the politicians promising them, but politicians can’t create jobs. We see people camped out to buy stuff on Black Friday indicating the consumer economy is seemingly thriving, only to find out everything was bought on credit. The corporate media does their best to distract us from seeing anything real.

The Cracks Begin To Show in The UK Economy (1/2) Bio John Weeks is a professor emeritus of the University of London's School of Oriental and African Studies and author of Economics of the 1%: How Mainstream Economics Serves the Rich, Obscures Reality and Distorts Policy. His recent policy work includes a supplemental unemployment program for the European Union and advising the central banks of Argentina and Zambia. Ozlem Onaran is Professor of Economics at the University of Greenwich in the U.K. She regularly publishes research studies on globalization, income distribution, and business investment in publications such as the Cambridge Journal of Economics and Labour. She recently co-authored a major study for the International Labour Organization on the relative importance of decent wages versus high profits as an engine of economic growth in several countries throughout the world.

Heist of the century: Wall Street's role in the financial crisis Bernard L Madoff ran the biggest Ponzi scheme in history, operating it for 30 years and causing cash losses of $19.5bn. Shortly after the scheme collapsed and Madoff confessed in 2008, evidence began to surface that for years, major banks had suspected he was a fraud. None of them reported their suspicions to the authorities, and several banks decided to make money from him without, of course, risking any of their own funds. Theories about his fraud varied. Some thought he might have access to insider information. Bicycle Thieves, beware: How Twitter found my stolen bike Courtesy Jody Rosen. Around 2:20 p.m. last Thursday, my bicycle was stolen in Brooklyn, N.Y. Just after 6:45 that evening, I got the bike back—5 miles away, on the other side of the East River, near Union Square in Manhattan.