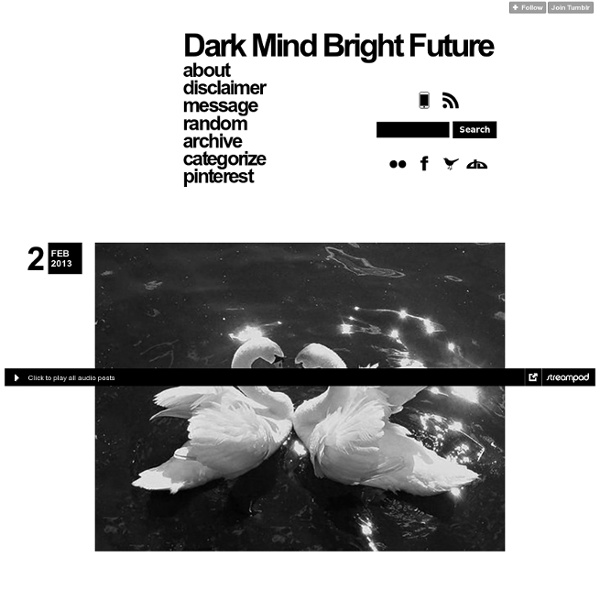 The Flop Box A bad beginning makes a bad ending 4/14/2014 Peter Saul curated group show @ Zürcher Studio Austin Lee Taylor McKimens Karl Wirsum Judith Hudson Seoul-based artist Choi Xooang Choi Xooang has a amazing capability to pull you into his work. Mixing amazing technique and utter blunt shocking images Choi is climbing my list of favorite artists. Half of his outlandish pieces are not done just for shock value but to bring awareness to human right abuses in Korea. Also, if you like this, you’ll most likely enjoy the work of Emil Alzamora.

Dynamic Drive CSS Library- CSS3 demos Welcome to Dynamic Drive's new CSS library! Here you'll find original, practical CSS codes and examples such as CSS menus to give your site a visual boast. Page 1 of 4 pages 1 2 3 > Last » Flat flipping menu buttons verticalThis is the vertical vesion of the original Flat Flipping menu buttons. Coilhouse “Alternative subcultures. They were a crucial aspect of industrial civilization in the two previous centuries. They were where industrial civilization went to dream. A sort of unconscious R&D, exploring alternative social strategies … but they became extinct.” “Extinct?”“We started picking them before they could ripen. Eternal Flame Waterfall Photographer: Carl Crumley Summary Author: Carl Crumley; Jim Foster It seems that there's only one waterfall in the world with a flame burning beneath it. This is the Eternal Flame Waterfall, on Shale Creek, in Chestnut Ridge Park, near Buffalo, New York. A pocket of natural methane gas in an alcove below the waterfall seeps out through a fracture in the rocks. The flame goes out from time to time (it's not really eternal) but is easy to relight. We'll probably never know who the first person to light it was.

The 20 Most-Clichéd Tourist Photos Chances are, after travelling around the world, you'll want to bring back some evidence of your latest trip — and we're not just referring to postcards and tsotchkes. We're talking photos because, let's face it: Pic or it didn't happen. Much like how there's a bucket list of must-visit destinations, there're now must-take photos that correspond with each spot on a map. Everyday, at landmarks around the world, tourists take nearly identical photos in practically mandatory poses.