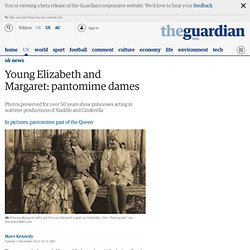 The principal boy's legs, in silk stockings, are absolutely tremendous. An album of photographs preserved in mint condition for more than half a century by a Windsor schoolboy who starred in Christmas pantomimes also shows his fellow cast members: they include Aladdin, played by one Elizabeth Windsor, and her sister, Margaret, as, appropriately, a princess.

400-Year-Old Spanish Warships Discovered Under Pacific Ocean Off Peru. An extraordinarily well-preserved woolly mammoth uncovered in Siberia was revealed to the public for the first time this week in Japan. 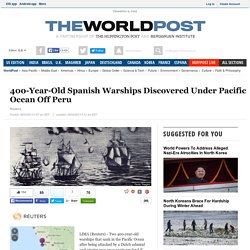 While the baby female is not the first mammoth to be recently dug up in the remote region of Russia, what makes this find so special is the extent to which the animal's carcass is still intact. (Photo: ITN) Read more here Archaeologists say they have discovered some of the world's oldest known primitive writing, dating back about 5,000 years, in eastern China, and some of the markings etched on broken axes resemble a modern Chinese character. Churchill, Stalin Got Super Drunk Together During World War 2. Two years before Yalta, Winston Churchill and Joseph Stalin met for a late-night wartime meeting. 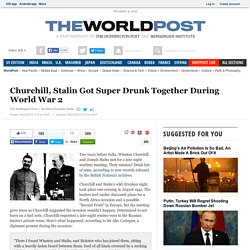 Their mission? Drink lots of wine, according to new records released by the British National Archives. Churchill and Stalin's wild drunken night took place one evening in August 1942. 5 Ridiculous Myths Everyone Believes About the Wild West. The Wild West, aka the Old West, was an astoundingly awesome period in American history that every person who has ever played Red Dead Redemption wants to emulate. 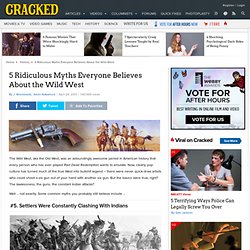 Now, clearly pop culture has turned much of the true West into bullshit legend -- there were never quick-draw artists who could shoot a six gun out of your hand with another six gun. But the basics were true, right? The lawlessness, the guns, the constant Indian attacks? Well ... not exactly. Some common myths you probably still believe include ... #5. May 1945: “Operation Sunrise”, Nazi Germany Surrenders, But… on May 7, 8, or 9? After the Casablanca Conference of January 1943, the Americans, British, and Soviets had agreed that there would be no separate negotiations with Nazi Germany with respect to its capitulation, and that the Germander surrender would have to be unconditional. 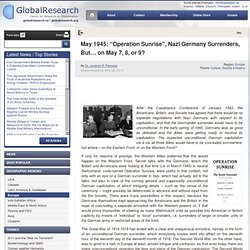 In the early spring of 1945, Germany was as good as defeated and the Allies were getting ready to receive its capitulation. The expected unconditional German capitulation vis-à-vis all three Allies would have to be concluded somewhere, but where – on the Eastern Front, or on the Western Front? Japan World War 2 Sex Slavery Denials: Conservative Government Pulls Back On Denials Of War Atrocities. TOKYO -- Japan has acknowledged that it conducted only a limited investigation before claiming there was no official evidence that its imperial troops coerced Asian women into sexual slavery before and during World War II. 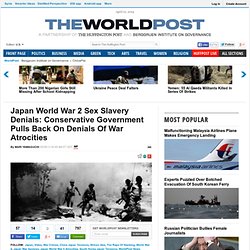 A parliamentary statement signed Tuesday by Prime Minister Shinzo Abe acknowledged the government had a set of documents produced by a postwar international military tribunal containing testimony by Japanese soldiers about abducting Chinese women as military sex slaves. That evidence apparently was not included in Japan's only investigation of the issue, in 1991-1993. Tuesday's parliamentary statement also said documents showing forcible sex slavery may still exist.

The statement did not say whether the government plans to consider the documents as evidence showing that troops had coerced women into sexual slavery. Abe has acknowledged so-called "comfort women" existed but denied they were coerced into prostitution, citing a lack of official evidence.

Bollywood cinema: 10 lesser-known facts. 2 May 2013Last updated at 23:57 GMT Indian cinema began 100 years ago with the first "Bollywood" film, although the term was only coined many years later. 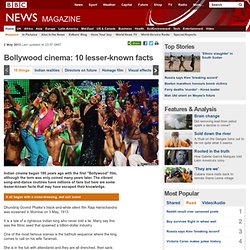 The vibrant song-and-dance routines have millions of fans but here are some lesser-known facts that may have escaped their knowledge. Dhundiraj Govind Phalke's black-and-white silent film Raja Harischandra was screened in Mumbai on 3 May, 1913. It is a tale of a righteous Indian king who never told a lie. World War II Code Used By British POW In Letters Home Cracked, Offering Rare Glimpse At MI9 History. Sandra Day O'Connor Doubts Decision To Take Bush V. Gore. Former Supreme Court Justice Sandra Day O'Connor expressed doubt Friday about the decision to take the 2000 Bush v. 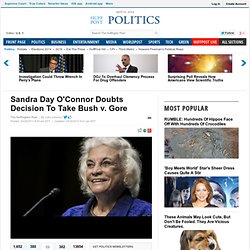 Gore case that resulted in the election of President George W. Bush. "It took the case and decided it at a time when it was still a big election issue," O'Connor told the Chicago Tribune editorial board in an interview. "Maybe the court should have said, 'We're not going to take it, goodbye.'" "Obviously the court did reach a decision and thought it had to reach a decision," she said.

The Florida Supreme Court ordered a manual recount on Dec. 8, 2000, of all Florida votes in the 2000 presidential election between Vice President Al Gore and Bush, then the governor of Texas. O'Connor, now 83, retired in 2006, and Bush replaced her with the substantially more conservative Justice Samuel Alito, an opponent of abortion rights, unlike O'Connor. Former Justice John Paul Stevens called the Bush appeal "frivolous" in his memoir. WWI prisoner of war postcard found. 28 April 2013Last updated at 22:41 ET The postcard was sent from Limburg an der Lahn in Germany on 30 April 1918 A postcard sent home by a captured WWI soldier has come to light 95 years after it was sent from a German prisoner of war camp. 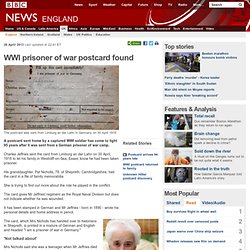 Charles Jeffries sent the card from Limburg an der Lahn on 30 April, 1918 to let his family in Westcliff-on-Sea, Essex, know he had been taken prisoner. His granddaughter, Pat Nicholls, 78, of Shepreth, Cambridgeshire, had the card in a file of family memorabilia.

'Hairdo archaeologist' solves ancient fashion mystery. 4 Things We Should Remember When Arguing About Politics. Political discourse in America has reached levels of douchebaggery previously only theorized about but never observed, like conversational dark matter. 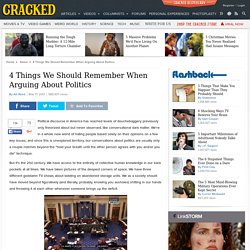 We're in a whole new world of hating people based solely on their opinions on a few key issues, and since this is unexplored territory, our conversations about politics are usually only a couple notches beyond the "hold your breath until the other person agrees with you and/or you die" technique. The Boston Marathon bomber: Caught on film? 17 April 2013Last updated at 21:37 ET By Kate Dailey BBC News Magazine. 1913: When Hitler, Trotsky, Tito, Freud and Stalin all lived in the same place. A century ago, one section of Vienna played host to Adolf Hitler, Leon Trotsky, Joseph Tito, Sigmund Freud and Joseph Stalin. In January 1913, a man whose passport bore the name Stavros Papadopoulos disembarked from the Krakow train at Vienna's North Terminal station.

Of dark complexion, he sported a large peasant's moustache and carried a very basic wooden suitcase. "I was sitting at the table," wrote the man he had come to meet, years later, "when the door opened with a knock and an unknown man entered. "He was short... thin... his greyish-brown skin covered in pockmarks... I saw nothing in his eyes that resembled friendliness. " BBC History - Titanic: By the men who built it. 18 April 2013Last updated at 16:04 In 1920 a Titanic memorial was erected in Belfast, the birthplace of the ship, "to the imperishable memory of those gallant Belfast men who lost their lives on 15th April 1912".

An anonymous poem published in the press at the time of the memorial offers a similar emphasis on the heroism of the Belfast men. This poem resonates with Belfast's own journey of association with Titanic from a feeling of initial shame to celebrating the ship and its memory. Here the words of the poem are put alongside images tracing a journey of more than 100 years. It focuses on the men who built Titanic, the ship itself, through to the new memorial unveiled in Belfast City's Hall last year to mark the centenary of the ship's sinking.

Continue reading the main story To see the enhanced content on this page, you need to have JavaScript enabled and Adobe Flash installed. All images subject to copyright. Slideshow production by Peter Crutchley and Alison Finch. Related: History - British History in depth: George III and History's Poisoned Well. Paris Louvre shuts as staff strike over pickpockets. 10 April 2013Last updated at 11:18 ET. Tortugas Shipwreck Treasure Trove Reveals Artifacts, Gold Bars From 400-Year-Old Spanish Galleon (PHOTOS) Deep sea archaeologists from the Florida-based Odyssey Marine Exploration have revealed a veritable treasure trove of important artifacts, loose pearls, gold bars and silver pieces recovered from the wreck of a 17th-century Spanish galleon resting 1,300 feet below the surface near the Florida Keys. The impressive finds were revealed last week in a set of archaeological reports gathered in a book called Oceans Odyssey 3, parts of which are currently available on the Odyssey website.

The papers document the estimated 17,000 artifacts originally recovered between 1990 and 1991 in the waters off the Dry Tortugas islands. According to the Odyssey Marine Exploration website, researchers studying the artifacts have now concluded that the "Tortugas" wreck "is likely the remains of the 117-ton Buen Jesus Nuestra Senor de Rosario, one of the vessels sailing with the 1622 Tierra Firme treasure fleet bound for Spain loaded with the wealth of the New World. " Loading Slideshow Also on HuffPost: Long-lost video of Martin Luther King killer James Earl Ray unearthed. 4 April 2013Last updated at 20:19 ET The film shows James Earl Ray being marched into a jail cell and later strip searched. DNA Letter Auction: Diagrams Francis Crick Sent To Son In 1953 Up For Auction In New York City. NEW YORK -- Sixty years ago scientist Francis Crick wrote a letter to his 12-year-old son saying he and a colleague had discovered something "very beautiful" – the structure of DNA.