Lorde Covers Nirvana With Joan Jett, Kim Gordon And Annie Clark. The Rock and Roll Hall of Fame inducted Nirvana on Thursday night, and after a few controversial "Who will sing with the band at the ceremony? 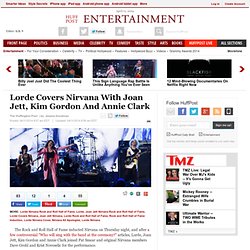 " articles, Lorde, Joan Jett, Kim Gordon and Annie Clark joined Pat Smear and original Nirvana members Dave Grohl and Krist Novoselic for the performance. Jett headed up "Smells Like Teen Spirit," Gordon sang "Aneurysm," Clark (of St. Giorgio Moroder Is Back, Thanks To Daft Punk. If two French robots hadn't coaxed him out of semi-retirement, Giorgio Moroder would still be practicing his swing somewhere on a Los Angeles golf course. 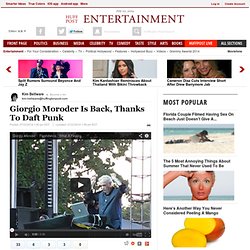 Instead, the 74-year-old Italian composer and record producer, credited with pioneering electronic dance music and crafting space disco hits like Donna Summer's "Hot Stuff," is back on the scene as a DJ. A few hours before his hugely anticipated headlining appearance at the Pitchfork Music Festival in Chicago on July 18, the Oscar and Grammy winner told The Huffington Post that it's the audience who inspires his energy. Led Zeppelin unleash unheard recordings. 23 April 2014Last updated at 02:49 ET By Rebecca Jones Arts correspondent, BBC News The band broke up in 1980 following the death of drummer John Bonham (second from right) Legendary rock group Led Zeppelin have unveiled two previously unheard recordings ahead of the reissue of the band's first three albums in June. 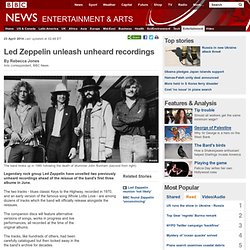 The two tracks - blues classic Keys to the Highway, recorded in 1970, and an early version of the famous song Whole Lotta Love - are among dozens of tracks which the band will officially release alongside the reissues. The companion discs will feature alternative versions of songs, works in progress and live performances, all recorded at the time of the original albums. The tracks, like hundreds of others, had been carefully catalogued but then locked away in the the band's archive for decades.

Culture - What makes the ‘song of summer’? From the Beach Boys in the 1960s to Pharrell Williams today, each year has its song of the summer. 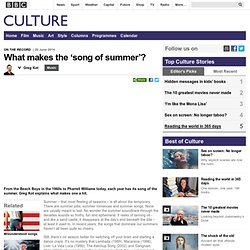 Greg Kot explains what makes one a hit. Summer – that most fleeting of seasons – is all about the temporary. There are summer jobs, summer romances and summer songs. None are usually meant to last. No wonder the summer soundtrack through the decades sounds so frothy, fun and ephemeral. Still, there’s no season better for switching off your brain and starting a dance craze.

In the ‘60s, pop built a micro industry around the notion that kids had even more leisure time in the summer and needed a soundtrack for it. Mungo Jerry gave the formula a twist in 1970 with In the Summertime by improbably turning an old-timey skiffle beat into a stoner beach-party shuffle. Neil Young-endorsed music player Kickstarts past $1.6 million. Saying that he wants to "bring back real music," rocker Neil Young unveiled the PonoPlayer yesterday. 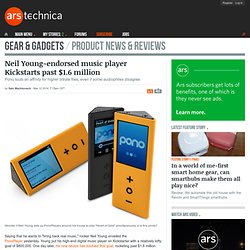 Young put his high-end digital music player on Kickstarter with a relatively lofty goal of $800,000. One day later, his new device has doubled that goal, rocketing past $1.6 million. The device is aptly described on Pono's page as a "Toblerone shape," looking about as long as an adult hand and reportedly weighing 4.5 ounces. It's packed with 64GB of on-board memory, along with a 64GB SD card. A small touchscreen, three physical buttons, and two 3.5 mm audio-out jacks round out the rest of the device.

The campaign includes an 11-minute video of Young-era musicians like Patti Smith, Tom Petty, and David Crosby asserting how much "better" music can sound on a PonoPlayer. What won't be music to Young's ears is the growing crowd of audiophiles who aren't convinced that higher bitrates alone do the trick. Either way, $1.6 million has fallen into the laps of Young and co. Non-Newtonian Fluids Rock Out As Stars Of Jack White's New Music Video. Stairway to Heaven Spirit Lawsuit: Led Zeppelin Loses First Round. Jessa Seewald and Jill Dillard say their parents used “safeguards” to protect them from their brother, Josh Duggar, after he molested them as well as two of their sisters when they were young. 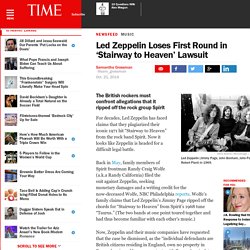 After the incidents, their parents, 19 Kids and Counting stars Jim Bob and Michelle Duggar, talked to their 19 children about “not being alone,” Jill, 24, told Megyn Kelly Friday on Fox News’ The Kelly File. “My parents said, ‘Okay, we’re not going to do this hide-and-seek thing where two people go off and hide together,’ ” the new mom explained. Their parents put “locks on the doors,” said Jill. “You know, everybody’s in bed. Girls in the girls’ room. Jim Bob told Kelly on Wednesday that after Josh confessed at 14 that he had “improperly touched his sisters” while they were sleeping,” that he and his wife put “safeguards” into place to try to prevent him from doing it again.

Jessa, 22, said she and her sister wanted to come forward to talk about what their brother had done to them.