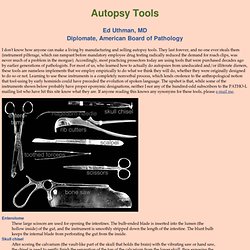 They last forever, and no one ever steals them (instrument pilferage, which ran rampant before mandatory employee drug testing radically reduced the demand for roach clips, was never much of a problem in the morgue). Accordingly, most practicing prosectors today are using tools that were purchased decades ago by earlier generations of pathologists. For most of us, who learned how to actually do autopsies from uneducated and/or illiterate dieners, these tools are nameless implements that we employ empirically to do what we think they will do, whether they were originally designed to do so or not. Learning to use these instruments is a completely nonverbal process, which lends credence to the anthropological notion that tool-using by early hominids could have preceded the evolution of spoken language. 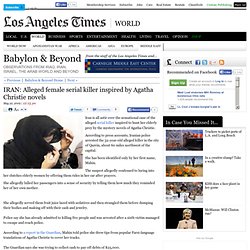 According to press accounts, Iranian police arrested the 32-year-old alleged killer in the city of Qazvin, about 60 miles northwest of the capital. She has been identified only by her first name, Mahin. The suspect allegedly confessed to luring into her clutches elderly women by offering them rides in her car after prayers. She allegedly lulled her passengers into a sense of security by telling them how much they reminded her of her own mother. She allegedly served them fruit juice laced with sedatives and then strangled them before dumping their bodies and making off with their cash and jewelry. Police say she has already admitted to killing five people and was arrested after a sixth victim managed to escape and reach police. The Guardian says she was trying to collect cash to pay off debts of $25,000. -- Borzou Daragahi in Beirut. Serial killer murders 4 women in Iran. Luis Garavito - Monstropedia - the largest encyclopedia about mo. Luis Garavito, aka. 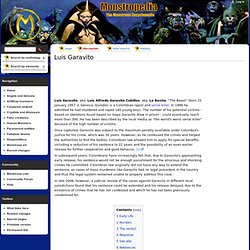 Luis Alfredo Garavito Cubillos, aka. La Bestia, "The Beast" (born 25 January 1957 in Génova, Quindío) is a Colombian rapist and serial killer. In 1999 he admitted he had murdered and raped 140 young boys. The number of his potential victims - based on skeletons found based on maps Garavito drew in prison - could eventually reach more than 300. He has been described by the local media as "the world's worst serial killer" because of the high number of victims. Once captured, Garavito was subject to the maximum penalty available under Colombia's justice for his crime, which was 30 years.

In subsequent years, Colombians have increasingly felt that, due to Garavito's approaching early release, his sentence would not be enough punishment for the atrocious and shocking crimes he committed. Early Life Luis Alfredo Garavito was born on January 25, 1957 in Génova, Quindío (Colombia). Murders The verdict Luis Alfredo Garavito was captured on 22 April, 1999. Response See also. Tueursenserie.org.