Modern Literature (1900-1961) The Modern Age in English Literature started from the beginning of the twentieth century, and it followed the Victorian Age. 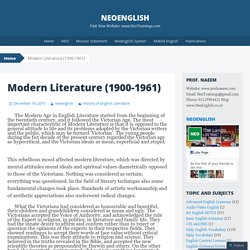 The most important characteristic of Modern Literature is that it is opposed to the general attitude to life and its problems adopted by the Victorian writers and the public, which may be termed ‘Victorian’. The young people during the fist decade of the present century regarded the Victorian age as hypocritical, and the Victorian ideals as mean, superficial and stupid. This rebellious mood affected modern literature, which was directed by mental attitudes moral ideals and spiritual values diametrically opposed to those of the Victorians. Nothing was considered as certain; everything was questioned. In the field of literary technique also some fundamental changes took place. Literature Glossary. Definition: Fair warning, fair Shmoopers: this one's a doozy. 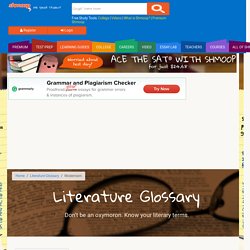 The word modern has a whole boatload of different meanings, and what constitutes modernism has been hotly debated for decades. Let's start at the beginning, shall we? Some scholars argue that the world became modern just after the Medieval period, right around the time Europe came out of feudalism. Some argue that the modern world started with the Enlightenment, when thinkers like John Locke revolutionized the world, and reason took a firm hold on public thinking. To keep things simple, Shmoop's gonna go with the last group. In fact, you might say that World War I is the hub around which the whole modernist wheel turned.

See, the world wasn't quite the same anymore, and writers and artists were struggling to find new ways to create art that reflected those big changes. Writers chucked linear narratives and chronology out the window in favor of confusing stories that jumped around. Famous modernist writers include T.S. Modernism - Literature Periods & Movements. Literature Network » Literary Periods » Modernism The Modernist Period in English Literature occupied the years from shortly after the beginning of the twentieth century through roughly 1965. 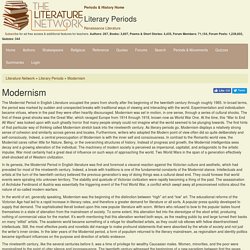 In broad terms, the period was marked by sudden and unexpected breaks with traditional ways of viewing and interacting with the world. Experimentation and individualism became virtues, where in the past they were often heartily discouraged. Modernism was set in motion, in one sense, through a series of cultural shocks. The first of these great shocks was the Great War, which ravaged Europe from 1914 through 1918, known now as World War One. Modern Art - Modern Art Terms and Concepts. Modern art represents an evolving set of ideas among a number of painters, sculptors, writers, and performers who - both individually and collectively - sought new approaches to art making. 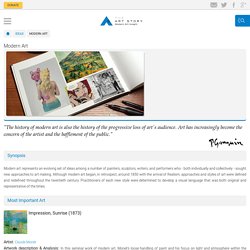 Although modern art began, in retrospect, around 1850 with the arrival of Realism, approaches and styles of art were defined and redefined throughout the twentieth century. Practitioners of each new style were determined to develop a visual language that was both original and representative of the times. Impression, Sunrise (1873) Artist: Claude Monet Artwork description & Analysis: In this seminal work of modern art, Monet's loose handling of paint and his focus on light and atmosphere within the landscape scene are all key characteristics of Impressionism, which is widely considered the first fully modern movement. Read More The Large Bathers (1898-1906) Artist: Paul Cézanne Les Demoiselles d'Avignon (1907) Artist: Pablo Picasso. Modernism. Modernism, “Dynamism of a Dog on a Leash”Collection Albright-Knox Art Gallery, Buffalo, New York; bequest of A. 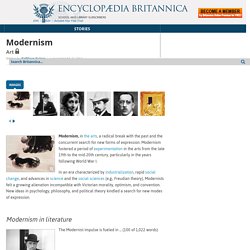 Conger Goodyear and Gift of George F. Goodyear, 1964in the arts, a radical break with the past and the concurrent search for new forms of expression. Modernism fostered a period of experimentation in the arts from the late 19th to the mid-20th century, particularly in the years following World War I. In an era characterized by industrialization, rapid social change, and advances in science and the social sciences (e.g., Freudian theory), Modernists felt a growing alienation incompatible with Victorian morality, optimism, and convention. Conrad, Joseph© Bettmann/CorbisThe Modernist impulse is fueled in ... (100 of 1,022 words)

Modern Art: History, Characteristics, Movements. What were the Origins of Modern Art? 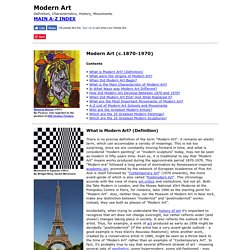 To understand how "modern art" began, a little historical background is useful. The 19th century was a time of significant and rapidly increasing change. As a result of the Industrial Revolution (c.1760-1860) enormous changes in manufacturing, transport, and technology began to affect how people lived, worked, and travelled, throughout Europe and America. Towns and cities swelled and prospered as people left the land to populate urban factories.

These industry-inspired social changes led to greater prosperity but also cramped and crowded living conditions for most workers. In addition, two other developments had a direct effect on fine art of the period. As well as affecting how artists created art, 19th century social changes also inspired artists to explore new themes. The 19th century also witnessed a number of philosophical developments which would have a significant effect on art. When Did Modern Art Begin? In What Ways was Modern Art Different?