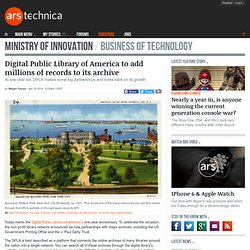 To celebrate the occasion, the non-profit library network announced six new partnerships with major archives, including the US Government Printing Office and the J. Paul Getty Trust. The DPLA is best described as a platform that connects the online archives of many libraries around the nation into a single network. You can search all of these archives through the digital library's website, and developers can build apps around the DPLA's metadata collection using the publicly available API. It's easy to find historical documents, public domain works, and vintage photos online through a search on the DPLA's website. The fledgling library said today that one of its early partners, the New York Public Library, agreed to expand access to its digital collections in the coming year.

In addition, the DPLA announced partnerships with the California Digital Library, the Connecticut Digital Archive, the J. Asprox Botnet Reemerges in the Form of KULUOZ. Botnets are one of the most effective means for cybercriminals to distribute malware and generate profit from unsuspecting users. 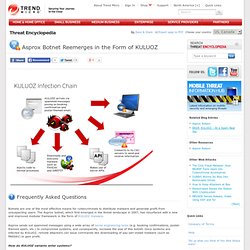 The Asprox botnet, which first emerged in the threat landscape in 2007, has resurfaced with a new and improved modular framework in the form of KULUOZ malware. Asprox sends out spammed messages using a wide array of social engineering lures (e.g. booking confirmations, postal-themed spam, etc.) to compromise systems, and consequently, increase the size of this botnet. Once systems are infected by KULUOZ, remote attackers can issue commands like downloading of pay-per-install malware (such as FAKEAV) to gain profit. 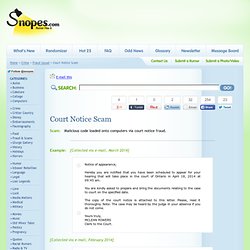 Example:[Collected via e-mail, March 2014] Notice of appearance, Hereby you are notified that you have been scheduled to appear for your hearing that will take place in the court of Ontario in 2014 at You are kindly asked to prepare and bring the documents relating to the case to court on the specified date. The copy of the court notice is attached to this letter. Yours truly, MCLEAN POWERS Clerk to the Court. [Collected via e-mail, February 2014] Eviction notification, Heartbleed Bug: Public urged to reset all passwords. 9 April 2014Last updated at 10:34 ET By Leo Kelion Technology desk editor Users are warned that the flaw may have exposed passwords and sensitive data Several tech firms are urging people to change all their passwords after the discovery of a major security flaw. 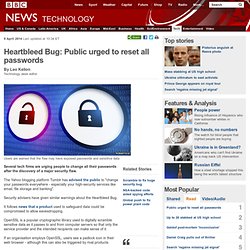 The Yahoo blogging platform Tumblr has advised the public to "change your passwords everywhere - especially your high-security services like email, file storage and banking". Security advisers have given similar warnings about the Heartbleed Bug. It follows news that a product used to safeguard data could be compromised to allow eavesdropping. OpenSSL is a popular cryptographic library used to digitally scramble sensitive data as it passes to and from computer servers so that only the service provider and the intended recipients can make sense of it.

If an organisation employs OpenSSL, users see a padlock icon in their web browser - although this can also be triggered by rival products. Copied keys. Huge hack 'ugly sign of future' for internet threats. 11 February 2014Last updated at 08:43 ET By Dave Lee Technology reporter, BBC News The attack exploited a fundamental vulnerability in a system used to synchronise computer clocks A massive attack that exploited a key vulnerability in the infrastructure of the internet is the "start of ugly things to come", it has been warned. 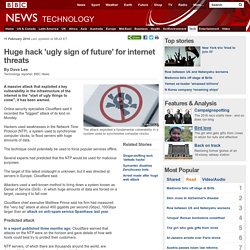 Online security specialists Cloudflare said it recorded the "biggest" attack of its kind on Monday. Hackers used weaknesses in the Network Time Protocol (NTP), a system used to synchronise computer clocks, to flood servers with huge amounts of data. The technique could potentially be used to force popular services offline. Several experts had predicted that the NTP would be used for malicious purposes.

The target of this latest onslaught is unknown, but it was directed at servers in Europe, Cloudflare said. Predicted attack NTP servers, of which there are thousands around the world, are designed to keep computers synchronised to the same time. “Start Quote 'Ugly future'