Tracey Thorn, musician and writer, is interviewed by Lauren Laverne. 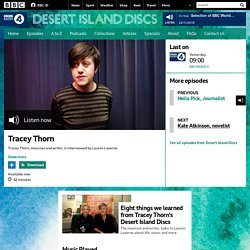 Tracey Thorn, musician and writer, is best known as one half of the duo Everything but the Girl. Brought up in Brookmans Park, Hertfordshire, she bought her first guitar, a black Les Paul copy, when she was 16 and her first band was called the Stern Bobs. Shortly after, she formed her own all-female band, Marine Girls, before moving to Hull University to study English. On her first night there, she met her future husband, Ben Watt, and they went on to form Everything But the Girl. Between 1982 and 2000, they sold more than nine million records and toured Europe and America. At 35 she left the pop world to look after her twin girls, who were followed by her son Blake.

This year Tracey was presented with the outstanding contribution to music prize, at the AIM independent music awards. BBC World Service - Outlook, Living with misophonia. BBC 100 Women Interviews 22/11/2018 Isabel Allende. Pamela Meyer: How to spot a liar. Layla Moran's speech to Liberal Democrat Conference September 2017. It was night, and some fireflies danced around the moon. - ppt video online download. BBC Radio 4 - The Tyranny of Story, Episode 1. Richard Turere: My invention that made peace with lions.

Christoph Niemann: You are fluent in this language (and don't even know it) These Kids Have Bright Ideas About Idioms. How Donald Trump Answers A Question. The Beautiful Lies of Sound Design. Why we should take laughter more seriously. Radio Diaries Radio Diaries - People documenting their lives on NPR. Monica Byrne: A sci-fi vision of love from a 318-year-old hologram.

The beauty of strangers. Sophie Scott: Why we laugh. BBC Radio 4 - Short Cuts, Series 15, Cinema. Amy Chua – Think Again - a Big Think Podcast #137 – U.S. and Them. Subscribe on Google Play, Stitcher, or iTunes Come talk to us on Twitter: @bigthinkagain I don’t know about you, but for me, middle school was horrible. 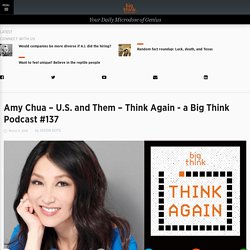 I arrived at an all-male school in a still very homophobic era as a small, nervous, Michael Jackson fanatic. Don’t worry - I’m going somewhere with this. For three years, life was hell. My guest today is Yale Law professor Amy Chua, who shook the Internet up a few years back with her book BATTLE HYMN OF THE TIGER MOTHER. In her powerful new book POLITICAL TRIBES: GROUP INSTINCT AND THE FATE OF NATIONS, Amy points out that long past high school, group instinct is much stronger than Americans generally like to admit. Surprise conversation-starter clips in this episode: Michael Norton on the link between money and happiness, Derek Thompson on “coolness” About Think Again - A Big Think Podcast: Since 2008, Big Think has been sharing big ideas from creative and curious minds.

Erin McKean: The joy of lexicography. Anne Curzan: What makes a word "real"? Can ANNIHILATION Capture the Weirdness of the Book? BBC Radio 5 live - In Short, The Lack of Her: A poem by Jardell Rodrigues. BBC Radio 5 live - In Short, [Untitled]: A poem by Billie Meredith. BBC Radio 5 live - In Short, Bakes and Corn Beef: A poem by Toreh O'Garro. BBC Radio 4 - Laura Barton's Notes from a Musical Island. The Enchanting Music of Sign Language. Two Deaf Women Show Us Bilingualism At Its Finest. NYC sign language star surprised by fame. Best sign language interpreter ever! - Hurricane Matthew. Recreational research radio by recrea33. Parsnips, Buttered. Cathy FitzGerald. Unbelievable! #BrentDelta right here in Teeside. I'm finding out for @bbc5live exactly how it'll be recycled. Emma Watson & Caitlin Moran - In Conversation for Our Shared Shelf. BBC Radio 4 - Book of the Week, How to Be Champion, I've Had Proper Jobs.

Majd kept a journal about a time in her life when she was torn between getting married or going to school. 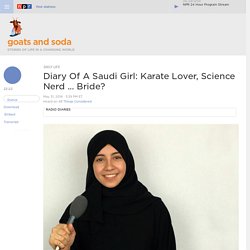 Courtesy of Madj hide caption toggle caption Courtesy of Madj Majd kept a journal about a time in her life when she was torn between getting married or going to school. Courtesy of Madj Majd Abdulghani is a young woman from Riyadh, Saudi Arabia, who dreams of becoming a scientist — while her parents hope to arrange her marriage. Meet The Abdulghanis Hello. Ring ring ring! That's my alarm. It's 6:45. Ichi, Ni, San, Shi... OK, I'm done.

I'm going to introduce my family to you, and you to my family. Knock knock. "Hi Mohammed. "Work is great," he says. I have four brothers. Now I'm passing the family sitting room. "What are you eating? He nods. My mom is here. Martin Luther King, Jr. I Have A Dream Speech. Sophie Scott: Why we laugh. Interview with Simone de Beauvoir Studs Terkel Radio Archive Blog. Audiobook Torrent Downloads, Free Unabridged Audio Books. Lutheran Minister Preaches A Gospel Of Love To Junkies, Drag Queens And Outsiders. Lutheran Pastor Nadia Bolz-Weber says that all are welcome at her Denver church, The House for All Sinners and Saints. 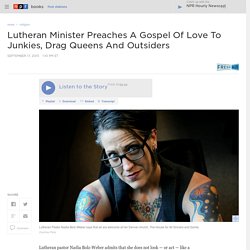 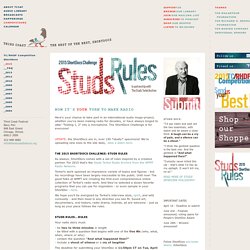 The ShortDocs Challenge is for everyone! UPDATE: the ShortDocs are in, over 150 *studly* specimens! We're uploading new ones to the site daily, take a listen here. The 2015 ShortDocs Challenge: STUDS RULES As always, ShortDocs comes with a set of rules inspired by a creative partner. Terkel's work spanned an impressive variety of topics and figures - but his recordings have been largely inaccesible to the public.

We hope you'll be energized by Terkel's interview style, spirit, and wild curiousity - and then head in any direction you see fit. Studs rules...rules. The WFMT Studs Terkel Radio Archive. Radio 4 The Listening Project - Home. StoryCorps.