The Programmed Music of “Mini Metro” – Interview with Rich Vreeland (Disasterpeace) As art of the Audio Programming theme this month, I thought it would be interesting to learn about the interactive/reactive score to Mini Metro, a game which was released late last year by developer Dinosaur Polo Club to broad critical acclaim. 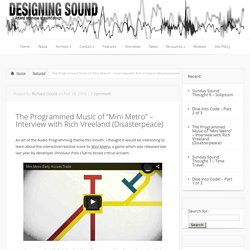 The Otherworldly Sounds of No Man's Sky - IGN First. Procedural audio with Unity. AudioGaming offers an advanced tutorial on procedural audio, using HolyShield as a case study In the video games world procedural audio refers to the computational process of generating audio from nothing, or almost nothing. 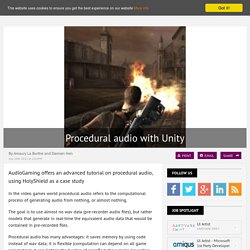 The goal is to use almost no wav data (pre-recorder audio files), but rather models that generate in real-time the equivalent audio data that would be contained in pre-recorded files. Procedural audio has many advantages: it saves memory by using code instead of wav data; it is flexible (computation can depend on all game parameters); it can lighten the burden of specific tedious tasks (sounding hundreds of interacting objects or animations) and it brings flexibility to the pipeline (since sound is directly linked to game parameters, changes will modify audio generation accordingly to keep it synced, avoiding the need for sound re-design). Leonard J Paul – Working and Playing with Procedural Audio - Procedural Audio Now!

It was a pleasure to welcome procedural audio pioneer, Leonard Paul, to February’s meetup! 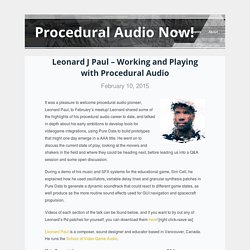 Leonard shared some of the highlights of his procedural audio career to date, and talked in depth about his early ambitions to develop tools for videogame integrations, using Pure Data to build prototypes that might one day emerge in a AAA title. He went on to discuss the current state of play, looking at the movers and shakers in the field and where they could be heading next, before leading us into a Q&A session and some open discussion. During a demo of his music and SFX systems for the educational game, Sim Cell, he explained how he used oscillators, variable delay lines and granular synthesis patches in Pure Data to generate a dynamic soundtrack that could react to different game states, as well produce as the more routine sound effects used for GUI navigation and spacecraft propulsion.

Leonard Paul is a composer, sound designer and educator based in Vancouver, Canada. Presentation slides. What’s The Deal With Procedural Game Audio? Guest contribution by Martin Roth We’ve all heard of the promises of procedural game audio. 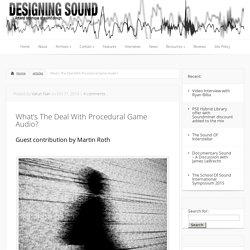 A veritable Valhalla where sounds are created out of thin air, driven by the game engine, eliminating the need for huge sample libraries and tedious recording. Sounds great! So why aren’t we hearing more of it in games today? We’ve all experienced Rockstar’s work in GTA 5; those bicycles sure do sound great! The hard truth is that while the idea is great in theory, no one knows what they’re doing in practice. For the purposes of this article the terms procedural, generative, and interactive as they relate to sound and composition will be used interchangeably. Scarce Design Resources. PANow Oct 2nd Heavy. Procedural Audio Now! Procedural audio with Unity. Sound synthesis for impact sounds in video games. 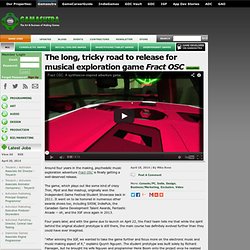 The game, which plays out like some kind of crazy Tron, Myst and Rez mashup, originally won the Independent Game Festival Student Showcase back in 2011. It went on to be honored in numerous other awards shows too, including SXSW, IndiePub, the Canadian Game Development Talent Awards, Fantastic Arcade -- oh, and the IGF once again in 2013.

Four years later, and with the game due to launch on April 22, the Fract team tells me that while the spirit behind the original student prototype is still there, the main course has definitely evolved further than they could have ever imagined. "After winning the IGF, we wanted to take the game further and focus more on the electronic music and music-making aspect of it," explains Quynh Nguyen. "There were so many times that we didn't feel like we would ever finish, or at least, make it until the end. " Procedural Audio Generator for Unity3D. GameAudio Podcast – Episode #37 – Games That Use Music As A Gameplay Mechanism » Gameaudio Podcast. Guests: Matthew Burns – Shade Grown Games Samantha Kalman – Sentris Shaw-Han Liem – Robot and Proud. 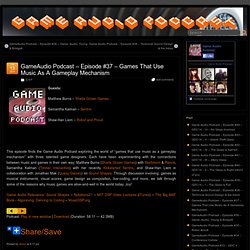 Neu! “We wanted to make a racing game in which the track is being built while you’re playing,” says Mario von Rickenbach of his game Krautscape’s “formative stages” (pun firmly intended). 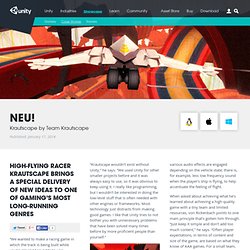 “We thought about different ways to do this, but after a first quick prototype it was clear which way we would go.” They quickly realized the beauty of the player leading the race determining where the track would lead; it proved almost immediately fun, and the team started to build the gameplay around this core idea by designing different game modes that fit into it.

A flying mechanic was introduced shortly thereafter, which helped mitigate the confusion that came from players not knowing where they were going. Krautscape Trailer 2. The Generative Music and Procedural Sound Design of Sim Cell. Gamasutra-Jun2003/Gamasutra-PrototypingWithPureData-LPaul-Paper-May2003.pdf.