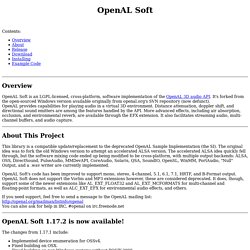 It's forked from the open-sourced Windows version available originally from openal.org's SVN repository (now defunct). OpenAL provides capabilities for playing audio in a virtual 3D environment. Distance attenuation, doppler shift, and directional sound emitters are among the features handled by the API. About This Project This library is a compatible update/replacement to the deprecated OpenAL Sample Implementation (the SI). OpenAL Soft's code has been improved to support mono, stereo, 4-channel, 5.1, 6.1, 7.1, HRTF, and B-Format output. If you need support, feel free to send a message to the OpenAL mailing list: You can also ask for help in IRC, #openal on irc.freenode.net OpenAL Soft 1.17.2 is now available!

Download. MNTN. Binaural microphones and dummyheads - Blog de François Becker. Here is a list of binaural recording hardware, either to be worn by someone, or as standalone devices. 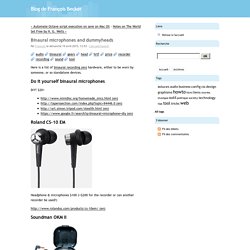 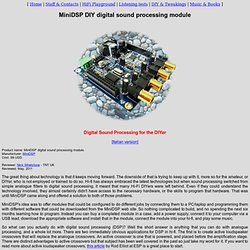 Manufacturer: MiniDSP Cost: 99 USD. Reviewer: Nick Whetstone - TNT UK Reviewed: May, 2011 The great thing about technology is that it keeps moving forward. MiniDSP's idea was to offer modules that could be configured to do different jobs by connecting them to a PC/laptop and programming them with different software that could be downloaded from the MiniDSP web site. High Resolution Music DOWNLOAD services .:. FLAC in free TEST BENCH. HiRes Download - test bench We invite you to join us in this evaluation of future consumer delivery formats. 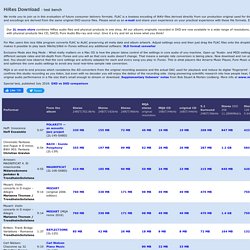 Technique : Recording / Mixing Everyone knows how much a classy vocal sound can add to any recording, but achieving this in the studio can seem something of a black art, so this month we demystify the recording, processing, and mixing techniques required to produce professional results. 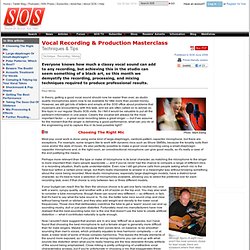 Paul White In theory, getting a good vocal sound should now be easier than ever, as studio quality microphones seem now to be available for little more than pocket money. However, we still get lots of letters and emails at the SOS office about problems that musicians are encountering with this task, and we are often called on to advise on this topic in our regular Studio SOS visits. So I felt it would be valuable to put all the pertinent information in one place. Dan Hemingson's site related to an experimental ambisonic microphone. Raspberry Pi into an audio spying device. If you are a spy or work for the CIA or the FBI, this will come in handy in your knowledge. 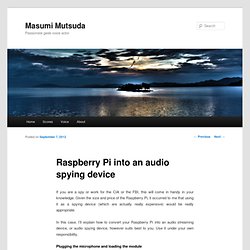 Given the size and price of the Raspberry Pi, it occurred to me that using it as a spying device (which are actually really expensive) would be really appropriate. In this case, I’ll explain how to convert your Raspberry Pi into an audio streaming device, or audio spying device, however suits best to you. Use it under your own responsibility. Plugging the microphone and loading the module The Raspberry Pi has an audio output jack, but unfortunately there is no input port. (or plug a webcam with microphone). Once the microphone is plugged in, you might have to load the audio module by typing the following command if it isn’t. sudo modprobe snd_bcm2835 Recording and playing a test file. Musicgallery.it. Text to Speech, Speech Recognition, Email Address Searcher Software Free Download. Downloads Power Email Harvester Size: 1.38MB Runs on: Windows 95/98/ME/2000/NT/XP/Vista computers Download from our yesgoal.com Download from iemailworld.com. 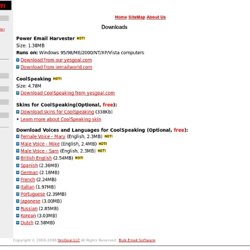 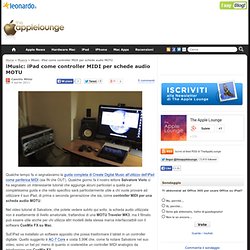 Recording and Measurement Microphones. Recording and Measurement MicrophonesRod Elliott (ESP) PCBs for the discrete mic preamp and a complete housing are available - click on the image for details (New PCB available) Introduction The purpose of this article and small group of projects is firstly to introduce the electret microphone into the ESP projects lineup, and secondly to allow the reader to build a microphone that although uncalibrated, can be used to great effect as a measurement mic with any loudspeaker project, or for very high quality recordings. 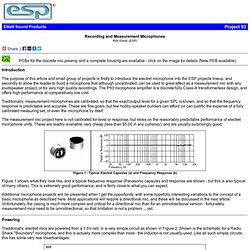 The P93 microphone amplifier is a discrete fully Class-A transformerless design, and offers high performance at comparatively low cost. Traditionally, measurement microphones are calibrated, so that the exact output level for a given SPL is known, and so that the frequency response is predictable and accurate. The measurement mic project here is not calibrated for level or response, but relies on the reasonably predictable performance of electret microphone units.