Magneticmag. You've been into electronic music a LOT longer than you think; that is if you were playing 8bit video games like Atari and Nintendo back in the day. 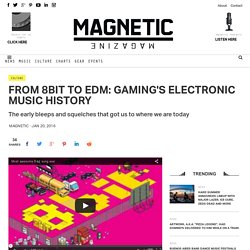 Yeah, PacMan was kind of like really early techno if you think about it. Aside from early analog synths, video game tracks were some of the first mass marketed and consumed forms of electronic music. The songs were stored in chips in those game cartridges that we popped in and out of consoles like little gaming psycho chimps hopped up on Mountain Dew. This experience is where many of us heard our first squelches, bleeps, and rudimentary ambient music for the first time and we couldn't have cared less, just as long as we didn't lose a "guy. " NES Audio: Brief Explanation of Sound Channels. How Oldschool Sound/Music worked. Compositional Strategies For Programmable Sound Generators With Limited Polyphony - Ludomusicology.

We are proud to publish the following article by Blake Troise (ThinkSpace, ProtoDome) as part of our contributor articles series. 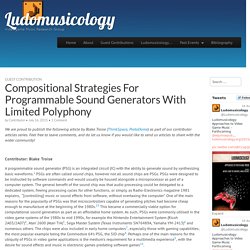 Feel free to leave comments, and do let us know if you would like to send us articles to share with the wider community! ‘Bleeps And Blops’ No More: Video Game Music’s Evolution. The arcade sound that accompanied the earliest video games more than three decades ago is as antiquated as “Pac-Man.” 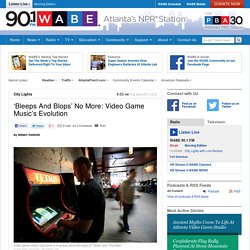 While Atari, a video game pioneer, has released an updated version of its classic 1980s joystick, the soundtracks packaged with today’s hottest gaming products have no throwback quality to them at all. Video game composers are quietly doing something incredible. Public radio isn’t known as a hub for video game coverage. 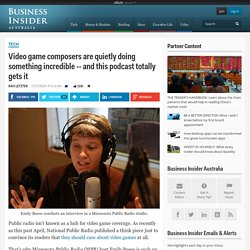 As recently as this past April, National Public Radio published a think piece just to convince its readers that they should care about video games at all. That’s why Minnesota Public Radio (MPR) host Emily Reese is such an anomaly. Reese has two professional passions: classical music and video game scores. Classical music, of course, is a staple of the public radio universe. “Top Score,” Reese’s video game music podcast, is an exception. Video game composers are often unknowns in the music world, choosing to hammer away for years on melodies to match the unique, interactive experience of gaming. When you think about writing music for media, video games are pretty much the only time it gets interactive. 10 Inventions that Changed the History of Game Sound. Karen Collins is a sound designer and author of several books on game audio. 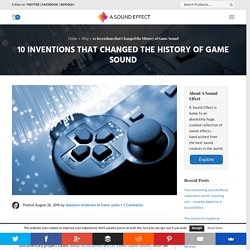 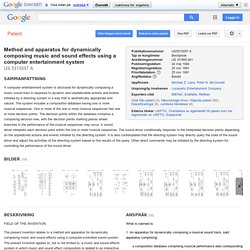 The present invention applies to, but is not limited to, a music and sound effects system in which music and sound effect composition is related to an interactive computer/video game and is dynamically composed in response to unpredictable action and events of the game and in which the changes occur in a way that is aesthetically appropriate and natural. The present invention may also be used in any other situation where dynamic music composition may be of benefit, including but not limited to live theater or musical performance, interactive computer education products, composition tools for quickly assembling soundtracks to accompany visual media, etc. Although it may potentially be used in many other applications, the present invention was created in response to a need in the computer/video games industry.

Extra Credits: Video Game Music. Brett Apitz. This is just the beginning of my look at the sounds in the NES Mega Man games. 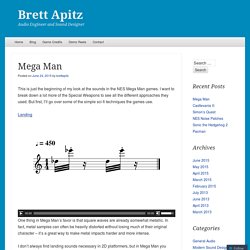 I want to break down a lot more of the Special Weapons to see all the different approaches they used. How Video Games Changed Popular Music. There was a time when video games, much like the tiny computers that powered them, seemed like a passing fad. 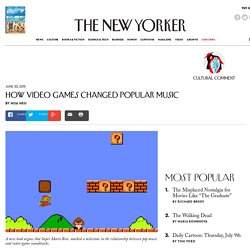 In the late seventies, millions of young people flocked to arcades for all the flashing colors and fantastical worlds, for unprecedented feelings of authorship and control. To skeptics, however, arcades could be deeply annoying places, in part because of their noise and hectoring sounds, which served little purpose beyond “hailing” passersby. But Koji Kondo, a Japanese fan of progressive rock and jazz exploring his post-collegiate plans, heard something different. He went to arcades because he liked the way they sounded. NES Audio: Brief Explanation of Sound Channels. Jesus Fabre's Blog - Interviewing veteran composer Barry Leitch (Part I). Sound chips (from ZX-81 to the SNES). Interviewing veteran composer Barry Leitch (Part I). 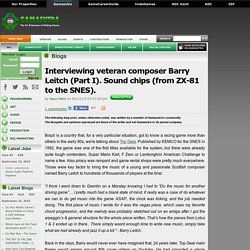 Sound chips (from ZX-81 to the SNES). The following blog post, unless otherwise noted, was written by a member of Gamasutra’s community. The thoughts and opinions expressed are those of the writer and not Gamasutra or its parent company. Brazil is a country that, for a very particular situation, got to know a racing game more than others in the early 90s, we're talking about Top Gear. Published by KEMCO for the SNES in 1992, the game was one of the first titles available for the system, but there were already quite tough contenders, Super Mario Kart, F Zero or Lamborghini American Challenge to name a few. The History of Video Gaming Consoles - Full. Sega Mega Drive / Genesis Music.

From the Expert – MODs and the DemoScene. Music has many forms, and music production has probably at least as many forms as well. 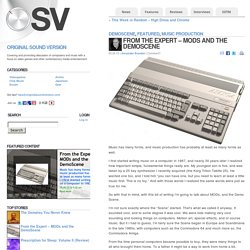 I first started writing music on a computer in 1987, and nearly 30 years later I realized how important simple, fundamental things really are. My youngest son is five, and was taken by a 25 key synthesizer I recently acquired (the Korg Triton Taktile 25). He wanted one too, and I told him “you can have one, but you need to learn at least a little music first. This is no toy.” And with those words I realized the same words were just as true for me. So with that in mind, with this bit of writing I’m going to talk about MODs, and the Demo Scene.

RetroGameGeeks. Diggin’ In The Carts: Episode 1 - The Rise of VGM. RBMA presents Diggin' In The Carts (Series Trailer) ​The Five Best Game Songs Most People Haven't Heard. 10 Inventions that Changed the History of Game Sound. The Secret History of Videogames & The Military. Top 15 Amiga 500 Games renowned for their music. If you were an 80s or 90s kid and old enough to be gaming at the time, you should remember the Commodore Amiga. The iconic Amiga 500, It was a personal computer way ahead of its time. And when I say a PC, well it was used mostly as a gaming machine due to its advanced graphics and sound. It was a true multimedia machine and maybe even the first. What really made the Amiga 500 and its successors like the Amiga 500+ stand out was the music this computer could produce. Arguably, it had one of the best, if not the best sound outputs of the time, whereas other machines and game consoles still had bleep and beeps.

The Evolution of Video Game Music. Is a Silent Protagonist a Better Protagonist? ‹ Hardcore Gamer. Matt Powers's Blog - A Brief History of Video Game Development. The following blog post, unless otherwise noted, was written by a member of Gamasutra’s community. The thoughts and opinions expressed are those of the writer and not Gamasutra or its parent company. Recently an iOS game was released called Star Trux. The game itself is really good but what is most fascinating about Star Trux is the 35-year story of its making. In the 1970's a small group of people formed a company called Authorship Resource Inc. This company designed and created the hardware and software for the CyberVision.

ARI was founded by John Powers (my Dad) and Joe Miller in 1977. Cybervision 2001 ad (around 1978) I remember as a kid, playing one of the first games my dad made for the Cybervision. Unfortunately, CyberVision had manufacturing problems and was not successful. Audible Worlds - Game Audio Archive. What makes a sound memorable? Maybe it's unique or maybe it's constant repetition. Whatever it is there are reasons why we remember sounds and why they live on to form nostalgia. I was curious about game sounds in particular. There are a good bunch of sounds that everyone seems to recall as either "iconic", "memorable" or "classic". In my research it appears that most people start listing sounds from the 90's back.

In Atari’s game tunes, echoes of medieval angst - Music. History - Digital Sound and Music in Computer Games. [ show navigation bar ] From mechanical machines to large-scale electronic devices. At the beginning of the 20th century, numerous coin-operated games gained popularity. In 1930, a game called BAFFLE BALL was manufactured by Gottlieb & Company which would become the predecessor of all modern pinball games – a term coined only in 1936. Along with slot machines, these devices pioneered in delivering artificially generated sounds, whereas all prior machines had been mostly mechanical in nature (e.g. table-football games) and were hardly producing any sounds – or rather noises – other than those caused by the sheer operation of the controls by the players or ball collisions.

The one-day summit — a small part of the 5th annual Gamercamp weekend — focused on discussions about design and innovation in digital, interactive, and game media, and brought together a mix of game developers, filmmakers, interactive designers, digital creatives, artists, hobbyists, and more. “In the Loop: Confinements and Creativity in 8-Bit Video Games Music.”

This document covers most of what I know. Retro Game Audio. Can you explain what it means, exactly, for music to be “8-bit?” What significance does the number of bits have for waveforms, channels, sample size/quality, volume, speed, etc? A personal history of game music: Part 2 – The NES. After the Spectrum came the NES (or Nintendo Entertainment System for those who really enjoy syllables), a revolution that brought gaming out of arcades and into the living room. With it came a generational leap in audio quality, a series of truly iconic soundtracks and, for the first time, composers who would go on to become infamous.

The Top Ten Foreboding Game Sounds. That’s right people. Whether it be fear of the unkown, or the certainty of what’s coming. PodQuest: The Musical Box #21: Musical explosion. In the 16th edition of The Musical Box, I explored the implementation of a dynamic musical theme in Phantasy Star III for the Sega Genesis. This was the oldest example I could find at the time I wrote the article. Fishing Boy. Press A To Listen: Kirby's Adventure and Xoc's music - @GameNTrain. NES Audio: Brief Explanation of Sound Channels. Using memorable, iconic sounds in video games. Press A to Listen Archives - GameNTrain. The Evolution of Video Game Music. Game Music & Sound History: From Pong to Final Fantasy. NAMCO Sound Player (Namco Sound Player) Using memorable, iconic sounds in video games. GameSpot Presents: A Brief Timeline of Video Game Music.

Play Were you a Nineties Gamer? iMUSE and the Secret of Organic Music from 1UP. The History of Sound Cards and Computer Game Music. LGR - Evolution of PC Audio - As Told by Secret of Monkey Island. The Sonic Spread » Exclusive: Memorable & Iconic Game Sounds. SoundWorks Collection: GDC2010: "Where it All Began" Sound Panel.