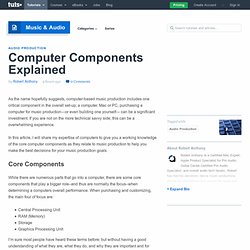 Mac or PC, purchasing a computer for music production—or even building one yourself— can be a significant investment. If you are not on the more technical savvy side, this can be a overwhelming experience. In this article, I will share my expertise of computers to give you a working knowledge of the core computer components as they relate to music production to help you make the best decisions for your music production goals. While there are numerous parts that go into a computer, there are some core components that play a bigger role–and thus are normally the focus–when determining a computers overall performance.

When purchasing and customizing, the main four of focus are: Central Processing UnitRAM (Memory)Storage Graphics Processing Unit The Central Processing Unit, or CPU and processor for short, can be thought of as the brain of the computer. The Future of Music Mastering for Multiple Distribution Channels – Music & Audio – Tuts+ I felt compelled to write about mastering audio for 2014 and onwards. 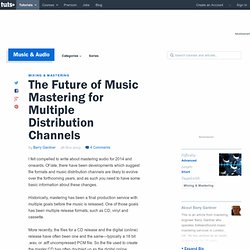 Of late, there have been developments which suggest file formats and music distribution channels are likely to evolve over the forthcoming years, and as such you need to have some basic information about these changes. Historically, mastering has been a final production service with multiple goals before the music is released. One of those goals has been multiple release formats, such as CD, vinyl and cassette. More recently, the files for a CD release and the digital (online) release have often been one and the same—typically a 16 bit .wav, or .aiff uncompressed PCM file. Drone music performance made with AudioCubes.

Fun with sea moss (or, basic digital sound devices) By Sebastian Tomczak. Please email stomczak@e-access.com.au for blah-blahing Please note that the construction of a square wave oscillator using a hex inverter integrated circuit and then using it to control a digital binary counter integrated circuit is taken from the excellent reference: pp 111-139. Collins, Nicolas 2006, Handmade Electronic Music: The Art of Hardware Hacking, TF-ROUTL. Index Digital Logic All of the schematics presented here in the 'Sound Devices' section operate on the premise of digital logic - that is, a reliance on two individual states used to represent information. Binary Numbers Multiple states can be encoded as information when considering a set of 1s and 0s. 1s and 0s and Electricity. Make a mellotron out of walkmans – Weekend Projects Podcast.

Freqout. --- Duration extension Here's some minor tweaks to the above to extend it just a bit. 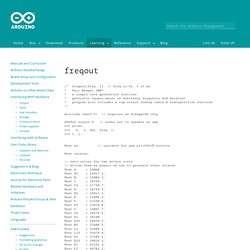 I left the above untouched cause it's simplicity is great. Basically, I changed the array to have durations and added a sentinel to mark the end. Gian Pablo @ ITP: Generating polyphonic sound with Arduino. A lot of projects could use high-quality musical sounds generated without the use of a full-blown computer. 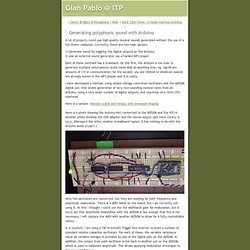 Currently, there are two main options: 1) Generate sound by toggling the digital outputs on the Arduino 2) Use an external sound generator, say a hacked MP3 player Each of these methods has a drawback: for the first, the Arduino is too slow to generate multiple simultaneous audio tones AND do anything else, eg. significant amounts of I/O or communication; for the second, you are limited to whatever sounds are already stored in the MP3 player, and it is costly.

I have developed a method, using simple voltage-controlled oscillators and the AD5206 digital pot, that allows generation of very nice-sounding musical tones from an Arduino, using a very small number of digital outputs, and requiring very little CPU overhead. PbSynthCode. BLOG. The MidiVox CV sketch has been updated to work with Arduino 1.0 - grab it here Also be sure to use the new version of the Midi Library as well! 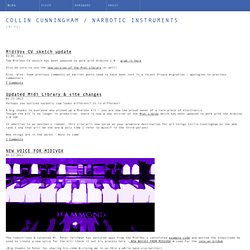 Also, also: Some previous comments on earlier posts seem to have been lost in a recent Disqus migration - apologies to previous commenters. Perhaps you noticed narbotic.com looks different? It is different! A big thanks to everyone who picked up a MidiVox kit - you are now the proud owner of a rare piece of electronics.Though the kit is no longer in production, there is now a new version of the Midi Libray which has been updated to work with the Arduino 1.0 IDE. In addition to an aesthetic reboot, this site will now serve as your premiere destination for all things Collin Cunningham on the web. Yamaha YM2612. Yamaha YM2612 The YM2612, aka OPN2, is a six-channel sound chip developed by Yamaha. 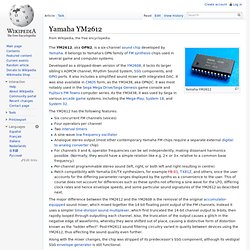 It belongs to Yamaha's OPN family of FM synthesis chips used in several game and computer systems. Developed as a stripped-down version of the YM2608, it lacks its larger sibling's ADPCM channel, Rhythm Sound System, SSG components, and GPIO ports. It also includes a simplified sound mixer with integrated DAC. It was also available in CMOS form, as the YM3438, aka OPN2C.