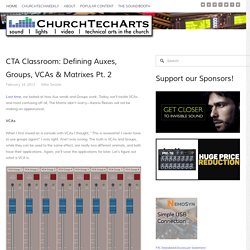 Without getting super-technical, think of a VCA as a remote control for your fader. That might not seem very useful at first, considering you already have the fader right there. Where it gets fun is that you can assign multiple channels to a VCA, and you can assign a channel to multiple VCAs. More on that later. Here’s how a VCA works (at least functionally—look it up if you want to know how they work electrically): Let’s say you have your lead vocal—channel 1—assigned to VCA 1.

Later we’ll talk about why this is useful, but for now, that’s how they work. CTA Classroom: Using Auxes, Groups, VCAs & Matrixes Pt. 3 — ChurchTechArts. Think of each row of aux controls as another row of faders, but instead of moving up and and down, they rotate. 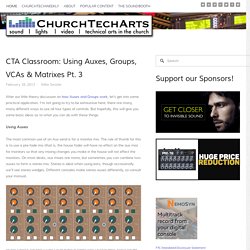 By adjusting the levels of each of your channels in an aux mix, you build that mix for a monitor. At least that’s one use. CTA Classroom: Using Auxes, Groups, VCAs & Matrixes Pt. 4 — ChurchTechArts. I’ve also created a single band VCA in the past that controlled all instrument and vocal inputs. 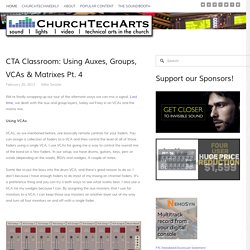 I didn’t use it for mixing, but for taking the entire band out in one button press (on that desk, a VCA mute muted all the channels, including monitors). I still had my individual VCAs as well, and I did some mixing on them. Any time you want to control a group of inputs as a whole, a VCA is a great way to go. Drums are a perfect example because once you get the various drum mic's dialed in and sounding like a kit, you typically want to raise and lower the level of the drums, not the toms and hat (well sometimes you do…).

The VCA will maintain the relative mix balance between the channels but give you “master” volume control over all of them. Background vocals are similar. Using the Matrix For a novice sound engineer, a matrix mix can be really confusing. I knew that. As I mentioned in the descriptive post on the matrix, modern digital consoles have blurred the definition of a matrix. {{translationsGeneral.htmlTitle[language]}} Oxium. Performance synthesizer ! 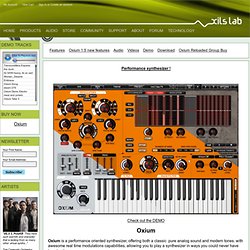 Check out the DEMO Oxium Oxium is a performance oriented synthesizer, offering both a classic pure analog sound and modern tones. with awesome real time modulations capabilities, allowing you to play a synthesizer in ways you could never have imagined. Due to its simple and intuitive user interface Oxium is fast and easy to operate: Classic instruments : Use up to 8 Xils-lab thick and musical oscillator wave forms per patch and shapes them with the double filter structure. Listen to Oxium ----> or Read more ----> Music Unit. NASA’s stream. Online Ear Training Games. Software - IMTR. Everything is a Remix. BCF2000 and plugin control. The #1 platform for free music. Free music downloads for private use - Royalty free music licenses for commercial purposes. More than 55,000 albums by independent artists. Agenda. List of video game musicians.

The following is a list of computer and video game musicians, those who have worked in the video game industry to produce video game soundtracks or otherwise contribute musically. 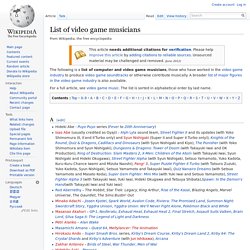 A broader list of major figures in the video game industry is also available. For a full article, see video game music. The list is sorted in alphabetical order by last name. WiiMote and GlovePie is MIDI. Prerequisites (what you need to get it working): Hardware ComputerBluetooth adapter (an adapter for using an open wireless protocol for exchanging data over short distances). 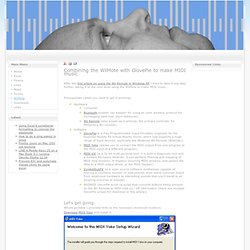 Wii Remote (also known as a wiimote, the primary controller for Nintendo's Wii console)Software GlovePie(is a free Programmable Input Emulator, originally for the Essential Reality P5 Virtual Reality Glove, which now supports a huge range of input devices, especially the Nintendo Wii Remote (Wiimote))MIDI Yoke (allows you to connect the MIDI output from one program to the MIDI input of a different program)MIDI-OX (is a 32 bit multi-purpose tool: it is both a diagnostic tool and a System Exclusive librarian. 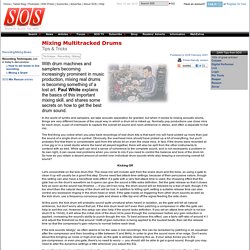 Paul White explains the basics of this important mixing skill, and shares some secrets on how to get the best drum sound. In the world of synths and samplers, we take acoustic separation for granted, but when it comes to mixing acoustic drums, things are very different because of the usual way in which a drum kit is miked up. Normally pop productions use close mics for each drum, a pair of overheads to capture the overall kit sound and room ambience in stereo, and often a separate hi-hat mic. PowerPlay Musical Instrument Insurance Policy from Allianz. Sound Byte: The Father of Computer Music - Max Mathews - Features at GameSpot. VSL Tutorials. Music Licensing Opportunities Television, Movies, Radio, Labels. VST Plugins Free - Virtual instruments and effects.