#1 Audio Programming Tutorial: Project Setup. Pure Data and libpd: Integrating with Native Code for Interactive Testing. Over the past couple of years, I’ve built up a nice library of DSP code, including effects, oscillators, and utilities. 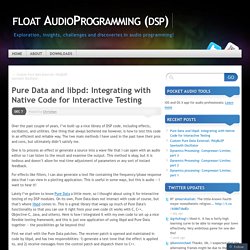 One thing that always bothered me however, is how to test this code in an efficient and reliable way. The two main methods I have used in the past have their pros and cons, but ultimately didn’t satisfy me. One is to process an effect or generate a source into a wave file that I can open with an audio editor so I can listen to the result and examine the output. This method is okay, but it is tedious and doesn’t allow for real-time adjustment of parameters or any sort of instant feedback. For effects like filters, I can also generate a text file containing the frequency/phase response data that I can view in a plotting application. Lately I’ve gotten to know Pure Data a little more, so I thought about using it for interactive testing of my DSP modules.

First we start with the Pure Data patches. Receiver patch, opened by libpd. Gapless looping MP3 tracks. The MP3loop utility, user interface This article has two objectives: to be a "how-to" guide for creating an MP3 track that can loop gaplessly, and to give the details of how it works. 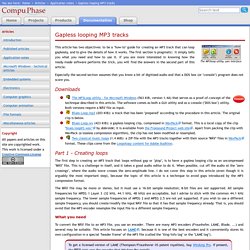 The first section is pragmatic: it simply tells you what you need and how to use it. If you are more interested in knowing how the ready-made software performs the trick, you will find the answers in the second part of this article. Especially the second section assumes that you know a bit of digitized audio and that a DOS box (or "console") program does not scare you. Downloads The MP3Loop utility - for Microsoft Windows (563 KiB, version 1.4A) that serves as a proof-of-concept of the technique described in this article. Game Audio Programming Salon June 2014 Part I: David Thall. Game Audio Programming Salon June 2014 on Livestream.

What Game Programming Job has a high demand that most people don't want to do? : gamedev. DSP Audio Programming Series: Part 2. It’s been quite some time since part 1 of this series (all the way back in June of last year) where we looked at and implemented a basic delay effect. 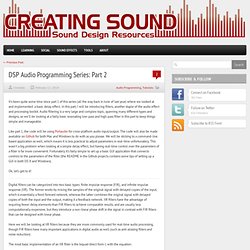 In this part, I will be introducing filters, another staple of the audio effect and processing toolkit. Game Programming Algorithms and Techniques: Overview. This chapter provides a brief history of the evolving roles of game programmers through the different eras of video game development. 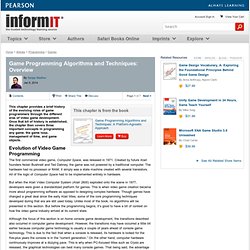 Once that bit of history is established, the chapter then covers three important concepts in programming any game: the game loop, management of time, and game objects. The first commercial video game, Computer Space, was released in 1971. Created by future Atari founders Nolan Bushnell and Ted Dabney, the game was not powered by a traditional computer. The hardware had no processor or RAM; it simply was a state machine created with several transistors. All of the logic of Computer Space had to be implemented entirely in hardware. But when the Atari Video Computer System (Atari 2600) exploded onto the scene in 1977, developers were given a standardized platform for games. Audio Programming Primer. Heading into the world of audio programming may seem a little daunting at first, even with prior programming experience. 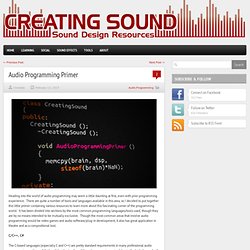 There are quite a number of tools and languages available in this area, so I decided to put together this little primer containing various resources to learn more about this fascinating corner of the programming world. It has been divided into sections by the most common programming languages/tools used, though they are by no means intended to be mutually exclusive. Though the most common areas that involve audio programming would be video games and audio software/plug-in development, it also has great application in theatre and as a compositional tool. 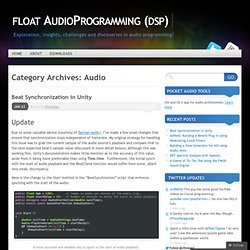 One is to convert audio into a sampling rate needed by a particular system or engine (e.g. converting 48kHz audio to the required 44.1kHz required by CDs). The second is to avoid aliasing during signal processing by raising the Nyquist limit. I will be discussing the latter. Programming Sound with Pure Data. About this Book 196 pages Published: Release: P1.0 (2014-01-28) ISBN: 978-1-93778-566-6 Add sound effects or music to your web, Android, and iOS apps and games—sound that can react to changing environments or user input dynamically (at least in the native apps). 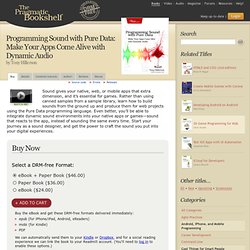 You can do all this with Pure Data, a visual programming language for digital sound processing. Programming Sound with Pure Data introduces and explores Pure Data, building understanding of sound design concepts along the way. You’ll start by learning Pure Data fundamentals and applying them, creating realistic sound effects. Whether you’ve had some experience with sound synthesis, or are new to sound design, this book is for you. 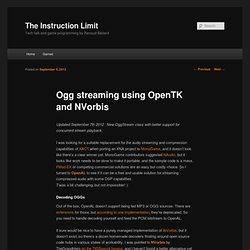 I was looking for a suitable replacement for the audio streaming and compression capabilities of XACT when porting an XNA project to MonoGame, and it doesn’t look like there’s a clear winner yet. MonoGame contributors suggested NAudio, but it looks like work needs to be done to make it portable, and the sample code is a mess. FMod EX or competing commercial solutions are an easy but costly choice. Audio Programming Primer. DSP Audio Programming Series: Part 1. It’s been a little while since the last audio programming post here at Creating Sound. I spent some time trying to decide on a good, straightforward way to introduce DSP effects programming without having to deal with the complications of creating plug-ins, or having to statically write the result to an output file (boring!).

The clear answer was to use Portaudio to interface with the PC audio system. FRACT Audio Tech: Wrapping Pure Data. Tuesday 2013.06.04 In last week’s post, I discussed how we decided to integrate Pure Data though a native Unity plugin. 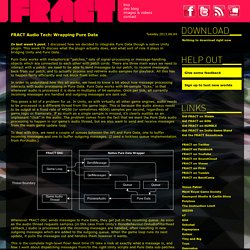 This week I’ll discuss what the plugin actually does, and what sort of role it plays in bridging Unity and Pure Data. An Interview with Nicolas Fournel. Nicolas Fournel is an audio programmer, and founder of “tsugi” (tsugi-studio.com), a company based in Japan that does R&D (including tools development) for video games, animation, music, and other disciplines. 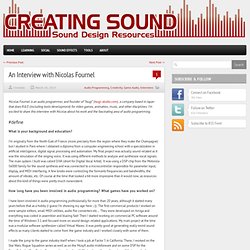 I’m excited to share this interview with Nicolas about his work and the fascinating area of audio programming. #define What is your background and education? I’m originally from the North-East of France (more precisely from the region where they make the Champagne) but I studied in Paris where I obtained a diploma from a computer engineering school with a specialization in artificial intelligence, digital signal processing and automation. My final project was actually sound-related as it was the simulation of the singing voice.

Visualizing Music with FMOD and OpenGL. Game Audio - Introduction to Audio API's, and Comparison between Xact, FMOD, Wwise, And Unreal. Meshula/LabMidi. Adding Cue Points to Wav files in C - Bleeps and Pops. Adding Cue Points to Wav files in C Wave files have the ability to contain Cue Points, a.k.a. Markers, a.k.a. Effective HTML5 game audio. Audio implementation for iOS devices. Audio is the unsung hero of most productions. And that truth remains when it comes to developing audio for mobile devices. Gamasutra has a great article discussing the challenges sound designers face when it comes to mobile. This article deals specifically with iOS devices. It is well worth reading. Here are the highlights: Asset Size – With Apple’s over the air size limit of 20MB, even if you are lucky to get half of that, you are left with only 10MB.