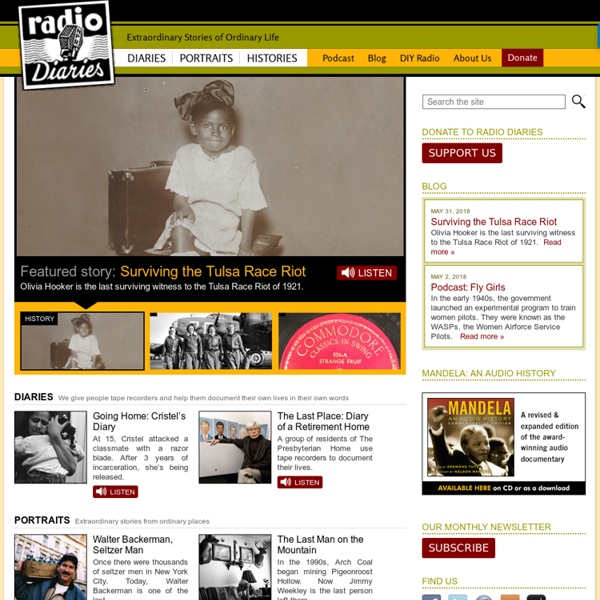 Breaking News English Breaking News English Home | Help This Site The 1,000 Ideas &Activities e-Book Sean's 9 Other Free Materials Websites Listen to the 20 Questions. Put the words below in the correct order to make the questions. Amy Chua – Think Again - a Big Think Podcast #137 – U.S. and Them Subscribe on Google Play, Stitcher, or iTunes Come talk to us on Twitter: @bigthinkagain I don’t know about you, but for me, middle school was horrible. I arrived at an all-male school in a still very homophobic era as a small, nervous, Michael Jackson fanatic.

The Connected Classroom - News Kids need the news presented to them in a manner that they can understand with the background that they may not have learned yet. Here are some sites that gives the kids the news that they need to know. CNN Student News BBC Radio 4 - Desert Island Discs, Tracey Thorn Tracey Thorn, musician and writer, is interviewed by Lauren Laverne. Tracey Thorn, musician and writer, is best known as one half of the duo Everything but the Girl. Brought up in Brookmans Park, Hertfordshire, she bought her first guitar, a black Les Paul copy, when she was 16 and her first band was called the Stern Bobs. Shortly after, she formed her own all-female band, Marine Girls, before moving to Hull University to study English. Listening Listening Lessons Dogs, Dogs, Dogs - Idioms and phrases using the word 'Dog'. Get the phone! - A listening exercise. Listen to the phone conversation and then answer the questions.

A sophisticated first novel introduces readers to death row Listen Story audio Aug 1, 2013 37min 9sec Elizabeth L. Silver's debut novel introduces readers to Noa P. Singleton, a woman on death row for murder. The mother of her victim, a lawyer, helped put her there — but now she's had a change of heart. The older woman will help Noa avoid execution, she says, if Noa will explain what led her to commit the murder.