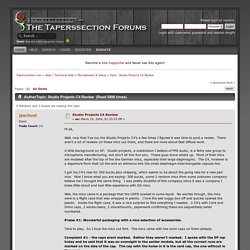 There aren't a lot of reviews on these mics out there, and there are none about field diffuse work. A little background on SP: Studio projects, a subdivision I believe of PMI audio, is a fairly new group to microphone manufacturing, but don't let this fool you. These guys know whats up. Most of their mics are modeled after the top of the line German mics, especially their large diaphragms. I got my C4's new for 300 bucks plus shipping, which seems to be about the going rate for a new pair now.

Well, the mics came in a package that the USPS soaked in some liquid. Praise #1: Wonderful packaging with a nice selection of accessories. Time to play. Complaint #1 - the caps arent marked. I unscrewed the caps to see what the underside was like. Rc 2 manual 476265. Top Tricks To Engage Audiences With Looping - Looping Live. Source: Phil Stendek, Facebook All the world champs (DubFX, Ricoloop, Shlomo, Tioneb, Naoryu, Grison Beatbox) use this technique in their performances and it is exhilarating to witness –says Phil Stendek. 1. 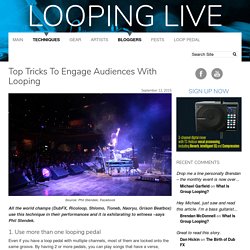 BOSS RC-2 Loop Station - How to. How to Use a Guitar Looper And Blow People’s Minds - Coustii. Interested in guitar loop pedals? 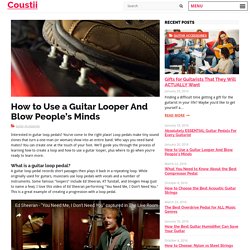 You've come to the right place! A Simple Trick That Will Make Your Dialogue Sound Better & Stand Out in the Mix. Mixing dialogue for maximum impact and clarity can be challenging, especially within the context of a mix that has multiple tracks of sound effects and music. 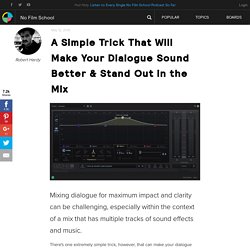 There's one extremely simple trick, however, that can make your dialogue stand out from everything else in the mix, which makes it easier for your audience to focus on and comprehend said dialogue. How To Make Your Location Seem Like Something It's Not - Indie Tips. DR 40 Manual. The Invisible Mic & DIY Lighting! PRO TIP: Lavalier Mics. Search Audio Sounds. 7 Simple Steps to Help You Shoot an Interview. In a fantastic video from B&H and Chase from Zacuto, we get some simple tips for shooting interviews, whether you're in a studio or on location: Topics discussed include assessing the physical space, any ambient and/or lighting considerations, setting up lights and the types of lights you might want to use,’ choosing the right type of mics based on the shooting environment, camera positioning, and other details required to produce professional-looking video interviews. 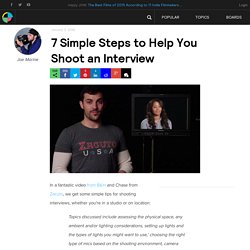 Beyond the technical details, I think one of the most important aspects of shooting interviews is that you help your subject feel comfortable, which is step number 7. For people who aren't on camera often, having a camera in their face and lights blasting them isn't the most natural setting, and often people tense up when they're going to be interviewed. If you want truly natural reactions, already having your cameras and sound rolling before the interviewee sits down can have a dramatic difference. The Art and Technique of Postproduction sound.

By Elisabeth Weis (Cineaste, 1995) The credits for John Ford's My Darling Clementine (1946) include Wyatt Earp as technical consultant[1] but only one person responsible for all of postproduction sound (the composer). 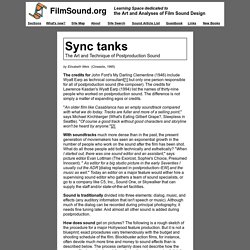 The credits for Lawrence Kasdan's Wyatt Earp (1994) list the names of thirty-nine people who worked on postproduction sound. The difference is not simply a matter of expanding egos or credits. "An older film like Casablanca has an empty soundtrack compared with what we do today. Tracks are fuller and more of a selling point," says Michael Kirchberger (What's Eating Gilbert Grape? With soundtracks much more dense than in the past, the present generation of moviemakers has seen an exponential growth in the number of people who work on the sound after the film has been shot. Sound is traditionally divided into three elements: dialog, music, and effects (any auditory information that isn't speech or music). Listen Up: The Art of Sound Editing Blockbuster Action Movies. You have never seen Becky Sullivan in a movie. 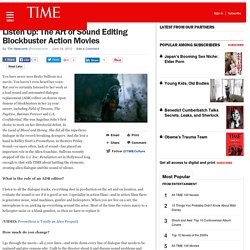 You haven’t even heard her voice. But you’ve certainly listened to her work as a lead sound and automated dialogue replacement (ADR) editor on dozens upon dozens of blockbusters in her 25-year career, including Field of Dreams, The Fugitive, Batman Forever and L.A. Confidential. She was Angelina Jolie’s first choice to work on her directorial debut, In the Land of Blood and Honey. She did all the superhero dialogue in the record-breaking Avengers. 7 Ways to Hide a Lavalier Microphone. 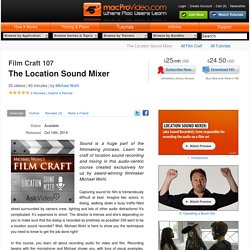 Learn the craft of location sound recording and mixing in this audio-centric course created exclusively for us by award-winning filmmaker Michael Wohl. Capturing sound for film is tremendously difficult at best. In this course, you learn all about recording audio for video and film. Next, you learn the ins and outs of the art of field recording.

(The) Art of Audio Recording: Recording Vocals. Whether you're working in a world-class audio environment with a million dollar console, or your spare bedroom with a beat up old ball mic, this tutorial shows you everything you need to know to record platinum sounding vocals into your DAW.Capturing crystal-clear vocals is one of the most important and most overlooked parts of song production. 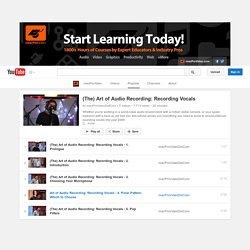 So how are vocals best recorded? Let the experts at Singing Canary show you the way! This tutorial starts with an explanation of room acoustics and microphone placement. Next, you'll learn some important tips about how to transform any room into an optimal vocal environment. With your room set up and ready to go, the tutorial moves on to a deep discussion of the different types of microphones, how they are used and how they shape the sound of the human voice. 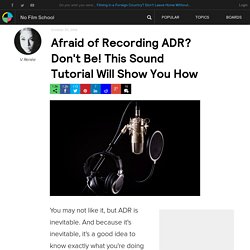 And because it's inevitable, it's a good idea to know exactly what you're doing when the time comes to record it. No matter how careful you try to be about getting clean audio -- unplugging electronics, hiring a mean, mean AD to scream, "Quiet on set! " -- there will always be a car horn, jet engine, or crew member having a sneezing fit that pollutes your recording. Thankfully, Filmmaker IQ has released a video, the fourth installment in their sound series, in which host John P. Hess walks you through his process of recording and editing ADR, sharing vital audio tips for those who may not know exactly how to approach it.